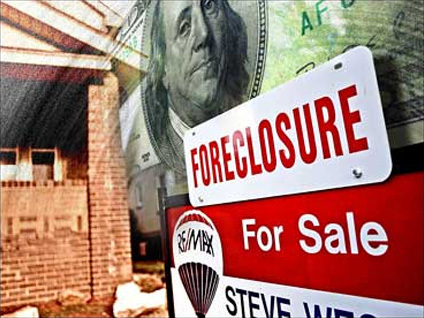 Legal officials in all 50 U.S. states are close to finalizing a multibillion-dollar settlement with the nation's biggest banks over their illegal foreclosure practices.

A settlement with Ally Financial, Bank of America (BAC), Citigroup (C), JPMorgan Chase (JPM), and Wells Fargo (WFC) is expected to be announced this week. It is said to include $25 billion in loan write-downs, refinancings, and other homeowner assistance, as well as cash penalties for the financial institutions. Banks also would have to correct legal problems in their foreclosure procedures.

The two sides have been negotiating the deal for more than a year, amid a spike in foreclosures since the housing crash. The biggest sticking points have been objections by the Attorneys General of California and New York. They have expressed concerns that the pact does too little to keep struggling borrowers in their homes and gives the banks too much protection from prosecution and civil suits.

The latest deal includes $17 billion in bank funding for measures to prevent foreclosures, such as lowering the mortgage principal for borrowers who owe more on their homes than they are worth, according to the New York Times. It also could lower interest rates on homeowners who are current on their loans. As many as 750,000 people who lost their homes to foreclosure since 2008 would be eligible for payouts of about $2,000 each under the deal, while keeping the right to join future lawsuits against their lenders or loan servicers.

In a restriction widely advocated by housing advocates, the settlement also would stop banks from foreclosing on homes while they are negotiating with the owners about easing their mortgage payments. Additionally, it would make the banks change how they interact with borrowers, requiring them to provide a single point of contact for homeowners seeking a loan modification. A common complaint among borrowers seeking mortgage relief is that they must deal with multiple employees at banks or servicers, making the modification process time-consuming and complex.

The settlement is a response to the numerous foreclosures cases around the country that have been found to include flawed and fraudulent documentation. The problem came to light in September 2010, when Ally Financial had to suspend foreclosures in 23 states. The move followed a lawsuit in which a single Ally employee was accused of signing off on tens of thousands of foreclosures without properly reviewing the related documentation. Such "robo-signing," along with a range of other questionable legal shortcuts, were soon found to be widespread in the mortgage industry.

California Attorney General Kamala Harris is believed to be the last holdout to the agreement. She favors providing narrow legal amnesty for the banks because, under California's False Claims Act,  the state and pension funds could collect sizable monetary damages if they could prove that banks improperly packaged mortgages into securities that lost value.