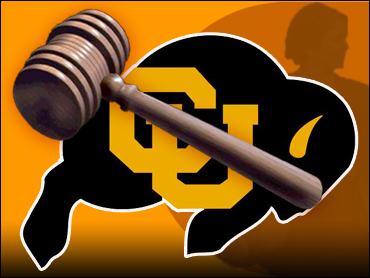 A special prosecutor will be appointed to look into the University of Colorado recruiting scandal, The Associated Press learned Friday.

The announcement will be made by Gov. Bill Owens and Attorney General Ken Salazar later Friday, three sources from the two agencies said on condition of anonymity. The men scheduled a news conference to "announce significant steps being taken regarding the situation" at Colorado.

The sources would not describe the nature of the prosecutor's role and what allegations will be investigated. University spokesman Bob Nero said he was not aware of the pending announcement and had no immediate comment.

The school was plunged into scandal a month ago when details surfaced in federal lawsuits filed against the university by three women who say they were raped by football players or recruits at or just after a 2001 off-campus party. The women say the school fostered an environment so hostile it contributed to their assault.

In all, seven women have accused Colorado football athletes of sexual assault since 1997, but no charges have been filed.

Head coach Gary Barnett was placed on administrative leave last week by CU President Elizabeth Hoffman after he had criticized the athletic ability of a female kicker who alleges a fellow player raped her when she was on the team.

A commission appointed by the university's board of regents will soon hold its first public meeting into allegations that the school used sex to lure football recruits, reports Rick Sallinger of CBS station KCNC.

Several dozen parents of University of Colorado football players spoke out in support of the program and their children Sunday, saying they were tired of seeing their sons painted with the broad brush of scandal.

They also expressed support for Barnett.

"We're proud to have our sons as part of the football program at the University of Colorado," said Ronnie Gordon, mother of an offensive lineman. "Give us back our coach."

"I've known this man to be a man of the highest integrity," said Gary Klatt, father of starting quarterback Joel Klatt.

Brad Littlehales, whose son Tyler is a wide receiver, described the charges against the program as a "general attack against our sons," and said the team was probably more united as a result of the scandal.

The parents said they wanted an investigation into the football program to go forward as quickly as possible.