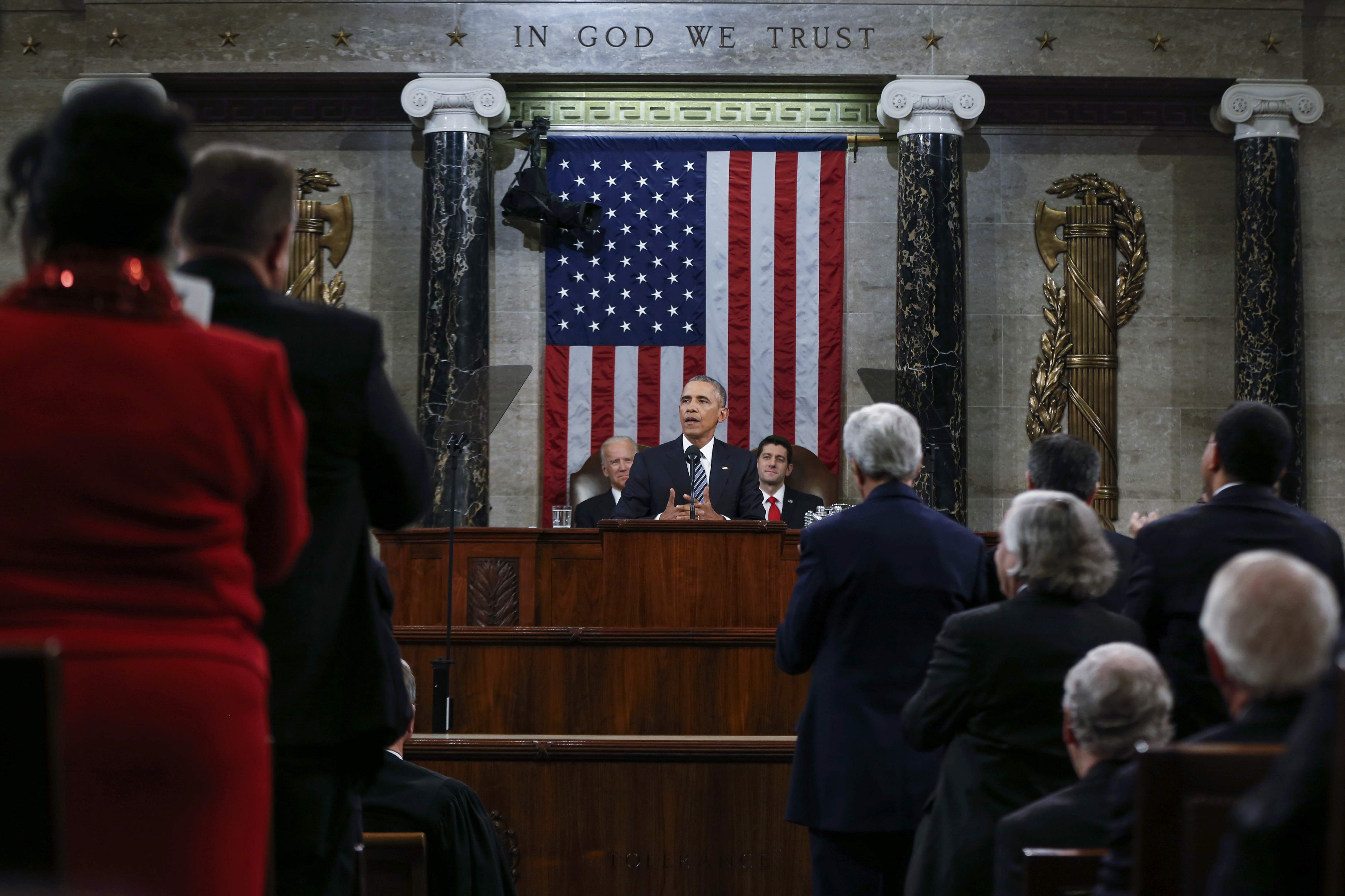 In this final State of the Union address of his presidency, President Obama issued a warning to the American public: The Union is strong and full of promise, but it risks being dragged down by partisan rancor and divisiveness.

The warning came with the stark acknowledgement that he failed to deliver on one of the core tenets of his 2008 presidential campaign: to be "a leader who can finally move beyond the divisive politics of Washington."

"It's one of the few regrets of my presidency - that the rancor and suspicion between the parties has gotten worse instead of better," Mr. Obama said in a uniquely humble moment of his address. "I have no doubt a president with the gifts of Lincoln or Roosevelt might have better bridged the divide, and I guarantee I'll keep trying to be better so long as I hold this office."

Even as he expressed his regret about this shortcoming, pleading with Americans to help him strive for "a better politics," Mr. Obama couldn't resist diving back into the political fray with combative remarks about the GOP.

"Democracy grinds to a halt without a willingness to compromise; or when even basic facts are contested, and we listen only to those who agree with us," the president said, in a clear repudiation of the Republican Party's 2016 front runner, Donald Trump. "Our public life withers when only the most extreme voices get attention."

Without ever explicitly naming Trump, Mr. Obama scolded the 2016 candidate for proposing to ban all Muslims from the U.S. "When politicians insult Muslims, whether abroad or our fellow citizens... that doesn't make us safer," he said. "That's not telling it like it is. It's just wrong. It diminishes us in the eyes of the world. It makes it harder to achieve our goals. And it betrays who we are as a country."

The president wasn't the only leader on Tuesday night to push back against Trump's divisive brand of politics. Delivering the GOP's official response to the State of the Union, South Carolina Gov. Nikki Haley similarly implored Americans to resist "the siren call of the angriest voices."

While Mr. Obama and Haley were seemingly in agreement that the nation should reject divisive rhetoric, the president on Tuesday night took aim at the entire GOP -- not just its controversial front runner.

He slammed conservatives for their reaction to the Islamic State, arguing that "over-the-top claims that this is World War III just play into their hands."

Mr. Obama also mocked GOP skepticism of climate change, stating, "Sixty years ago, when the Russians beat us into space, we didn't deny Sputnik was up there." Later in his remarks, the president added, "Look, if anybody still wants to dispute the science around climate change, have at it. You'll be pretty lonely,"

He also declared that "the American people have a choice to make" when it comes to the starkly different views between Democrats and Republicans over how to address income inequality. Seemingly dismissive of conservative economic concerns, the president said, "Food Stamp recipients didn't cause the financial crisis; recklessness on Wall Street did. Immigrants aren't the reason wages haven't gone up enough."

"Anyone claiming that America's economy is in decline is peddling fiction," the president said after rattling off a list of favorable economic statistics. Later in his speech, he waved off "all the rhetoric you hear about our enemies getting stronger and America getting weaker."

"Let me tell you something," he said. "The United States of America is the most powerful nation on Earth. Period. Period. It's not even close."

In the days leading up to the State of the Union, White House officials insisted the president would focus more on the future of the nation than on his own record. Yet Tuesday night, Mr. Obama dedicated a significant portion of time to noting his accomplishments, from helping 18 million Americans gain coverage under Obamacare to killing Osama bin Laden. He noted domestic achievements like lifting high school graduation rates and overseeing the longest streak of private-sector job creation in history. He also highlighted foreign policy achievements such as thawing relations with Cuba and stopping the Ebola epidemic.

While there were plenty of accomplishments for the president to list, he rarely received a unanimously positive response from the congressional audience before him. Both Democrats and Republicans wholeheartedly applauded the president's assertion that the U.S. military remains "the finest fighting force in the history of the world." Both parties were pleased with the president's announcement that Vice President Joe Biden will lead a new national effort to find the cure for cancer. Otherwise, the chamber remained divided.