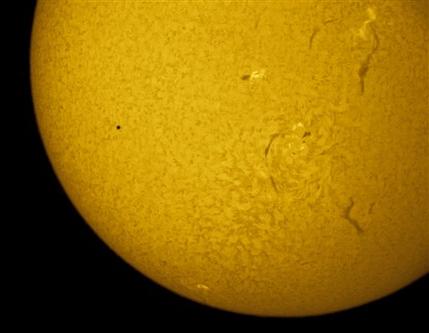 CAPE CANAVERAL, Fla. -- For the first time in 10 years, Mercury passed directly between the Earth and sun on Monday, resembling a black dot against the vast, glowing face of our star.

Many stargazers turned to the Internet as NASA provided close-to-real-time images of the 7½-hour trek, courtesy of the Solar Dynamics Observatory.

Although the solar system's small, innermost planet appeared to be trudging along, it actually was zooming past the sun at 106,000 mph.

The cosmic show - which began at 7:12 a.m. EDT - was visible from the eastern U.S. and Canada, as well as Western Europe, western Africa and most of South America. Those places were privy to the entire event. The audience grew as the sun rose across North America, revealing Mercury's relatively rare transit. In Eastern Europe, the Middle East, central Asia and most of Africa, sunset had the curtain coming down early. Australia, New Zealand and New Guinea missed out altogether.

NASA warned spectators to use high-powered binoculars or telescopes equipped with special filters to protect their eyes from the glaring sun. Eclipse glasses were useless for spotting 3,000-mile-wide Mercury as it crossed the 864,000-mile diameter of the sun.

A transit of Mercury occurs only about 13 times a century. The last time the solar-planetary ballet happened was 2006. The next transit of Mercury won't occur until 2019, and there won't be another after that until 2032. The event is so rare because the innermost planet's orbit is inclined by about 7 degrees compared to that of Earth, so Mercury, the sun and our home planet just don't line up all that often.

"What happens during a transit is really all about perspective," said Jim Green, director of NASA's planetary science division, who viewed his first transit of Mercury 46 years ago.