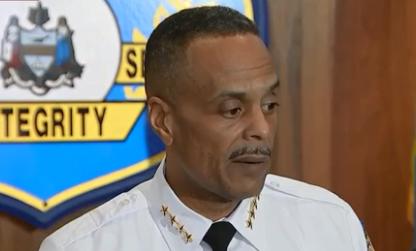 PHILADELPHIA -- Philadelphia police apologized Thursday over the controversial arrests of two black men at a Starbucks April 12. The incident has sparked protests and calls for a boycott on social media, and the company has made repeated apologies.

In a recording of a 911 call placed by a Starbucks employee, the woman is heard saying, "Hi, I have two gentlemen in my cafe that are refusing to make a purchase or leave." She gives the address of the Starbucks store. The entire call lasts less than 30 seconds.

Ross said that the responding officers at first tried for about 10 minutes to negotiate with the men in an attempt to get them to leave the store, operating under a mistaken understanding of the store's policy.

"You can't expect them to walk into every business and intuitively know what their policy is," Ross said.

Ross had initially said the officers had done nothing wrong, but said Thursday that wasn't the best language to use. He said he should have said that the officers followed the law.

Ross said that he "failed miserably" in the messaging around the arrests. He said that the issue of race is not lost on him and he shouldn't be the person making things worse.

He says the police department did not have a policy for dealing for similar situations, but does now. He says it will be released soon.

He apologized to the men, the officers and the city and pledged to "do better."

Speaking to Gayle King on "CBS This Morning," Starbucks' executive chairman Howard Schultz said he is "embarrassed" and "ashamed" by the incident. The company has said the employee who called 911 is no longer at the store.

"I think what occurred was reprehensible at every single level," Johnson said. "I think I take it very personally as everyone in our company does and we're committed to making it right."