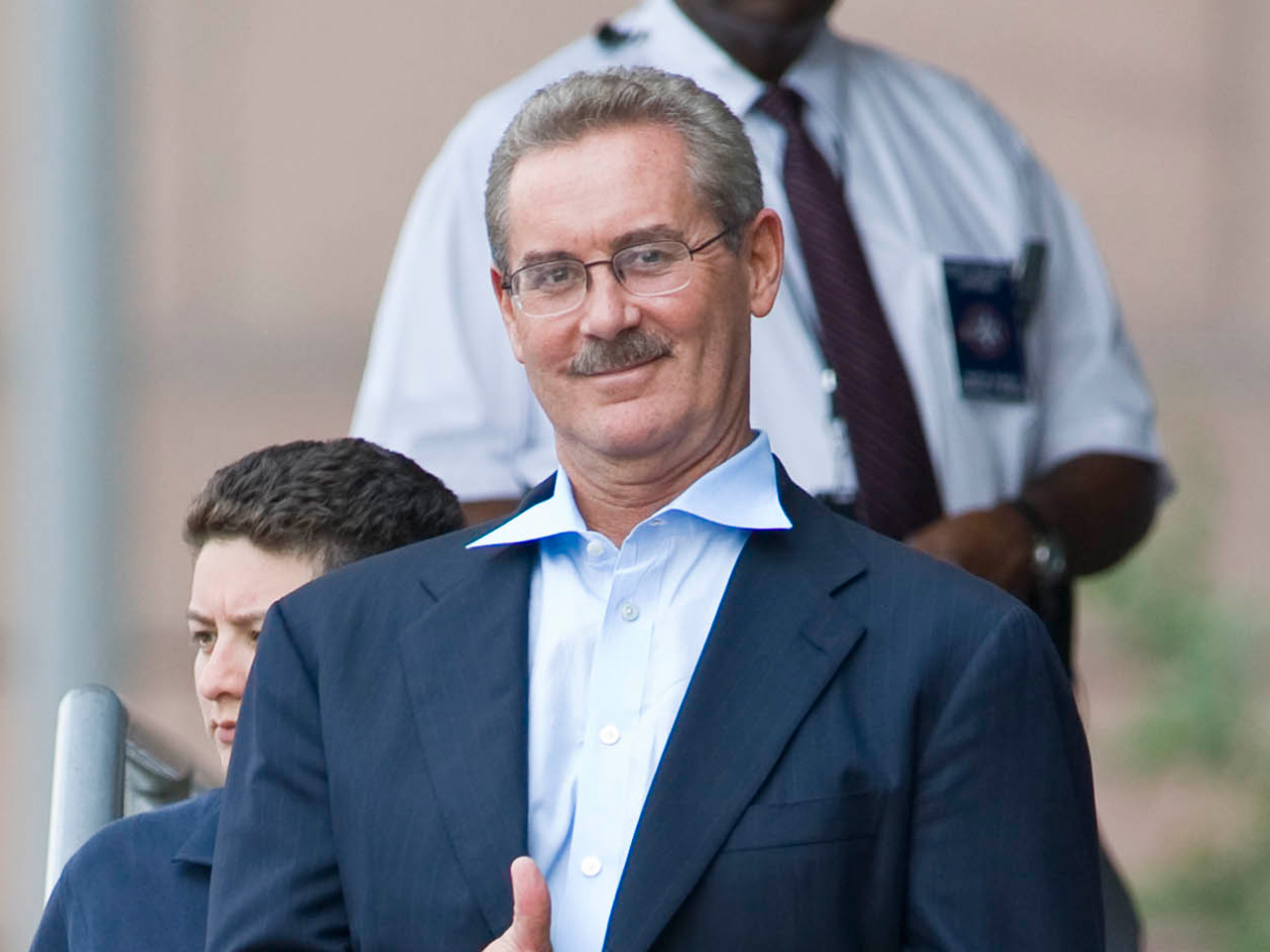 (AP) HOUSTON - Former jet-setting Texas tycoon R. Allen Stanford, whose financial empire once spanned the Americas, was sentenced Thursday to 110 years in prison for bilking investors out of more than $7 billion over 20 years in one of the largest Ponzi schemes in U.S. history.

U.S. District Judge David Hittner handed down the sentence during a court hearing in which two people spoke on behalf of Stanford's investors about how his fraud had affected their lives.

Prosecutors had asked that Stanford be sentenced to 230 years in prison, the maximum sentence possible after a jury convicted the one-time billionaire in March on 13 of 14 fraud-related counts. Stanford's convictions on conspiracy, wire and mail fraud charges followed a seven-week trial.

Stanford to learn sentence for role in $7B swindle
Watch: Ex-Texas financier faces life in prison for Ponzi scheme

Stanford's attorneys had asked for a maximum of 44 months, a sentence he could have completed within about eight months because he has been jailed since his arrest in June 2009.

During Thursday's sentencing hearing, Stanford gave rambling statement to the court in which he denied he did anything wrong. Speaking for more than 40 minutes, Stanford said he was a scapegoat and blamed the federal government and a U.S. appointed receiver who took over his companies for tearing down his business empire and preventing his investors from getting any of their money back.

"I'm not here to ask for sympathy or forgiveness or to throw myself at your mercy," Stanford told Hittner. "I did not run a Ponzi scheme. I didn't defraud anybody."

Stanford was once considered one of the richest men in the U.S., with an estimated net worth of more than $2 billion. His financial empire stretched from the U.S. to Latin America and the Caribbean. But after his arrest, all of his assets were seized and he had to rely on court-appointed attorneys to defend him.

Calling Stanford arrogant and remorseless, prosecutors said he used the money from investors who bought certificates of deposit, or CDs, from his bank on the Caribbean island nation of Antigua to fund a string of failed businesses, bribe regulators and pay for a lavish lifestyle that included yachts, a fleet of private jets and sponsorship of cricket tournaments.

Defense attorneys portrayed Stanford, 62, as a visionary entrepreneur who made money for investors and conducted legitimate business deals. They accused the prosecution's star witness - James M. Davis, the former chief financial officer for Stanford's various companies - of being behind the fraud and tried to discredit him by calling him a liar and tax cheat.

The jury that convicted Stanford also cleared the way for U.S. authorities to go after about $330 million in stolen investor funds sitting in the financier's frozen foreign bank accounts in Canada, England and Switzerland.

But due to legal wrangling, it could be years before the more than 21,000 investors recover anything, and whatever they ultimately get will only be a fraction of what they lost.

The financier's trial was delayed after he was declared incompetent in January 2011 due to an anti-anxiety drug addiction he developed in jail. He underwent treatment and was declared fit for trial in December.

Three other former Stanford executives are scheduled for trial in September. A former Antiguan financial regulator was indicted and awaits extradition to the U.S.

Stanford and his former executives also are fighting a lawsuit from the U.S. Securities and Exchange Commission that accuses them of fraud.