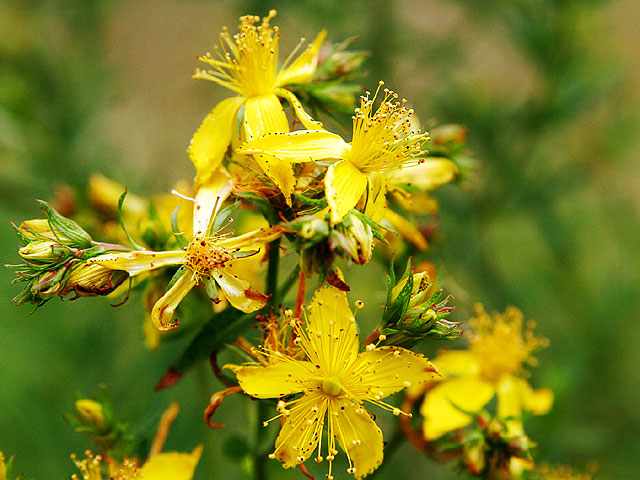 St. John's wort is a popular herbal therapy for depression, but a new Australian study highlights the fact that "natural" does not always equal "safe."

Using reports filed with Australia's drug safety agency, the researchers found that adverse reactions to St. John's wort were similar to those reported for the antidepressant fluoxetine -- better known by the brand name Prozac.

Those side effects included anxiety, panic attacks, dizziness, nausea and spikes in blood pressure, the researchers reported in the July issue of Clinical and Experimental Pharmacology and Physiology.

"It's concerning to see such severe adverse reactions in our population, when people believe they are doing something proactive for their health with little risk," lead researcher Claire Hoban, of the University of Adelaide, said in a university news release.

Research has shown that St. John's wort can help ease mild to moderate depression. But the fact that it works also means there is a risk of side effects, said Dr. Samar McCutcheon, a psychiatrist at Ohio State University Wexner Medical Center in Columbus.

"Even if the bottle says 'natural' or 'herbal,' it still has ingredients that are active in your body," said McCutcheon, who was not involved in the study.

It has long been recognized that St. John's wort can have significant side effects and interact with certain medications, McCutcheon pointed out.

But many consumers may not know that, she noted, largely because dietary supplements are not regulated in the way that drugs are.

"I definitely think this [lack of awareness] is still an issue," McCutcheon said. "People think St. John's wort is safe because they can buy it at a health food store."

In the United States, dietary supplements do not have to be studied for safety and effectiveness before they reach the market.

"Plus," McCutcheon said, "you're relying on companies to make sure these products include the ingredients they're supposed to, and keep out ingredients that they shouldn't."

The situation is similar in Australia, and many consumers there are unaware that supplements are largely unregulated, according to Hoban's team.

The researchers based their findings on doctors' reports to Australia's national agency on drug safety. Between 2000 and 2013, there were 84 reports of adverse reactions to St. John's wort, and 447 reports on Prozac.

But since those are voluntary reports, they do not reflect the actual rate of side effects from either therapy, according to the researchers. And, Hoban said, bad reactions to St. John's wort are particularly likely to go unreported, since the herb is often not even considered a drug.

According to McCutcheon, it's important for people with depression symptoms to see a health professional before self-medicating with St. John's wort. "That will help ensure you have the right diagnosis," she said.

If your symptoms are actually part of a different disorder, St. John's wort may be ineffective -- or possibly even risky. For example, McCutcheon said that in people with bipolar disorder, the herb might fuel a manic episode.

But possibly the biggest concern, she said, is the potential for St. John's wort to interact with commonly used medications.

The herb can dampen the effectiveness of birth control pills, blood thinners and heart disease drugs, along with some HIV and cancer drugs, according to the U.S. National Center for Complementary and Integrative Health.

What's more, it can interact with antidepressants. It's not clear exactly how St. John's wort works, McCutcheon said, but it's thought to boost levels of the brain chemical serotonin -- which is how the most commonly used antidepressants work.

"If you use the two together, you run the risk of having too much serotonin," she said. And that raises the risk of a potentially fatal condition called serotonin syndrome, whose symptoms include confusion, tremors, diarrhea and a drop in body temperature.

Some side effects of St. John's wort are caused by the herb itself, such as skin rash that's worsened by sunlight, said Dr. John Reed, director of inpatient services at the University of Maryland's Center for Integrative Medicine in Baltimore.

But the main concern is still its potential for interacting with other medications, he said. "Compared with other herbs, St. John's has more drug interactions," Reed explained. "So if you're using it, don't take other medications unless it's under medical supervision."

He added that anyone on any medication should do some homework before starting an herbal product. "Go online and do a search for drug interactions. Ask your pharmacist or doctor," Reed advised.

"Unfortunately," he said, "this type of information [on drug interactions] doesn't have to be printed on product labels."

The bottom line, according to McCutcheon, is that people with depression should talk to their providers about any supplements they take, or want to take. And those providers, she said, should be willing to have nonjudgmental discussions.

"I want all my patients to be comfortable enough to bring up anything with me," McCutcheon said.