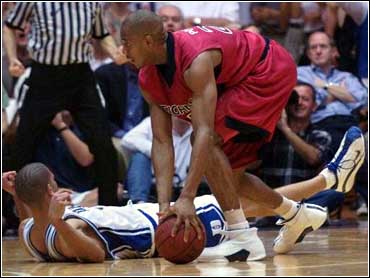 "We didn't play poorly," said Krzyzewski, who likes to examine his team in late February against a tough non-Atlantic Coast Conference team. "If we would have played poorly we would have gotten run out of the gym.

"I thought we played great at times, but we didn't compete for the full 40 minutes, and to win big-time games like this you've got to do that."

Duke beat St. John's (20-6) in overtime at Madison Square Garden last season as Thornton had 40, and the teams put on another classic in steamy Cameron Indoor Stadium as the Red Storm won its seventh straight.

"This team is being themselves and they're having a lot of fun do it," Red Storm coach Mike Jarvis said.

"This has been an incredible week, starting with (wins) over Syracuse, Connecticut and now Duke. It's too bad the season doesn't end now."

Thornton scored 22 points this time with 11 rebounds and six assists. Carlos Boozer had 21 points for Duke and Nate James added 20.

The Blue Devils (22-4) had a chance to win it in the closing five seconds. After a timeout, Chris Carrawell's 15-footer bounced off the rim and into the corner as time ran out.

"That was the longest five seconds of my life," said Thornton, who was guarding Carrawell.

"If we hit the shot at the end, I'm not sure that we deserved to win as much as they did," Krzyzewski said. "Overall, I thought they played better than we did."

The loss was onlDuke's third against a non-conference team in Cameron since 1983 a span of 129 games.

"The resiliency that our kids showed in the game is a reflection of who they are, their character, where they have come from and where they want to do," Jarvis said.

Duke trailed by one at the half and 75-70 with 5:57 left before James and Jason Williams sank consecutive 3-pointers and Boozer had a dunk and a foul shot.

The lead changed hands three times over the final 1:18 as Chudney Gray of St. John's made two free throws, James sank a 3-pointer with 44.7 seconds left and Thornton nailed the game winner.

Thornton's winning shot came after Erick Barkley and Lavor Postell missed shots, but St. John's was able to get two of its 14 offensive rebounds.

"I'm just glad it went in," Thornton said of his winning shot. "I was shooting the same shot all game from the same side. It was enough to win."

All 10 starters hit double figures in a game that took on an NCAA tournament feel.

St. John's used a 15-3 run midway through the second half to take a seven-point lead as Duke struggled against a matchup zone. Some key plays by Boozer, Williams and James got the Blue Devils back into it and set up the hectic final minutes.

Illinois in 1995 and Michigan in '96 are the only other non-conference teams to beat Duke here in 17 years.

"In a one-game situation they are really a dangerous team," Krzyzewski said of St. John's. "They are old, well-coached and play with a lot of heart."

Duke went on a 22-5 run early in the first half after Krzyzewski called an early timeout to lecture his team on its intensity and defensive effort. Shane Battier scored 11 points in the spurt, giving the Blue Devils a 12-point lead.

Battier missed his last four shots as the Red Storm climbed back into it, closing the half with a 15-6 run to grab a one-point lead as Barkley scored seven and Thornton two baskets.