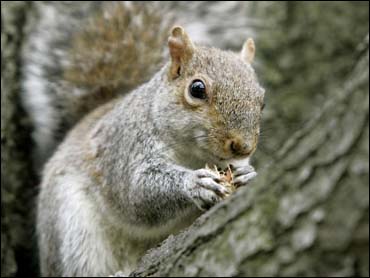 California ground squirrels have learned to intimidate rattlesnakes by heating their tails and shaking them aggressively.

Because the snakes, which are ambush hunters, can sense infrared radiation from heat, the warming makes the tails more conspicuous to them — signaling that they have been discovered and that the squirrels may come and harass them, explained Aaron Rundus, lead author of a study in this week's online edition of Proceedings of the National Academy of Sciences.

The tail "flagging" places the snakes on the defensive, he said.

Adult squirrels are not the snakes' prey, Rundus said in a telephone interview. The adults have a protein in their blood that allows them to survive the snake venom, and they have been known to attack and injure snakes, biting and kicking gravel at them.

Rather, the snakes are looking for immature squirrels, which they can kill and eat, said Rundus, who did the research while at the Animal Behavior Graduate Group at the University of California, Davis.

Researchers are not sure just how the squirrels cause their tails to heat up, but they think it may be by shunting warm blood from the body core into the tail.

"It's such a new discovery that it leaves a lot of questions," he said.

But apparently it isn't just a reflex, because they only do it with rattlesnakes.

Confronted by gopher snakes, which can't sense heat, the squirrels wave their tails vigorously, but don't bother to heat them up.

So how did they discover that the squirrels heat their tails?

The researchers were studying how squirrels reacted to various predators and noticed that with rattlesnakes they waved their tails even more in dark conditions than in the light.

That prompted the researchers to view the encounters using an infrared camera, and they discovered the squirrels' tails were much warmer than normal when dealing with rattlesnakes.

Learning more about these complex communication methods among animals may help improve understanding of how complex human communications have evolved, Rundus said.

He said it serves as a reminder that to understand more about animal life, we need to pay close attention to how animals act. "There is potentially a lot going on out there that we're not aware of," he said.
By Randolph E. Schmid