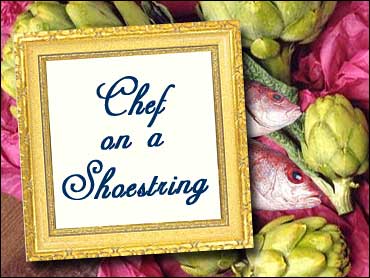 Chef Luke Palladino brings Italy to the shores of Atlantic City with his Italian cuisine.

Palladino is the executive chef of three Italian restaurants located inside the new Borgata Hotel, Casino and Spa in Atlantic City.

On his visit to The Saturday Early Show, we asked him to create a three-course Italian springtime meal for four on our $30 budget.

Palladino's menu as our Chef on a Shoestring: an appetizer of Venetian-style Artichokes; an entrée of Pesce all'Aqua Pazza: Fish in "Crazy Water" with Grape Tomatoes, Garlic, Parsley and Marjoram; and for dessert, Ricotta Zeppole.

Culinary success was foreseen early in Palladino's career, when his classmates at the Culinary Institute of America voted him "most likely to succeed." Upon graduating, Palladino decided to focus on Italian cuisine, the food of his family. First, he moved to Italy and spent more than three years immersed in local cooking traditions.

On his return to the United States, his education continued. Palladino worked under some of the country's most celebrated chefs, including Paul Bertolli, Jeremiah Tower, Emeril Lagasse and Todd English. From 1999 to 2001, he worked for English as executive chef at Onda Ristorante, at the Mirage in Las Vegas. He then moved to Aspen, Colo., where he was chef de cuisine at the local outpost of English's Olives restaurant.

Palladino has helped make Atlantic City, usually recognized for its gambling and boardwalk attractions, known for its food.

Terminology
Baby Artichokes: Baby artichokes are mature and are completely edible, after just a little trimming, because they haven't yet formed the fuzzy inner choke. Baby artichokes grow on the same plant as larger artichokes. They stay small because they grow closer to the ground and in the shelter of the large leaves of the plant. Baby artichokes cook in less time than their larger relatives and are perfect for quick sautes or to steam or simmer for appetizers, salads and main dishes. The smallest of the baby chokes are great sliced thin and enjoyed raw.

Red Snapper: Palladino cooked red snapper for his main course. Snapper is a versatile and popular fish, low in fat, flaky and can be cooked in numerous ways - such as poached, broiled, baked, sauted or fried.

Marjoram: Palladino uses the herb marjoram in the red snapper dish. This relative of oregano has a milder but more complex flavor than its cousin. Some describe the flavor as having a hint of balsam. In the past, marjoram has been associated with love. The Greeks made wreaths and garlands of sweet marjoram for marriage and funeral ceremonies. It was believed that Aphrodite, the goddess of love, created sweet marjoram as a gentle symbol of happiness. Legend has it that if you touch sweet marjoram before bedtime, you will dream of your future spouse.

Marjoram is an important flavoring in German sausages, and is used extensively in French, Italian and Portuguese cuisine. Marjoram and oregano were well known in the Roman-Greco era. The ancient Greeks believed that if Marjoram grew on one's grave, the deceased would enjoy eternal peace and happiness. The word "oregano" is Greek; derived and translated it means "Joy of the Mountain". Oregano was popular in ancient Egypt and Greece as a flavoring for vegetables, wines, meats and fish. If you can't find marjoram, you can use fresh oregano. Marjoram can be used in sausages, lamb, beef, pork, chicken, fish, tomato dishes, stuffings, breads, salad dressings and chowders.

Zeppoles: Chef Palladino made zeppoles for dessert. Zeppoles, a very popular Italian dish, are fried "puffs" that should be so light you might expect them to float away. Palladino says when making zeppoles you must use cake flour because it has less gluten, and will result in a lighter zeppole. Palladino says all-purpose flour is not suitable for making zeppoles.

Add the water, 1 tablespoon of olive oil and the salt to a small 1-quart pot. Cover with a lid and bring to a simmer using medium high heat.

Once the water is simmering, add the polenta slowly using a whisk to stir. Cover and lower heat and simmer very slowly for 30 minutes. (Remember to stir the polenta with whisk every 10 minutes.) Remove from the heat and keep covered in a warm place.

Add the garlic and the artichokes to the pan and gently fry in the oil until golden brown in color.

Once the artichokes are golden brown, season with salt and pepper. Add a 1/4 cup of water to the pan and cover it with a lid.

Cook for about five minutes or until the centers of the artichokes are tender. Add the parsley to the pan with the artichokes. Remove the pan from the heat.

How to prepare baby artichokes:

Rinse baby artichokes under running water or in a sink of cold water. Set out a large bowl of cold water and add about 3 tablespoons of lemon juice (juice of 1 large lemon), or vinegar to make acidulated water.

Trim the stem of the artichoke but don't cut it off. Drop the cut artichokes into the acidulated water as you work, to keep them from discoloring. (Discoloring doesn't affect flavor or appearance after the artichokes are cooked.)

Remove the artichoke leaves around the base by peeling back and snapping off until you reach leaves that are yellow at the bottom. Again, keep the cut artichokes in the acidulated water as you work.

Cut off the top third of the leaves (green portion) and discard. If you wish, trim off any remaining green from the base of the artichoke. Remember to put the cut artichokes back in the acidulated water.

Leave artichokes whole for this recipe. Keep in the acidulated water until ready to cook.

Chef's Note: If you're not using wine, use 1/2 cup of water and a squeeze of fresh lemon juice instead.

For the bread:
4 slices ciabatta or crusty Italian bread
olive oil
one garlic clove, smashed with a knife

Lightly toast the bread slices on a grill pan.

Method for the fish:

Rinse and dry the fish with paper towels. Season and rub the fish with salt, pepper and extra virgin olive oil and inside the cavity. Lay the fish in a roasting pan large enough to accommodate the entire fish.

Place roasting pan in oven. Roast for 10 minutes then add the white wine (or water and lemon juice) and grape tomatoes to the pan. Place back in oven for another 15 minutes.

Remove from the oven and let rest. Remove foil from the tail.

Place whole fish onto a warm serving platter and spoon the sauce over the fish. To remove the filets from the fish, run a fish or butter knife down the spine from the head to the tail, which lifts the meat off the bones. Flip filet over.

Transfer to a plate and spoon some of the sauce over the filet and the toasted bread.

Pre-heat vegetable oil to 350 degrees F in a heavy-bottomed pot or deep-fat fryer.

Using a spoon or a small ice cream scoop, dip the spoon into the mixing bowl and get a spoonful of batter, then drop in the hot oil. Fry until golden brown.

Remove with a slotted spoon, and drain on paper towels. Dust with powdered sugar immediately before serving.