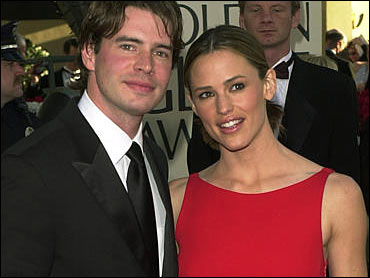 "Alias" star Jennifer Garner has filed for divorce from her husband, actor Scott Foley, six weeks after they announced they were separating.

Garner, 31, blamed irreconcilable differences for the breakup in papers filed in Superior Court, but provided no further details.

She and Foley met in 1998 on the set of "Felicity," the WB drama in which he co-starred. They married in October 2000. Foley, 30, recently starred in the sitcom "A.U.S.A.," which NBC has dropped from its prime-time lineup.

The couple's publicist announced April 1 that the actors had "mutually decided to separate." The court papers Garner filed Friday list the couple's separation date as March 23, the day of the Academy Awards. Garner, a presenter at the Oscars, attended without Foley.

Garner co-stars with Ben Affleck in the action movie "Daredevil" She's also set to star in "Elektra," a spinoff based on her "Daredevil" character.