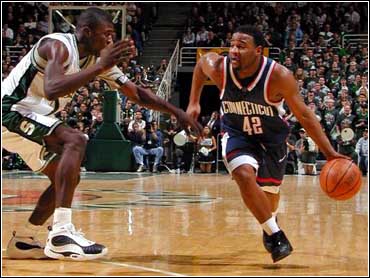 Charlie Bell opened each half with a 3-pointer as Michigan State bombed the Huskies 85-66 in a long-awaited battle between two of last season's Final Four teams Saturday.

"Just simply put, I'm astounded by the way we played or didn't play," said Calhoun, whose team beat the Spartans by 14 in a game last season at Storrs, Conn. "Michigan State played sensational basketball. They had such a high energy level."

The Spartans, aided by a 15-9 edge in offensive rebounds, scored 25 second-chance points and got 20 points off turnovers.

"I wanted to get a read on my team," Izzo said. "But that was obviously an off-day for UConn. You won't see them play like that again."