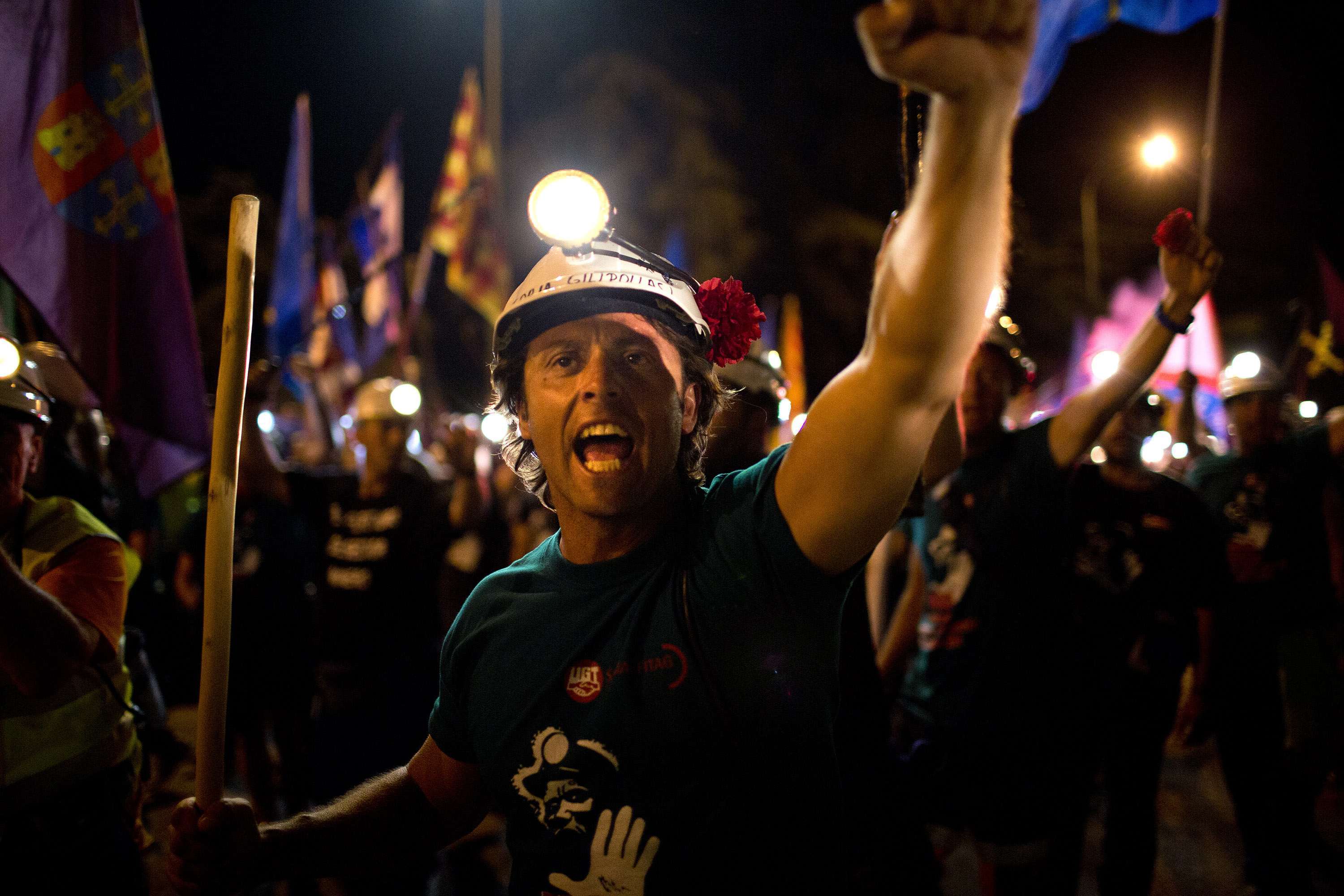 (AP) MADRID - Thousands of Spanish coal miners who fear for their livelihoods because of government cuts set off booming firecrackers Wednesday as they marched up Madrid's main avenue, some after trudging nearly three weeks from the country's beleaguered mining regions.

The miners, wearing hardhats and carrying walking sticks, snaked along the avenue under a hot sun, surrounded by huge puffs of firework smoke. They converged on the capital to protest a 63 percent cut in subsidies to mining companies imposed by the government as it battles a deep recession, a bloated deficit, and nearly 25-percent unemployment.

Their protest has inspired sympathizers who see their struggle as symbolic of the country's wider troubles and what they consider an unfair burden on the middle and working class. Miners who walked 18 days from northern and eastern mining regions were received as heroes in a march Tuesday night to Puerta del Sol, one of the city's main plazas.

David Menendez, 30, from the Asturias region in the north, came down by bus with relatives and fellow miners.

He has worked in the pits for 10 years and fears losing his job in an economy with few prospects for anything else. He wore a miner's hard hat and a black T-shirt that read "Proud to be a miner" on the front and "The miners' struggle" on the back.

"I'm here to defend my work," Menendez said. He added that he was outraged by new tax hikes and austerity measures announced by Prime Minister Mariano Rajoy's government just hours before the protest.

"Rajoy is committing crimes against the economy and killing it," Menendez said. "It's just cuts and more cuts."

The new spending cuts, designed to cut euro65 billion ($80 billion) of state budgets by 2015, include a new wage cut for civil servants and members of Parliament and a new wave of closures at state-owned companies.

Marcher Pepi Garcia, a 52-year-old hotel waitress, makes euro900 ($1,105) per month and has her 35-year-old daughter and 21-year-old son living at home with her. They are unemployed and have never had jobs lasting more than six months.

"I'm not here just to show solidarity," she said. "We have to protest to stop the madness that is happening in Spain."

She added, "Rajoy is defending the banks and the rich. He would rather save the bankers than the miners."

Her grown children "can't even think about getting their own apartments or starting families" due to the miserable economy.

Alejandro Casal, 28, an Airbus factory worker walking with fellow union members, said of the miners: "This isn't only their struggle. It's a struggle for the working class."

"The people need to be here on the street to say 'enough is enough,'" he said.

Daniel Woolls contributed to this report from Madrid.