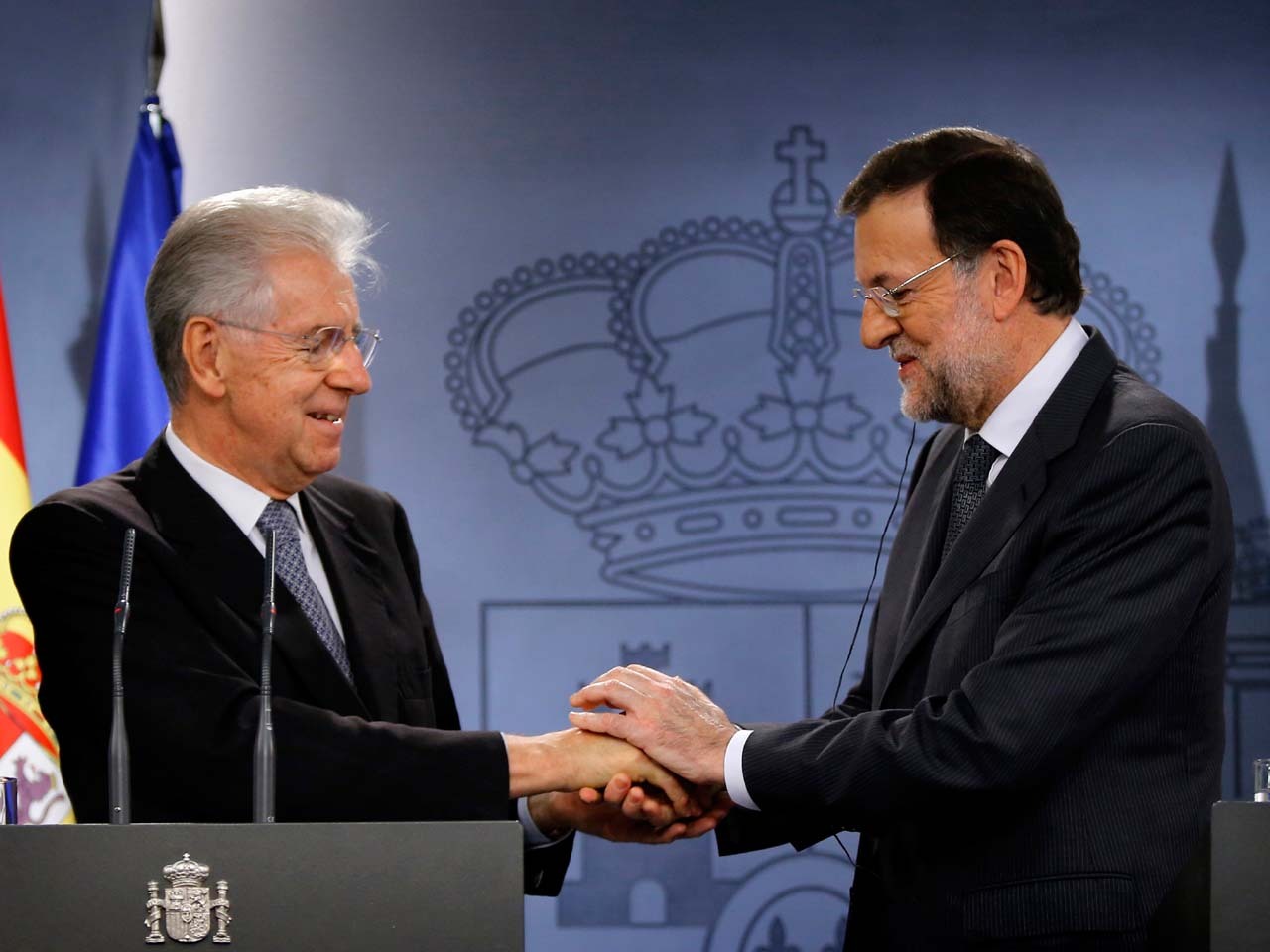 MADRID Spain has no immediate need to ask for outside aid to help deal with its debts, Prime Minister Mariano Rajoy insisted Monday.

Spain, which is in recession for the second time in three years and struggling with an unemployment rate of 25 percent, has been under pressure to tap a bond-buying program of the European Central Bank since it was announced in early September.

Under the plan, the ECB would buy a government's bonds, which has the impact of lowering that country's borrowing rates in the bond markets. The country would first have to apply for financial aid from Europe's bailout fund.

Since the plan was unveiled, Spain's government borrowing rates have dropped sharply as investors expected the country would soon tap the aid program. Paradoxically, the drop in borrowing rates as taken the pressure off the Spanish government to request the help.

"It's not essential at this moment," Rajoy said at a press conference with Italian counterpart Mario Monti. "I will do it when I think it is in Spain's best interests."

The interest rate for Spain's benchmark 10-year bond has eased to around 5.5 percent from 7 percent before the ECB announced its plan. On Monday, it was up a little at 5.65 percent.

Spain has been demanding to know the conditions the ECB would set if it were to formally apply for help. The government recently introduced more austerity measures and reforms, possibly to preempt the policy demands in the event of a request for ECB help.

Both Rajoy and Monti agreed that the ECB offer has been a positive development and reiterated their support for greater monetary and banking unity among the 17 countries that use the euro.

The Italian premier was in Madrid as part of a summit which has brought together ministers and business representatives from both countries.

Though Italy's debt mountain is bigger than Spain's and the country is also in recession, Monti's government has not felt the same sort of pressure in financial markets. That's because Spain's debt load, while lower than Italy's, is increasing at a faster rate.

As the eurozone's third and fourth largest economies, Italy and Spain are considered too expensive to rescue should they lose access to bond markets.

Separately, Spanish authorities presented more details on the so-called "bad bank," an organization that will soak up the soured investments weighing on the balance sheets of banks that have received rescue loans.

Spanish banks are sitting on some 180 billion euro in losses from the 2008 collapse of the real estate sector. The government hopes the banks will be able to focus on lending again to households and businesses once they flush those bad investments out.

When it becomes operational in mid-November, the bad bank will offer to buy banks' assets -- such as houses and land that have gone unsold -- at an average discount of 63.1 percent of their gross value, said Fernando Restoy, vice governor of the Bank of Spain.

It will take over banks' soured loans, such as nonperforming mortgage loans, at an average discount of 45.6 percent.

Restoy estimated the bad bank would spend some 45 billion euro ($58 billion) by the end of December buying assets from four banks that have received government aid. Two thirds of those assets are land, equivalent to 13 million square meters (3,212 acres). The remaining third consists of 89,000 homes.

He said the bad bank will likely work for no more than 15 years, during which time it hopes to achieve a return of between 14 percent and 15 percent on the assets it buys.