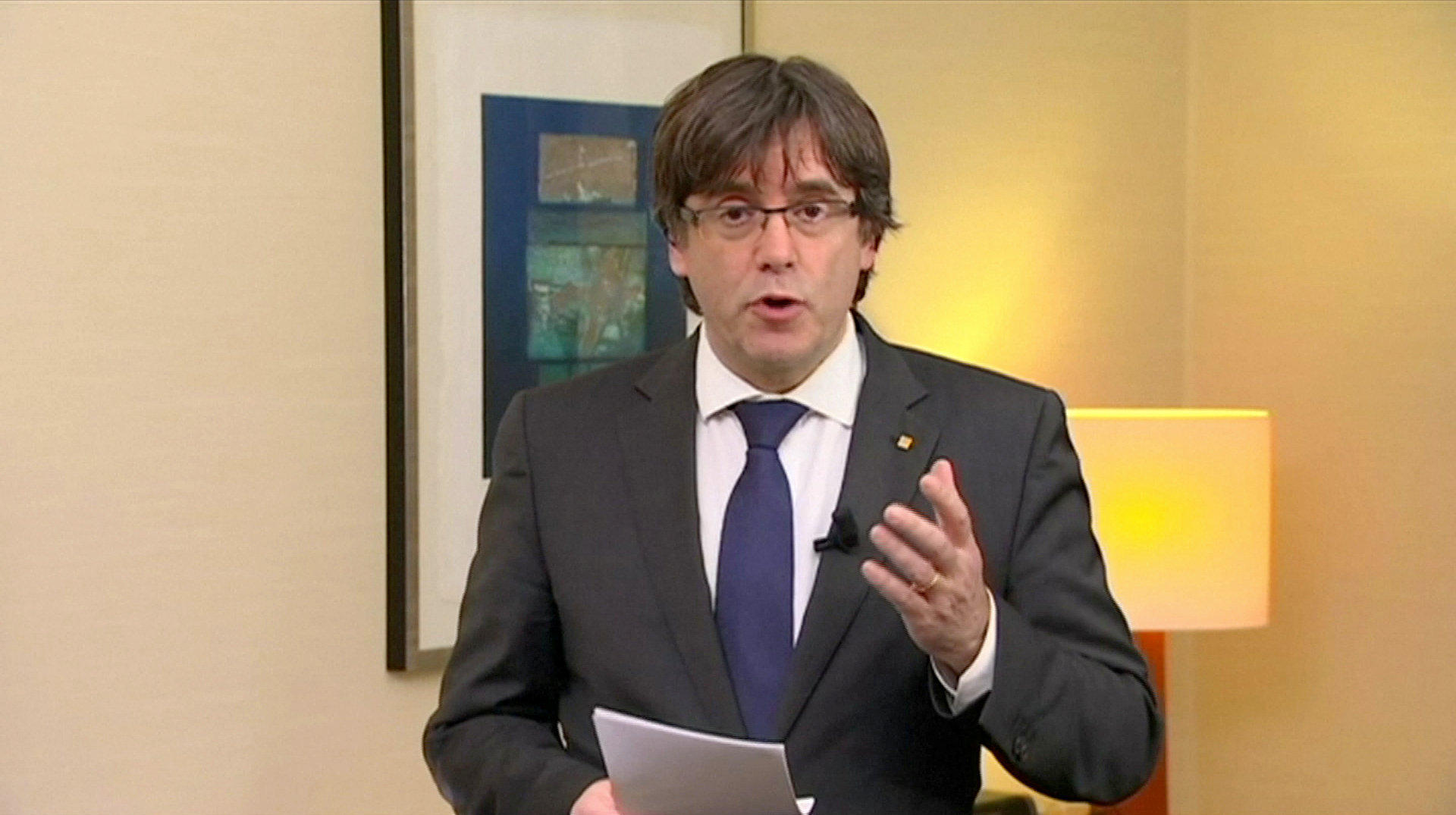 BRUSSELS -- The ousted leader of Catalonia remained the subject of a European arrest warrant Saturday as questions mounted over how long he would elude the Spanish justice system by staying undercover in Belgium and delaying extradition.

Former Catalan President Carles Puigdemont and several members of his separatist government fled north to Brussels after Spanish authorities removed the region's top officials from office a week ago. It is thought that Puigdemont and four others still are in Belgium, but sources close to them would not reveal their whereabouts.

Puigdemont wrote in Dutch on his Twitter account Saturday that he would "cooperate" with Belgian authorities, although his lawyer has said the pro-independence politician would fight a forced return to Spain. Puigdemont has said he will not return to Spain unless he receives guarantees of a fair trial, BBC News reports.

"We are prepared to fully cooperate with Belgian justice following the European arrest warrant issued by Spain," Puigdemont wrote in Dutch on his Twitter account.

Prosecutors in Belgium's capital, Brussels, said they were examining the arrest warrants for Puigdemont and four of his associates Saturday and hope to launch extradition proceedings as soon as possible.

Federal prosecutors in Belgium shared the warrants with their city counterparts due to links the five politicians from Catalonia have to Brussels, a statement from the Brussels prosecutors' office said.

The statement did not explain what those links are. Puigdemont spoke at a news conference in Brussels on Tuesday and appeared on Belgian state television on Friday.

Besides the Dutch tweet he posted on Saturday, Puigdemont also sent a Twitter message written in Catalan to political followers in northeastern Spain. He weighed in on a debate among secessionists in Catalonia regarding strategy for the December snap election Spain's government has called as part of its temporary takeover of the restive region.

"It's the moment for all democrats to unite. For Catalonia, for the freedom of political prisoners and the Republic," Puigdemont wrote, endorsing calls for pro-secession political parties to unite in a coalition for the upcoming election.

Spanish government spokesman Inigo Mendez de Vigo said Friday that politicians, even those who are jailed on suspicion of a crime, can run in the upcoming election unless they are convicted before it takes place. Puigdemont has left the door open to running.

Back in Barcelona, the government seat of Catalonia, pro-union parties criticized Puigdemont for his flight to Europe's capital 1,066 kilometers (662 miles) away.

Albert Rivera, the leader of the liberal Citizens party, said that Puigdemont had gotten what he asked for when he pushed ahead with plans for secession despite warnings from Spanish authorities that he was breaking the law.

"Mr. Puigdemont, wherever you are, come back to Spain and show your face before the law," Rivera said. "When you once bragged about flouting the law, you cannot now be indignant when a judge opens an investigation into your acts."

Miquel Iceta, leader of Catalonia's Socialists, said at a separate rally: "We have members of the government in prison, and others in Brussels trying to avoid the law. This is time to build bridges, not raise frontiers."

Puigdemont and the four former ministers are being sought for five crimes, including rebellion, sedition and embezzlement, for their roles in pushing regional lawmakers to declare independence from Spain.

But the longer Puigdemont can delay his arrest and extradition, the greater chance he would have of being a factor in the Dec. 21 election.

Legal experts have told The Associated Press that the process of getting another country's suspect turned over to face charges - from arrest to extradition, including appeals - could take about two months in Belgium.

Belgian Justice Minister Koen Geens said his government will have no influence over the future of Puigdemont or the other Catalan officials because the European arrest warrant "is a completely legal procedure."

He said, unlike a normal international extradition, "the executive power does not play any role in the EAW procedure. Everything goes through direct contact between the justice authorities."

Puigdemont's Belgian lawyer did not answer calls requesting comment on the arrest warrant but has said his client would fight extradition to Spain without requesting political asylum. Belgian federal prosecutors said they could question Puigdemont in coming days.

"We will study it, and put it in the hands of an investigating judge," prosecutors' spokesman Eric Van Der Sijpt told The Associated Press. "That could be tomorrow, the day after or even Monday ... we are not in any hurry."

In all, Spanish prosecutors are investigating 20 regional politicians for rebellion and other crimes that could be punishable by up to 30 years in prison.

While Puigdemont and his four aides hid in Belgium, nine members of his deposed government complied with a summons to appear in a Madrid court. National Court judge Carmen Lamela jailed them all, although agreed to let one former regional minister go free on bail.

On the other side of the political divide over Catalonia, a senior official of a large separatist party, the Republican Left, conditioned her party's participation in the Dec. 21 elections on the release of all the jailed separatists.

One of them, Republican Left's president, Oriol Junqueras, is the region's former vice president.

"If (Spain) wants democratic elections, if it wants to show that it is really democratic, it is necessary that it releases the main leaders of one of the options that will run for elections," Republic Left general secretary Marta Rovira said.

Rovira appeared to issue a veiled threat that, saying that if her party's demands were not met, separatists could try to scuttle the elections by encouraging pro-independence local officials to not manage the election or open their town halls as polling places.

"Elections here can only happen here if we say they do," Rovira said.

Fueled by questions of cultural identity and economic malaise, secessionist sentiment has skyrocketed to reach roughly half of the 7.5 million residents of Catalonia, a prosperous region that is proud of its Catalan language spoken along with Spanish.

The separatist majority of Catalonia's Parliament voted in favor of a declaration of independence on Oct. 27. The next day, Spain's central government used extraordinary constitutional powers to fire Catalonia's government and dissolve its regional parliament.

Spain's Constitution says the nation is "indivisible" and that all matters of national sovereignty must be handled by the Spanish Parliament.

In the Basque city of Bilbao in northern Spain, several thousand people marched Saturday despite the rain to protest the intervention of the Spanish government in Catalonia's self-rule. The Basque Country region has its own separatist movement.

More rallies in support of secession are planned for the coming days in Catalonia.