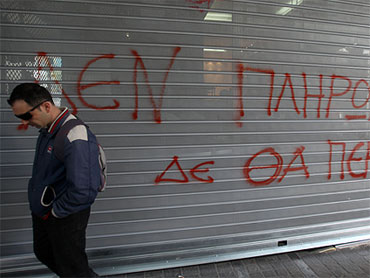 Europe's debt crisis flared again Wednesday as Spain saw its credit rating lowered, just as Germany sought to reassure markets fearful over a possible Greek financial collapse by saying its share of a key aid package could be approved in the next few days.

Stock and bond markets had begun to regain their composure caused by stinging downgrades of Greece and Portugal the day before when the Standard & Poors ratings agency delivered more bad news by cutting Spain's rating to AA from AA+.

The agency said Spain's growth prospects were weak after the collapse of a credit-fuelled housing and construction bubble. The downgrade raises the ominous prospect of market contagion hitting another countrys' finances.

Spain's economy is much larger than that of Greece or Portugal and many think it's simply too big to bail out if it gets into serious trouble, as Greece has, by facing unsustainable costs to borrow money on bond markets.

"We now believe that the Spanish economy's shift away from credit-fuelled economic growth is likely to result in a more protracted period of sluggish activity than we previously assumed," Standard & Poor's credit analyst Marko Mrsnik said.

The announcement came after a day of market drops and turmoil following the downgrades of Greece — to junk status — and Portugal. Markets had been looking for a clear word from Germany that it would contribute its part of a Greek bailout package.

Greece has said it can't pay debts coming due May 19 without euro45 billion ($59.8 billion) in bailout loans from the countries that use the euro as well as the International Monetary Fund, raising worries that the country is on the verge of financial collapse. But Germany, which would be the biggest single contributor with some euro8.4 billion, has insisted that Greece agree to a lasting austerity plan before it will approve its share of support.

Finance Minister Wolfgang Schaeuble said Wednesday that Germany could have its contribution to a Greek bailout package approved by parliament by the end of next week — the first solid timeline from Berlin aimed at easing the uncertainty that Greece might not get the money in time.

Schaeuble said that Germany was sticking to its insistence that Greece commit to new austerity measures in talks with the International Monetary Fund and the European Union, but that those could be concluded by this weekend.

If so, he said Germany's support measures could be brought to lawmakers Monday and fast-tracked to be approved by May 7, next Friday.

"The stability of the euro is at stake. And we're determined to defend this stability as a whole," Schaeuble said following talks with IMF chief Dominique Strauss-Kahn and European Central Bank President Jean-Claude Trichet.

Strauss-Kahn and Trichet both stressed necessity for a speedy passage of the aid package for Greece.

"The faster, the better. Every day that is lost, the situation is getting worse," Strauss-Kahn said.

Trichet and Strauss-Kahn both said negotiations with the Greek government should be concluded by this weekend."I'm confident," Trichet said.

German Chancellor Angela Merkel said later that as soon as Greece wraps up negotiations, then Germany can go ahead with its approval of financial help.

Strauss-Kahn sought to allay fears that the money would never be seen again, telling reporters that "there is no program from the IMF that hasn't been repaid."

"It is not helping for nothing, it is a loan that will be repaid," he said before sitting down for talks with Merkel. "That is why this program has to be credible."

In his earlier comments, Strauss-Kahn would not confirm reports that he had told German lawmakers Greece may need between euro100 and euro120 billion over the next three years, saying he would not comment on any figures as long as negotiations in Athens are still under way.

Schaeuble also declined to comment on the reports. He said the euro zone countries had made the decision to assist Greece in the three coming years, but only agreed on an aid package fort the first year as of now.

Strauss-Kahn also made it clear that the austerity measures will be difficult for Greece.

"It will take time. I don't want to hide it behind a rosy picture. It's not easy. It's difficult," Strauss-Kahn said.

Speaking during a cabinet meeting Wednesday, Greek Prime Minister George Papandreou said that every EU member must "prevent the fire that intensified through the international crisis from spreading to the entire European and global economy."

Papandreou insisted Greece was determined to bring its economy into order.

"We will show that we do not run away. In difficult times we can perform — and we are performing — miracles," he said, adding that "our government is determined to correct a course that has been followed for decades in a very short time."

In the meantime, stocks sagged and markets sold off Greek bonds with a vengeance. Investors appeared to anticipate Athens would eventually have to default or restructure its debt payments at some point even if the bailout gets it past May 19, when it has debt coming due.

A key indicator of risk — the interest rate gap, or spread between Greek 10-year bonds and the benchmark German equivalent — narrowed Wednesday afternoon to 5.9 percentage points after hitting an astonishing 9.63 percentage points, a massive jump from around 6.4 percentage points on Tuesday. The bigger the spread, the greater the fear Greece will default.

Authorities in Athens halted short-selling of stocks for two months, helping the exchange finally climb after a five-day losing streak. The ban will remain in force until June 28.

In Lisbon, Portugal's Prime Minister Jose Socrates and the leader of the main opposition party agreed on measures to help steer the country out of a financial crisis that threatens to engulf the euro zone's poorest member. The pair held emergency talks Wednesday as the Lisbon stock market recorded steep losses for a second straight day.

Socrates said, after the meeting, that the government and opposition would work together.

"We are ready to do whatever it takes to meet our budget targets," he said.

Still, the specter of the contagion spreading was prevalent.

"There is a very serious risk of contagion, it's something like post-Lehman period. Everybody is panicking and there is a lot of fear in the market," Nicholas Skourias, chief investment officer at Pegasus Securities in Athens told AP Television News. He was referring to the 2008 collapse of U.S. investment bank Lehman Brothers, which sped up the world financial crisis.

"I think that today we will have a lot of pressure as well because there is this fear of contagion."