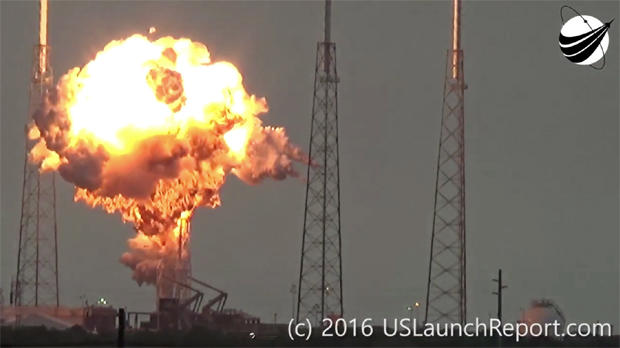 SpaceX engineers are reviewing some 3,000 channels of telemetry and video to determine what might have triggered the catastrophic explosion Thursday of a Falcon 9 rocket during fueling for a first-stage engine test firing before a planned launch Saturday to boost an Israeli communications satellite into orbit, the company said Friday.

The spectacular explosion, just eight minutes before the expected engine test, destroyed the $62 million rocket and its $195 million satellite payload and caused a yet-to-be-determined amount of damage to launch complex 40 at the Cape Canaveral Air Force Station.

In an update posted on the company’s website Friday, SpaceX said the company “has begun a careful and deliberate process of understanding the causes and fixes for (Thursday’s) incident. We will continue to provide regular updates on our progress and findings, to the fullest extent we can share publicly.”

SpaceX confirmed that engineers were counting down to a 9:15 a.m. EDT (GMT-4) ignition of the rocket’s nine Merlin 1D first stage engines when the anomaly occurred at 9:07 a.m. Video of the test showed the rocket suddenly erupting in a catastrophic fireball that appear to originate at the booster’s second stage.

“At the time of the loss, the launch vehicle was vertical and in the process of being fueled for the test,” SpaceX said. “At this time, the data indicates the anomaly originated around the upper stage liquid oxygen tank. Per standard operating procedure, all personnel were clear of the pad. There were no injuries.”

To identify the root cause of the mishap, SpaceX engineers followed an established contingency plan that called for preserving all possible evidence. It also called for “the assembly of an Accident Investigation Team, with oversight by the Federal Aviation Administration and participation by NASA, the United States Air Force and other industry experts.”

“We are currently in the early process of reviewing approximately 3,000 channels of telemetry and video data covering a time period of just 35-55 milliseconds,” the company said.

Launch complex 40, the company added, “clearly incurred damage, but the scope has yet to be fully determined. We will share more data as it becomes available.”

SpaceX leases two launch pads in Florida and one in California at the Vandenberg Air Force Base. Along with LC-40 at the Cape Canaveral Air Force Station, SpaceX also leases a retired space shuttle launch pad, complex 39A, at the nearby Kennedy Space Center that is expected to be operational in November.

The statement did not address possible repairs of the Air Force station pad. But it said the Vandenberg and Kennedy Space Center pads “are capable of supporting Falcon 9 and Falcon Heavy launches,” referring to the planned debut later this year of a heavy-lift version of the rocket. “We are confident the two launch pads can support our return to flight and fulfill our upcoming manifest needs.”

“Again, our number one priority is to safely and reliably return to flight for our customers, as well as to take all the necessary steps to ensure the highest possible levels of safety for future crewed missions with the Falcon 9,” the company said. “We will carefully and thoroughly investigate and address this issue.”

In the meantime, launches of a variety of satellites, including a NASA space station resupply mission scheduled for launch in November, remain on hold pending the results of the failure investigation.

“SpaceX’s business is robust, with approximately 70 missions on our manifest worth over $10 billion,” the company said. “In the aftermath of (Thursday’s) events, we are grateful for the continued support and unwavering confidence that our commercial customers as well as NASA and the United States Air Force have placed in us.”