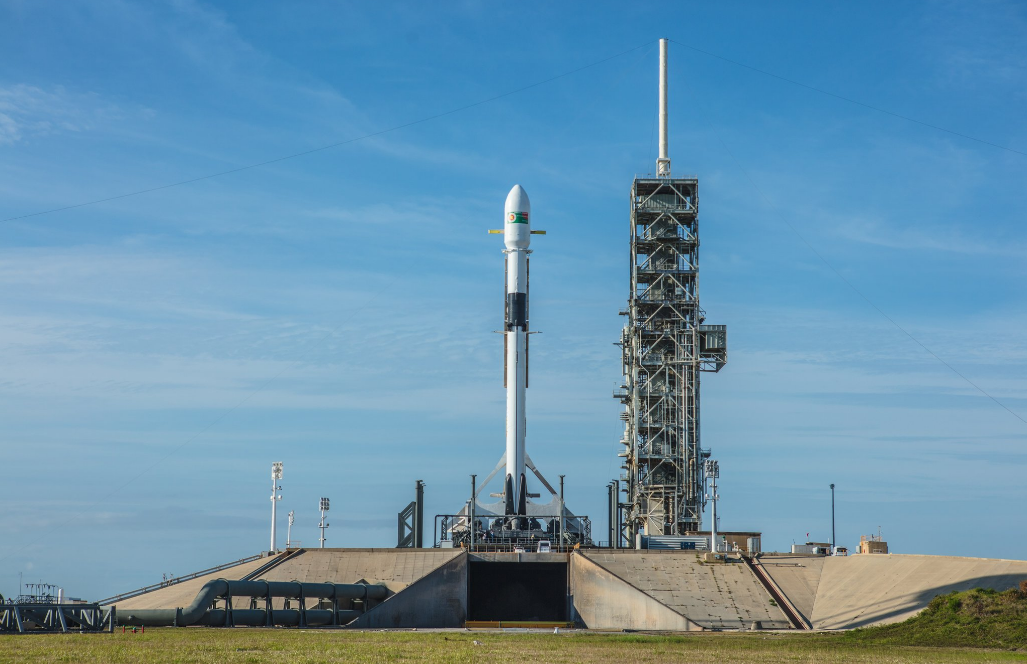 SpaceX tried to launch an upgraded version of its Falcon 9 rocket Thursday, the first of a new breed featuring more powerful engines and a host of other improvements designed to make the booster safer and easier to launch on multiple missions, but the countdown suddenly stopped with less than a minute to go and after a few more minutes of troubleshooting the flight was scrubbed for the day.

SpaceX provided no immediate word on what went wrong, but assuming the issue can be resolved in time the company will make a second attempt to launch the first "block 5" Falcon 9, carrying a communications satellite for Bangladesh, at 4:14 p.m. EDT Friday. Forecasters predicted a 60 percent chance of acceptable weather.

Along with helping SpaceX streamline launch operations, the block 5 booster eventually will be used to launch astronauts to the International Space Station as well as high-priority national security payloads for the Pentagon. The block 5 upgrades are designed to meet the stringent safety requirements for such missions.

Following a first stage engine test firing last week, the revamped booster's first flight is targeted for liftoff from historic pad 39A at the Kennedy Space Center at 5:47 p.m. EDT (GMT-4) Thursday, after slipping from the original time of 4:12 p.m. SpaceX did not provide any insight into what caused the initial slip or what stopped the countdown inside of one minute to launch.

Scrubs are not unusual with what amounts to a new rocket with engineers going to great lengths to make sure all systems are working properly before committing a vehicle and its payload to flight. But SpaceX seldom provides details.

The goal of the mission is to launch the Bangabandhu 1 communications satellite, built by Thales Alenia Space in France to provide Ku-band and C-band television and data services across Bangladesh. The satellite is the first communications station built for Bangladesh in a mission valued at some $280 million, including the cost of the Falcon 9.

As has become common for SpaceX, the Falcon 9's first stage will attempt to fly itself back to a landing on an offshore droneship after boosting Bangabandhu 1 out of the thick lower atmosphere. Going into this week's launch, SpaceX's landing record stood at 24 successful booster recoveries, 12 on land and 12 on droneships.

The block 5 Falcon 9 features a variety of upgrades to improve reliability and performance and to make it easier for SpaceX to refurbish the first stages for additional flights. SpaceX has re-launched 11 first stage boosters to date, but none have flown more than twice.

SpaceX founder Elon Musk told reporters in a Thursday conference call the block 5 version of the Falcon 9 will take reusability to new heights. Each block 5 rocket is designed to fly at least 10 times with no refurbishment at all between flights and even more missions with "moderate" servicing after 10 launchings.

"Our goal, just to give you a sense of how reusable we think the (block 5) design will be, we intend to demonstrate two orbital launches of the same flight vehicle within 24 hours no later than next year," Musk said. "That will be truly remarkable, to launch an orbit-class rocket twice in one day."

The block 5 is the last major iteration of the Falcon 9, and Musk said he expects some 300 flights, using 50 to 60 boosters, between now and when the rocket is retired in favor of SpaceX's gargantuan "BFR" rocket, a launch system he says will one day carry people to Mars.

But in the near term, the company's major goal is launching its customers' satellites while demonstrating the block 5's safety and reliability, proving to NASA and the Air Force that the upgraded Falcon 9 meets stringent government safety requirements that maximize the safety of astronauts and high-value national security payloads.

One of the most significant changes is the use of stronger high-pressure helium tanks, known as composite overwrapped pressure vessels, or COPVs, that are submerged in the rocket's liquid oxygen propellant tanks. The helium is used to pressurize the propellant tanks and provide the muscle needed for steering.

A second stage COPV apparently ruptured during a pre-launch test Sept. 1, 2016, triggering a catastrophic explosion that destroyed a Falcon 9 and its satellite payload and heavily damaged the launch complex. The new tanks are designed to eliminate that failure mode and are required for NASA's commercial crew program.

Other changes include improved heat shield insulation at the base of the rocket, a tougher "octaweb" first stage engine mounting framework, redesigned turbopump machinery to minimize or eliminate small cracks in critical components and improved insulation in other areas of the rocket.

Even the landing legs have been redesigned to allow engineers to retract them after touchdown. The legs had to be removed in previous versions of the rocket before a recovered booster could be hauled away for post-flight processing.

"Block 5 basically summarizes all that we learned on reusability," Hans Koenigsmann, a senior SpaceX manager, told reporters before a launch last month. "We tried to summarize all of these lessons learned into a booster that then is able to fly and be recovered and fly again multiple times without a lot of refurbishment. That's basically the key thing on block 5."