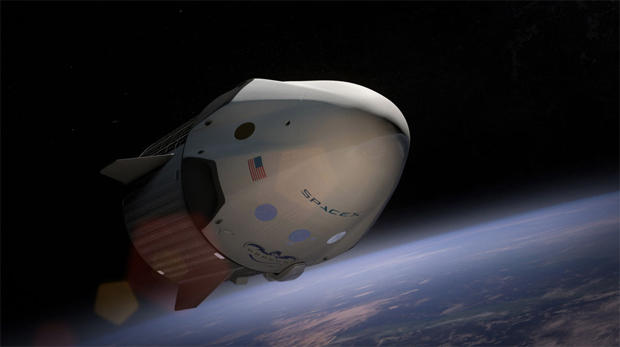 SpaceX plans to launch two private citizens on a flight around the moon next year, a bold mission that will be the first to carry humans beyond low-Earth orbit since the Apollo moon program, company founder Elon Musk said Monday.

Musk declined to say who had booked the flight, how much they were paying or even specify their gender. And he made it clear that if NASA wanted to send astronauts on such a trip, the space agency would have priority over any private citizens.

But the high-tech entrepreneur said he fully intends to launch the mission, and probably more like it, as part of his company’s long-range goal to send humans to Mars at some point in the future.

“We’ve been approached to do a crewed mission beyond the moon from some private individuals,” Musk said. “And they’re very serious about it. We plan to do that, probably in the fourth quarter of next year. That would be on a Dragon 2 spacecraft and a Falcon Heavy rocket, which is due to do its maiden launch this summer.”

SpaceX is developing the crewed Dragon 2 capsule under contract to NASA to fly agency astronauts to and from the International Space Station. Boeing has a similar contract to develop a similar ferry ship to support space station operations and help end NASA’s reliance on Russia’s Soyuz.

The first unpiloted test flight of a Dragon 2 spacecraft is targeted for late this year with the first crewed launch in the first half of 2018. The Government Accountability Office has cast doubts on those target dates, but SpaceX managers insist they can keep the program on track.

For the moon mission, SpaceX would launch a Dragon 2 atop a heavy-lift Falcon 9 rocket made up of three core stages strapped together generating 5 million pounds of liftoff thrust. First flight of a Falcon 9 Heavy is planned for later this summer. By the time the moon mission flies, Musk said, SpaceX will have tested the Falcon 9 Heavy as well as the Dragon 2.

The passengers on the lunar flight will be launched on a “free return” trajectory, shooting out past the moon and using lunar gravity to pull the spacecraft around for a high-speed return to Earth.

“This would be approximately a weeklong mission, and it would skim the surface of the moon, go quite a bit farther out into deep space and then loop back to Earth,” Musk said. “I’m guessing, probably distance wise, maybe 300,000 or 400,000 miles.”

As for the cost of the mission, Musk said his passengers expect to pay “maybe a little more than what the cost of a crewed mission to the space station would be.”

Depending on how one does the math under the company’s commercial crew contract with NASA and the number of expected flights by SpaceX and Boeing to and from the space station, that works out to around $58 million a ticket. How much SpaceX might actually charge for the moon mission is not yet known.

But Musk views the flight as more than a business opportunity. It’s in keeping with his long-range goal of sending humans to Mars. He already plans to send an unpiloted Dragon to a landing on Mars in the 2020 timeframe.

“As I think you guys know, the goal for SpaceX from its founding in 2002 has been to accelerate the advent of space exploration, ultimately with the idea of a self-sustaining civilization on Mars and making humanity multi-planetary,” he told reporters in an afternoon teleconference.

“So, a critical step along the way is getting to understand what it’s like to have people in deep space.”

He said the flight would be, perhaps, riskier than a typical space mission but he said the two passengers would be well trained for emergencies. The free-return trajectory will minimmize the need for critical rocket firings to keep the spacecraft on course, utilizing the same sort of gravity assist from the moon that helped the Apollo 13 crew make its way back toward Earth.

But that doesn’t mean it will be risk free. Far from it.

“There is some risk here, but they’re certainly not naive,” Musk said. “We’ll do everything we can to minimize that risk, but it’s not zero.”

In a posting on SpaceX’s website, the company said the passengers “already paid a significant deposit to do a moon mission.”

“Like the Apollo astronauts before them, these individuals will travel into space carrying the hopes and dreams of all humankind, driven by the universal human spirit of exploration,” the company said. “We expect to conduct health and fitness tests, as well as begin initial training later this year.”

The posting said “other flight teams” also have expressed interest in similar lunar swing bys “and we expect more to follow.”

SpaceX thanked NASA for the commercial crew contract that is financing development of the Dragon 2 spacecraft. The Falcon 9 Heavy, the most powerful rocket since NASA’s Saturn 5, is being developed by SpaceX with company funding.

“Once operational Crew Dragon missions are underway for NASA, SpaceX will launch the private mission on a journey to circumnavigate the moon and return to Earth,” the company said in its statement. “Lift-off will be from Kennedy Space Center’s historic Pad 39A near Cape Canaveral — the same launch pad used by the Apollo program for its lunar missions.

“This presents an opportunity for humans to return to deep space for the first time in 45 years and they will travel faster and further into the solar system than any before them.”