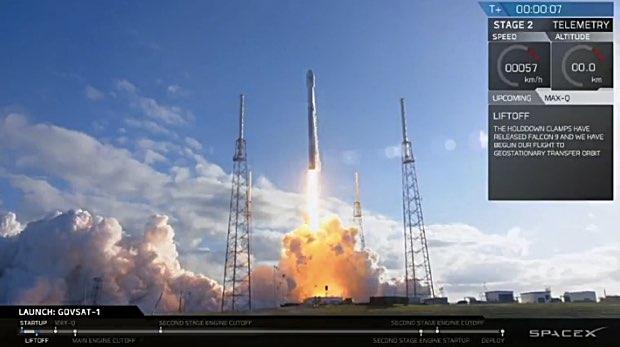 It was the California rocket builder's sixth flight featuring a "used" booster, a key element in founder Elon Musk's drive to lower costs. It was the 48th flight of a Falcon 9 overall and the second so far this year.

The flight came three weeks after SpaceX launched a mysterious satellite known as Zuma for the U.S. government, a mission that ended in failure when the payload crashed back into the atmosphere, sources said, shortly after launch. While SpaceX has never discussed the classified satellite, company officials said the Falcon 9 performed normally.

Wednesday's flight also appeared to go smoothly, with the 229-foot-tall rocket blasting off from pad 40 at the Cape Canaveral Air Force Station at 4:25 p.m. EST (GMT-5). A launch try Tuesday was called off to repair a component in the rocket's second stage, but there were no issues Wednesday and the booster quickly streaked away to the east over the Atlantic Ocean.

The flight came on the 60th anniversary of the launch of the Explorer 1 science satellite, the first successful orbital launch by the United States. The Falcon 9 was the 3,568th rocket to take off from the Air Force Eastern Range at Cape Canaveral over the past six decades.

Perched inside a protective nose cone was the GovSat 1 communications satellite, a joint venture between the government of Luxembourg and SES, a Luxembourg-based satellite operator. On hand for launch were Luxembourg's Grand Duke Guillaume and his wife the Grand Duchess Stephanie.

The first stage's nine Merlin 1D engines fired for two minutes and 38 seconds, boosting the rocket out of the thick lower atmosphere before shutting down. The stage then fell away and the single engine powering the Falcon 9's second stage took over to continue the climb to space.

Because the 9,325-pound GovSat 1 was bound for an initially elliptical orbit with a high point around 36,000 miles, it was believed the first stage did not have enough left-over propellant to attempt a normal landing back at Cape Canaveral or on an off-shore droneship.

But the stage executed a test entry and descent, firing its braking rockets in a high-thrust maneuver before deploying its landing legs and settling to a "touchdown" in the ocean. Remarkably, the booster survived its watery impact. SpaceX released a photograph showing it resting on its side, apparently intact, with a landing leg extended toward the sky.

It was only the fifth time in the last 20 flights that SpaceX did not attempt a first stage recovery.

The second stage completed the first of two planned rocket firings eight-and-a-half minutes after liftoff. A second firing 18 minutes later put the spacecraft into the desired elliptical orbit and GovSat 1 was released to fly on its own about a half-hour after launch.

Over the next few weeks, on-board thrusters will be used to circularize the orbit at an altitude of 22,300 miles above the equator where objects take 24 hours to complete one trip around the planet and thus appear stationary in the sky.

GovSat 1 is the centerpiece of a unique public-private venture Luxembourg and SES. Built by Orbital ATK, GovSat 1 will provide jam-resistant, encrypted military and government communications across Europe, the Mediterranean, the Middle East and Africa for Luxembourg, NATO and allied nations, including the United States.

"The launch of the GovSat 1 satellite is certainly the most exciting moment in our young company's history, the company being founded back in 2015," Patrick Biewer, GovSat's CEO, told reporters Tuesday. "We intend to pioneer a new approach to what's known as secure communications services, and we want to provide this to governments and institutions for defense and civilian use.

"The novelty of the GovSat approach is to develop the same satellite supply for dual use, civilian and security applications. This enables secure communications to users that, so far, did not have the privilege to benefit from the access to advanced security satellite features."

Even though the satellite was developed as a public-private venture, GovSat 1 is "a pure defense payload in X-band and military Ka-band frequencies," Biewer said. "It's very important to note the access to those frequencies is only for governments and institutions, so a private commercial user cannot have access to the frequencies provided by this satellite."

With GovSat off the ground, SpaceX will shift its attention to readying the company's new Falcon Heavy rocket for a long-awaited maiden launch Feb. 6 from historic pad 39A at the nearby Kennedy Space Center.

Made up of three strapped-together Falcon 9 core stages topped by a single upper stage, the Falcon Heavy will generate more than 5 million pounds of thrust at liftoff from its 27 core-stage engines, making it the most powerful rocket in the world after NASA's space shuttle and the long-retired Saturn 5 used to launch Apollo spacecraft to the moon.

The payload for the Heavy's first flight is Musk's personal Tesla Roadster sports car, which the company plans to send off an a trajectory carrying it as far as the orbit of Mars, playing David Bowie's "Space Oddity" as it sails away into the void.

The goal is to verify the performance of the powerful new rocket, which has proved more difficult to build than originally believed. Putting the Tesla on board as a dummy payload is unusual but not surprising when it comes to Musk, who playfully posted a video of himself playing with a mini flamethrower on Instagram over the weekend.