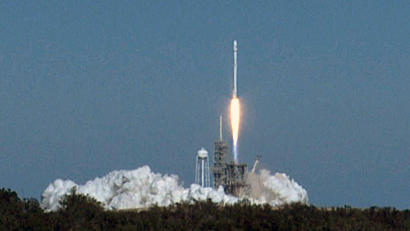 Keeping up a blistering launch pace, SpaceX fired off another Falcon 9 rocket Monday, boosting a powerful South Korean communications satellite into orbit in the rocket-builder's third flight this month and its 16th so far this year.

In an increasingly familiar sight, the rocket's first stage flew itself back to a pinpoint landing on the droneship "Of Course I Still Love You" stationed several hundred miles from Cape Canaveral, logging the company's 19th successful booster recovery in 24 attempts.

A few seconds before the booster stage touched down, the Falcon 9's second stage completed the first of two planned burns, putting the 4.1-ton Koreasat-5A communications station into the planned preliminary orbit. A second engine firing a few minutes later completed the launch phase of the mission.

Koreasat-5A's on-board thrusters will be used over the next few weeks to circularize the orbit at its operational altitude of 22,300 miles above the equator where spacecraft take 24 hours to complete one orbit and thus appear stationary in the sky -- a key requirement for communications satellites.

Built by Thales Alenia Space, Koreasat-5A is owned by Seoul-based KT SAT. It is intended to replace Koreasat-5, launched in 2006, to provide high-speed Ku-band television and data across Asia and the Middle East along with maritime coverage over the Persian Gulf, the Indian Ocean and the China Sea.

The latest mission got underway at 3:34 p.m. EDT (GMT-4) when the Falcon 9's nine Merlin 1D engines ignited and spun up to full throttle. After computer checks to make sure all nine powerplants were operating normally, the 129-foot-tall rocket was released from the pad to kick off the climb to space.

Generating 1.7 million pounds of thrust, the first stage put on a dramatic afternoon show as it streaked through a cloudless blue sky, arcing away to the east as it accelerated out of the dense lower atmosphere.

The first stage engines shut down two-and-a-half minutes later. The stage fell away and the single engine powering the second stage flashed to life to continue the boost to orbit.

Because the satellite was bound for a high-altitude transfer orbit, the first stage did not have enough left-over propellant to make it back to a landing at the Cape Canaveral Air Force Station.

Instead, the rocket's on-board computer set its sights on the "Of Course I Still Love You" drone ship, re-starting three engines four minutes after separation to slow down for atmospheric entry.

Dropping tail first and using titanium "grid fins" at the top of the booster to maintain the proper orientation, the computer restarted a single engine as the rocket neared the drone ship, four landing legs deployed and the vehicle settled to touchdown on the landing craft's deck.

SpaceX's landing record now stands at 19 successes in 24 attempts, 12 on droneships and 7 at the Cape Canaveral Air Force Station.

The company plans at least three more launches this year, including a secret, presumably military mission next month, launch of a space station resupply mission in early December and the maiden flight of the Falcon Heavy before the end of the year. The powerful Falcon Heavy is made up of three Falcon 9 core stages strapped together and a standard second stage.

SpaceX launches its rockets from the Kennedy Space Center, the Cape Canaveral Air Force Station and Vandenberg Air Force Base, Calif., and is building a commercial launch complex in south Texas.

Launch complex 40 at the Cape Canaveral Air Force Station was heavily damaged when a Falcon 9 exploded on the pad Sept. 1, 2016, forcing SpaceX to rely on pad 39A at the nearby Kennedy Space Center for all the company's east coast flights.

Repairs to complex 40 are nearing completion, and SpaceX plans to resume flights from the Air Force station with the space station resupply flight.