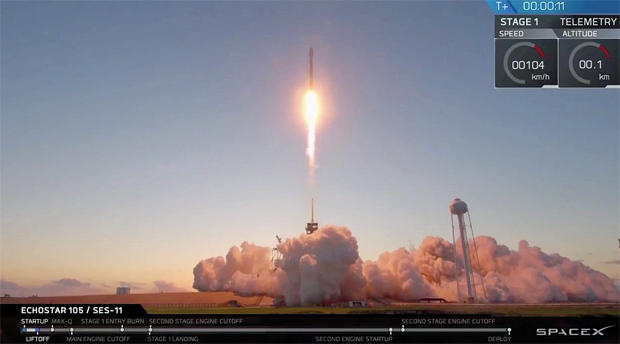 A SpaceX Falcon 9 rocket carrying a commercial communications satellite thundered into space Wednesday after a picture-perfect sunset launching from the Kennedy Space Center, the California rocket builder's second flight in just three days and its 15th so far this year.

The rocket's previously flown first stage, meanwhile, flipped around and plunged back to Earth, settling to a pinpoint landing on the droneship "Of Course I Still Love You" stationed several hundred miles from Cape Canaveral. Despite a rough sea, it was SpaceX's 18th successful booster recovery in 23 attempts, the company's 14th success in a row.

But the primary goal of the flight was to put a satellite jointly operated by SES and EchoStar into the proper preliminary orbit, and the Falcon 9's second stage did just that about a minute after the first stage landed. A short second burn by the upper stage put the satellite in the required elliptical orbit.

The SES-11/EchoStar 105 satellite will use on-board thrusters to finish the job, putting the spacecraft in a circular orbit 22,300 miles above the equator where satellites take 24 hours to complete one trip around the planet and thus appear to hang stationary in the sky.

SES-11/EchoStar 105, a Eurostar 3000 satellite built by Airbus Defence and Space, will be positioned above the equator at 105 degrees west longitude.

Luxembourg-based SES owns 24 C-band transponders aboard the satellite to provide television service across North America. EchoStar will use 24 Ku-Band transponders to provide service to the U.S. government and commercial users across the continental United States, the Gulf of Mexico and the Caribbean.

"From our point-of-view, it's basically for the U.S. video neighborhood, and specifically for the delivery of HD and Ultra HD," Martin Halliwell, chief technology officer at SES, told Spaceflight Now a few hours before launch.

"We're looking at about 100 million TV homes over the United States. ... We're trying to utilize this for the development of Ultra HD, trying to encourage the usage and distribution of that. We're covering the whole of (continental United States), plus Hawaii, Mexico and Caribbean as well, so it has very good coverage."

The launching capped a busy week for SpaceX, which boosted 10 Iridium NEXT satellite telephone relay stations into orbit early Monday after a flawless liftoff from Vandenberg Air Force Base, California. Wednesday's launch marked the second time this year SpaceX has fired off two Falcon 9s within three days of each other.

It also marked the third time SpaceX has launched a previously flown first stage and the second such flight for SES, the first company to take advantage of a "used" rocket last March. The SES/EchoStar booster first flew last February, helping boost a Dragon space station supply ship into orbit.

Recovering, refurbishing and re-launching rocket stages is a key element in SpaceX founder Elon Musk's goal of sharply reducing launch costs. Halliwell's not so sure about the savings. He said it's more a question of having the hardware available to maintain a steady launch pace, minimizing the cost impact of launch delays.

"I honestly believe that in 24 months, there won't be any discussion of whether it's a pre-flown booster or not," he said. "There will probably be a mixture of pre-flown components and new components. You're just going to buy a service. I think this idea of the fact that it's second-hand, there should be a big discount, is going to disappear completely."

He said the SES-11/EchoStar 105 satellite was a year late getting to the launch pad because of a variety of issues, including a SpaceX on-pad explosion last year that disrupted the schedule.

But with routine rocket recoveries, and with launch pads in Florida, California and, in the near future, Texas, Halliwell said SpaceX should be able to maintain a high flight rate, minimizing delays and, in the process, lowering costs to satellite operators.

"I think in the long term, they've got so much hardware which is coming back, it has to help," Halliwell said. "It has to make the cadence improve, and the fact they've got two, and maybe in the future four (launch pads). Wow, that should be good. It gives us a better chance to get into space on time."

Wednesday's flight got underway at 6:53 p.m. EDT (GMT-4) when the Falcon 9's nine Merlin 1D engines ignited and throttled up to full thrust. After quick computer checks to verify good performance, the slender rocket was released from the pad to kick off an eight-minute 33-second climb to orbit.

The first stage appeared to perform flawlessly, generating 1.7 million pounds of thrust as it knifed through the thick lower atmosphere, quickly accelerating as it consumed its load of super-cooled liquid oxygen and kerosene propellants.

Two-and-a-half minutes later, the engines shut down, the stage fell away and the single engine powering the rocket's second stage ignited to continue the climb to space.

The first stage, meanwhile, flipped around and restarted three engines to rapidly slow and begin its descent to landing. The three engines re-started to reduce the stress of atmospheric entry, using computer-controlled "grid fins" near the top of the booster to maintain the proper orientation.

Finally, dropping tail-first, a single engine ignited, four landing legs deployed and the stage set down on the deck of the "Of Course I Still Love You" droneship stationed in the Atlantic Ocean a few hundred miles east of Cape Canaveral.

Successfully demonstrating that rocket stages can be reflown "means you can fly and re-fly an orbit-class booster, which is the most expensive part of the rocket," Musk said during the first flight of a previously flown booster earlier this year. "This is going to be ... a huge evolution in spaceflight."

SpaceX's landing record now stands at 18 successes in 23 attempts, 11 on droneships and seven at the Cape Canaveral Air Force Station. It was the third successful recovery of a previously flown first stage.

The company plans some 20 launches this year, including the maiden flight of the Falcon Heavy, a rocket made up of three Falcon 9 core stages strapped together and a standard second stage. The new rocket is expected to make its debut before the end of the year.