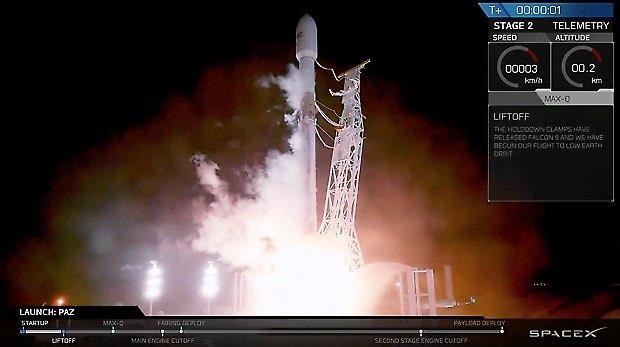 Just two weeks after launching a Tesla Roadster into space in the maiden flight of the Falcon Heavy rocket, SpaceX got back to business Thursday, launching a Falcon 9 carrying a $200 million Spanish radar imaging satellite and two experimental internet relay stations, pathfinders for SpaceX's proposed mega-network of orbital broadband beacons.

Running a day late because of high upper level winds, the 229-foot-tall rocket blasted off from Vandenberg Air Force Base, Calif., at 9:17 a.m. EST, streaking away to the south over the Pacific Ocean as it climbed toward an orbit around Earth's poles.

The rocket's first stage -- the ninth previously flown SpaceX booster to make a second flight -- powered the vehicle out of the thick lower atmosphere and then fell away two-and-a-half minutes after liftoff. No attempt was made to recover the used rocket, which fell back to Earth and crashed into the Pacific.

The company did, however, attempt to recover at least one of the nose cone panels that protected the satellite payload during the early moments of the flight. SpaceX has designed wing-like parafoils to guide the panels down to capture in a large net on a custom-designed ship -- Mr. Steven -- stationed down range from the launch site.

SpaceX founder Elon Musk confirmed parafoil deploy, but the descending nose cone panel did not make it to the capture net.

"Missed by a few hundred meters, but fairing landed intact in water," Musk tweeted. "Should be able catch it with slightly bigger chutes to slow down descent."

The company hopes to perfect the technology to routinely recover the $6 million components for refurbishment and reuse.

Using a sophisticated radar imaging system that can "see" Earth's surface through clouds, day or night, PAZ is designed to capture images showing features as small as 9.8 inches across, covering an area of nearly 116,000 square miles every day. The imagery will be provided to the Spanish government and its allies as well as commercial users.

"It's a very flexible mission," Miguel Angel García Primo, chief operating officer of Hisdesat, told Spaceflight Now. "It's useful for a lot of applications, environmental, also for big infrastructure tracking and planning, maritime surveillance and government applications like monitoring and surveillance for any specific items that you'd like to follow."

PAZ will work in concert with two other synthetic aperture radar satellites already in orbit, TerraSAR-X and TanDEM-X, to provide very high resolution imagery and to shorten the time between overflights of high-priority targets.

While PAZ was the primary payload for Thursday's launch, much of the attention on the flight went to the secondary payloads, two SpaceX-developed orbital broadband prototypes known as Microsat-2a and Microsat-2b.

SpaceX did not mention the satellites in its press kit, but the company said in a Feb. 1 letter to the Federal Communications Commission that the 880-pound relay stations would be aboard. And on Wednesday, SpaceX founder Elon Musk tweeted the Falcon 9 "carries 2 SpaceX test satellites for global broadband. If successful, Starlink constellation will serve least served."

In an FCC application last year, SpaceX proposed a vast network -- Starlink -- of up to 4,425 small satellites, orbiting at altitudes between 689 and 823 miles, broadcasting internet content in high-speed Ku- and Ka-band frequencies. The company also has proposed launching more than 7,500 satellites in lower 210-mile-high orbits using different frequencies.

"These (satellites) are meant to gather data in advance of deploying and operating a satellite constellation that will provide Internet service," Tom Praderio, a SpaceX firmware engineer, said during the company's launch webcast.

"However, even if these satellites work as planned, we still have considerable technical work ahead of us to design and deploy a low Earth orbit satellite constellation," he said. "This system, if successful, would provide people in low to moderate population densities around the world with affordable high-speed Internet access, including many that have never had Internet access before."

The two microsats on board Thursday were released in the same orbit as PAZ. After checkout, both were to be maneuvered into 700-mile-high orbits. The satellites are equipped with phased array antennas and optical links for communications between spacecraft.

Nicknamed Tintin A and B, both spacecraft were communicating with ground stations and appeared to be healthy. Musk said in a tweet the satellites "will attempt to beam 'hello world' in about 22 hours when they pass near LA. Don't tell anyone, but the wifi password is 'martians.'"

"Satellite technology can help reach Americans who live in rural or hard-to-serve places where fiber optic cables and cell towers do not reach," Pai said in a statement. "And it can offer more competition where terrestrial Internet access is already available.

"I have asked my colleagues to join me in supporting this application and moving to unleash the power of satellite constellations to provide high-speed Internet to rural Americans. If adopted, it would be the first approval given to an American-based company to provide broadband services using a new generation of low-Earth orbit satellite technologies."

SpaceX faces stiff competition from OneWeb, a company that plans to launch more than 800 330-pound satellites. They will be built on a production line in an $85 million 100,000-square-foot factory near the Kennedy Space Center. OneWeb plans to launch its first spacecraft later this year from French Guiana atop a Soyuz rocket.

The FCC already approved OneWeb's proposal as well as another for a network being developed in Canada by Telesat.