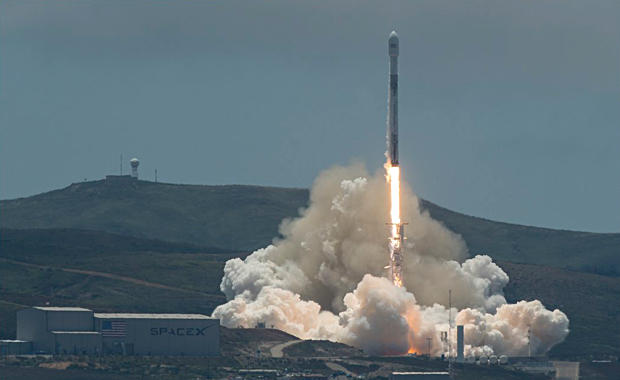 A SpaceX Falcon 9 rocket climbed away from California Tuesday carrying seven satellites intended to replace earlier spacecraft, five Iridium NEXT telephone relay stations and two for NASA and a German research agency that will fly in tandem using ultra-precise gravity readings to measure how water is distributed around the world.

The launching, the 56th in the Falcon 9 family and SpaceX's 10th so far this year, came on time at 12:47 p.m. PDT (GMT-7; 3:47 p.m. EDT) from pad 4-East at Vandenberg Air Force Base northwest of Los Angeles. As usual, the rocket put on a spectacular show as it climbed away from its oceanside firing stand atop a brilliant jet of flaming exhaust, accelerating away to the south toward a polar orbit.

The rocket's first stage was used in January to help launch a classified satellite known as ZUMA that is believed to have plunged back into the atmosphere after its user-provided attachment mechanism failed to release the spacecraft from the Falcon 9's second stage.

The Falcon 9, as it turned out, was blameless, but the previously flown first stage used for Tuesday's launch will not be making a third flight. It was an older model, and SpaceX made no attempt to bring it safely back to Earth. After boosting the vehicle out of the dense lower atmosphere, it fell away to crash into the Pacific Ocean.

The second stage continued the climb to space and the two Gravity Recovery and Climate Experiment Follow-On -- GRACE-FO -- satellites were released from the Falcon 9's second stage about 11-and-a-half minutes after takeoff. The five Iridium NEXT satellites followed suit about an hour later, after an orbit-raising maneuver by the second stage.

As the name indicates, the GRACE-FO satellites are replacements for an earlier pair that spent 15 years monitoring how water is distributed globally, measuring changes in Earth's oceans, glaciers and ice sheets while tracking sub-surface aquifers and soil moisture.

The original GRACE mission found that Greenland, for example, is losing 281 billion tons of ice per year on average while Antarctica is losing another 125 "gigatons" annually. One gigaton is the mass of water in 400,000 Olympic-size swimming pools.

"GRACE was really a revolutionary mission for us understanding the water cycle and how the climate behaves and the trends that are taking place," said Frank Webb, GRACE-FO project scientist at NASA's Jet Propulsion Laboratory.

The two GRACE-FO satellites, each about the size of a sports car, were designed to fly in tandem 137 miles apart in a 305-mile orbit around Earth's poles. Using a microwave tracking system, the distance between the two 1,300-pound satellites can be measured to within the diameter of a red blood cell.

The gravity produced by the Earth's mass includes a component contributed by water, whether solid, liquid or vapor, visible or not. As the GRACE-FO satellites fly along, their positions will be affected ever so slightly by subtle changes in gravity caused by the changing mass below.

By precisely measuring the distance between the satellites, scientists can determine how much mass is below the flight path and then calculate the contribution of water, creating global maps every 30 days.

"If mass changes on the ground, like in aquifers or melting glaciers or in the oceans and so on, we see it immediately in a range change, which we measure very, very precisely by a microwave tracking system with a precision of about one micrometer," said Frank Flechtner, GRACE-FO project manager at the German Research Centre for Geosciences, or GFZ.

"That's about a tenth (of the width of) a human hair over the distance between Los Angeles and San Diego."

The two GRACE FO satellites also will test new laser ranging technology that should greatly improve the accuracy of readings from future spacecraft. NASA's contribution to the current program was $430 million while the GFZ spent $90.9 million on instrument development.

The five Iridium NEXT satellites on board the Falcon 9 will boost the satellite telephone operator's fleet of upgraded relay stations to 55 following five earlier SpaceX flights that launched 10 satellites at a time. Two more SpaceX flights are planned later this year.

Sixty-six of the 1,896-pound satellites operating in six orbital planes are required to complete the Iridium NEXT network, allowing users to make calls from anywhere in the world. The company plans to eventually launch 15 in-orbit spares, using SpaceX to put 75 of the 81 planned satellites into orbit. Two of the five satellites aboard for Tuesday's flight will serve as spares.

The new satellites are being phased in as quickly as possible, taking the place of older spacecraft that are being driven out of orbit. Of the 50 NEXT satellites launched prior to Tuesday's flight, 47 already were in service, working with 19 earlier "block 1" satellites.

While the new constellation is not yet complete, "our customers will be serviced by our NEXT satellites, on average, well over 80 percent of the time since we are biasing our NEXT satellite beams to carry more of the traffic, particularly in the Northern Hemisphere," said Iridium CEO Matt Desch.

"The NEXT satellites are faster, voice calls sound better, and we want our customers to get service through them as soon as possible."

The NEXT-series satellites also carry circuitry provided by Harris Corp. to track ships at sea on a minute-by-minute basis and another Harris-built device, provided by a multi-agency consortium known as Aireon, that eventually will track aircraft anywhere in the world.

And Iridium offers an "internet of things" service to relay data between connected devices anywhere in the world. Desch said the company now has more than a million customers, half of which utilize machine-to-machine communications.

Iridium is working to make sure all of its older block 1 satellites are safely deorbited to prevent any risk of a collision and the creation of space debris. Fifteen block 1s already have re-entered the atmosphere and another 10 are in the process.

Desch said he is concerned about plans to launch huge fleets of small satellites in the years to come to provide global internet access and other services.

"When companies plan to launch hundreds, if not thousands, of small satellites, we're concerned that these new operators may be incentivized to cut corners and take risks that speed up their deployment and lower their costs," he said. "Space is a shared resource, and if their new satellites are not robust enough or operate properly, they have the potential to add a lot of debris, putting us all at increased risk.

"Many of them will start launching later this year or next, and if they have a number of premature failures, they may not be incentivized to stop and figure out what is going wrong, given the lower cost of their satellites and the need to get a working system into space. Having some oversight and plans in place seems prudent to me, but few are talking about it now."