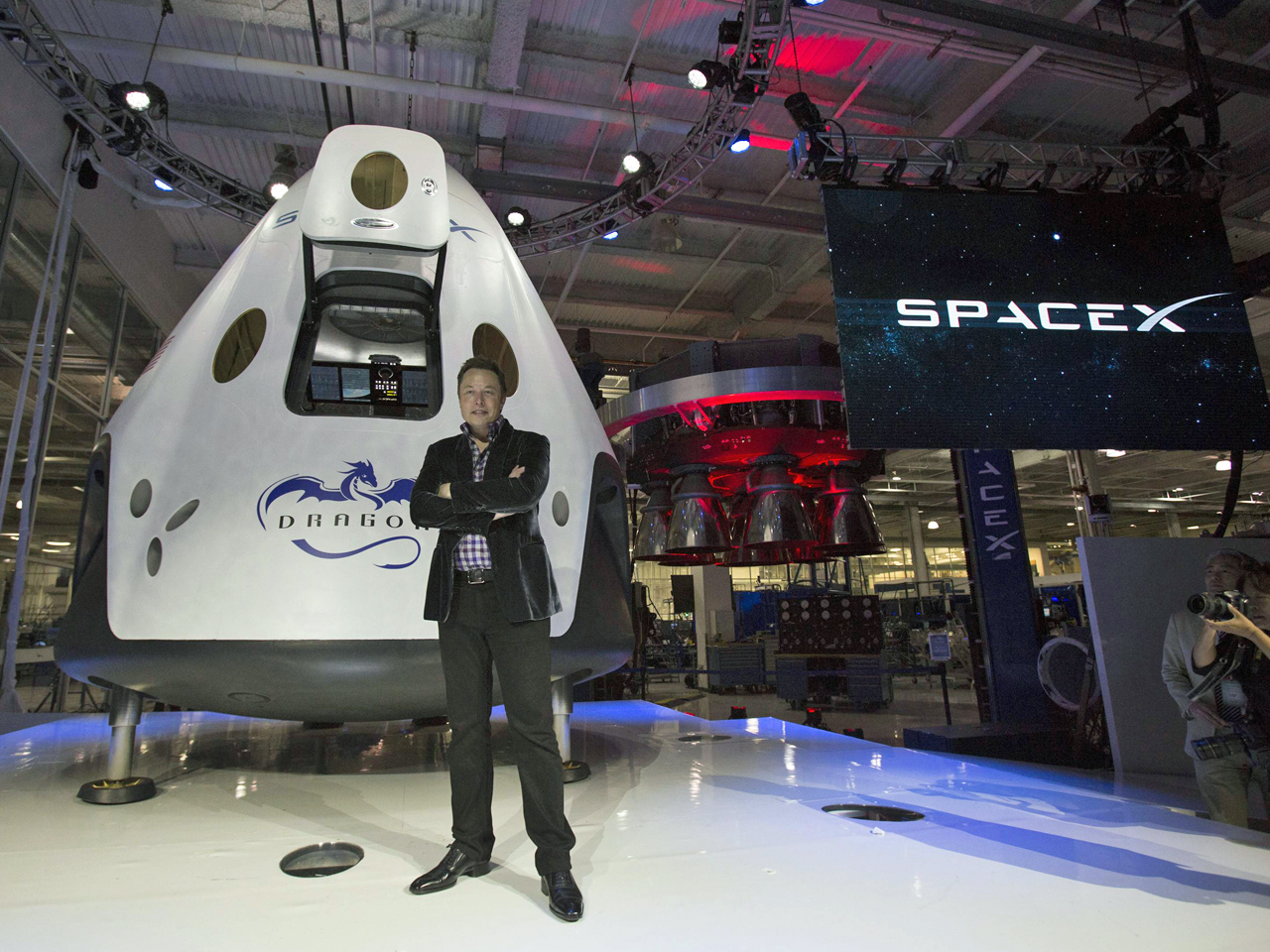 HAWTHORNE, Calif. -- With a showman's flair for the dramatic, electric car builder and rocket designer Elon Musk unveiled a futuristic space capsule Thursday; a sleek reusable ferry craft that could carry astronauts to the International Space Station and bring them home to a pinpoint, rocket-powered landing.

"You'll be able to land anywhere on Earth with the accuracy of a helicopter, which is, I think, something a modern spaceship should be able to do," Musk told a throng of reporters and invited guests.

"It will be capable of carrying seven people, seven astronauts, for several days. It has an improved version of our heat shield and it's all around, I think, really a big leap forward in technology. It really takes things to the next level."

The SpaceX Dragon version 2, or V2, spacecraft is Musk's entry in an ongoing NASA competition to develop a commercial crew capsule to carry U.S. and partner astronauts to and from the space station, ending reliance on Russian Soyuz spacecraft which cost the American space agency more than $70 million per seat under the latest contract.

The SpaceX unveiling came the day after a Soyuz launch that delivered three fresh crew members to the station, including a NASA flight engineer. The mission came amid the most tense standoff between Washington and Moscow in decades, over Russia's actions in Ukraine, subsequent U.S. sanctions and Russian threats to pull out of the station program in 2020 and to stop supplying rocket engines used to help launch American military satellites.

Musk did not mention the Soyuz launch, but the SpaceX unveiling Thursday called renewed attention to NASA's current dependence on Russia for basic space transportation, a situation Musk wants to change with the Dragon V2.

But he's not alone. Musk is competing with aerospace giant Boeing, which is developing its own state-of-the-art capsule known as the CST-100, and Sierra Nevada, which is testing a winged lifting body known as the Dream Chaser that would glide to a runway landing much like NASA's retired space shuttle.

Depending on available funding from Congress, NASA is expected to award one and possibly two contracts late this summer to continue spacecraft development, with the ultimate goal of beginning NASA-sanctioned flights to the station around 2017.

With the dramatic unveiling of the Dragon V2 on Thursday, Musk took center stage, showing off a spacecraft he described as a significant step forward and saying he plans to build it whether SpaceX wins the NASA contract or not. Uncrewed test flights could begin as early as late 2015, he said, with the first piloted test flight anticipated by mid-2016.

The Dragon version 2 builds on the success of SpaceX's Dragon cargo ships, which are already delivering supplies and equipment to the space station under a $1.6 billion contract with NASA. The cargo ships are the first commercially developed spacecraft to visit the station and the only U.S.-built vehicle now flying that is capable of bringing cargo back to Earth from orbit.

The Dragon version 2, with an improved heat shield, a propulsive landing system and state-of-the-art computer control, is a major upgrade.

"Going from Dragon version 1, we wanted to take a big step in technology and really create something that was a step change in spacecraft technology," Musk said.

Dressed in casual attire, Musk unveiled the version 2 spacecraft for invited reporters and guests at SpaceX's Hawthorne, Calif., factory, dropping a curtain after a recorded countdown to reveal the black-and-white capsule, prompting enthusiastic cheers and applause.

He said the Dragon V2 will be capable of flying automated or manual approaches to the space station, gliding for docking without needing any assistance from the lab's robot arm, which he described as "a significant upgrade."

And while it is equipped with a rocket-powered landing system, the capsule retains the parachutes used by the uncrewed Dragon V1 cargo ship.

He said the capsule could safely land even if two of its SuperDraco engines failed. The engines, designed and built by SpaceX, generate 16,000 pounds of thrust and work in pairs. If one fails, Musk said, the other can increase power to compensate. He said the engines, which also would provide emergency launch abort power, will be built using 3D printing, a first for a production spacecraft.

Being able to land with rocket power is important, Musk said, because "it enables rapid reusability of the spacecraft. You can just reload propellants and fly again."

"This is extremely important for revolutionizing access to space," he said. "As long as we continue to throw away rockets and spacecraft we'll never have true access to space. It'll always be incredibly expensive. If aircraft were thrown away with each flight, nobody would be able to fly."

Showing off the interior of the spacecraft, Musk opened the hatch and climbed in, generating yet another round of cheers from an appreciative crowd. Sitting in the contoured pilot's seat, he pulled down a futuristic video panel where software-generated displays were seen along with a bank of physical controls.

"So there you have it," he concluded, "Dragon version 2, capable of carrying up to seven astronauts, propulsively landing almost anywhere in the world and something that's designed to be fully reusable, so you can fly this multiple times, allowing for potential dramatic reductions in the cost of access to space."

The SpaceX capsule would be launched atop the company's Falcon 9 rocket. Boeing and Sierra Nevada plan to use Atlas 5 rockets built by United Launch Alliance. The Atlas 5 first stage uses the Russian-built RD-180 engine that a Russian deputy prime minister has threatened to restrict.

The threatened ban would affect U.S. military launches and apparently would not apply to civilian missions like piloted NASA flights to the space station.

Musk did not mention launch vehicles during his presentation Thursday, but he has played a major role in the current debate over the RD-180, questioning its use in a lawsuit SpaceX filed challenging a sole-source Air Force contract for more than two dozen United Launch Alliance rockets.

A Pentagon panel has reportedly recommended building a U.S. replacement for the RD-180 and lawmakers are considering funding to begin development. How all that might factor into NASA's crew ferry craft competition remains to be seen.