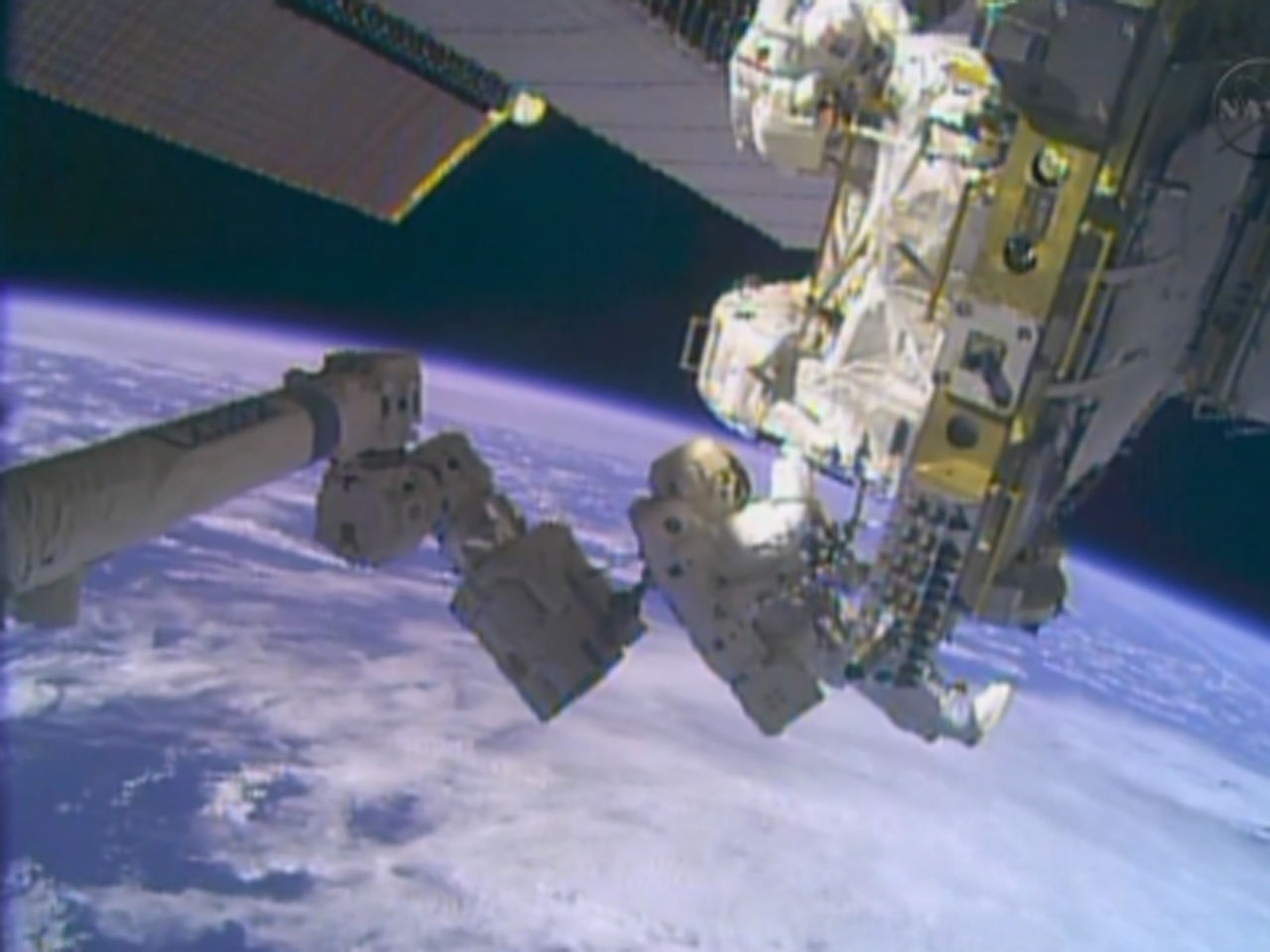 CAPE CANAVERAL, Fla. -- An hour-and-a-half into a planned six-hour spacewalk, astronauts Rick Mastracchio and Mike Hopkins began the process of disconnecting a spare ammonia pump module from a storage pallet on the right side of the International Space Station's solar power truss.

Mastracchio is working to unplug three electrical cables while Hopkins, anchored to the end of the station's robot arm, is standing by to help out with bolts holding the 780-pound pump assembly in place.

Once the unit is free, Japanese astronaut Koichi Wakata, operating the robot arm from a work station inside the Destiny laboratory module, will pull Hopkins and the pump module away from the storage platform and maneuver them both inboard to the S1 truss segment where the replacement pump will be installed.

Spectacular video from orbit earlier today showed the two astronauts as they got in position and prepared their equipment during a daylight pass over South America and central Europe.

"Yeah, you're right over the heart of South America," astronaut Douglas Wheelock replied from mission control in Houston.

A few minutes later, the station was over Europe.

"How do you like riding the arm, Mike?" Mastracchio asked.

"Yeah, you're kind of hanging on by your feet, aren't you?"

So far, the spacewalk is proceeding smoothly with no technical problems of any significance and the astronauts' spacesuits are performing normally.

Switching roles for their second spacewalk, Hopkins will spend most of the day anchored to the end of the station's robot arm, while Mastracchio will assist as a tethered free floater.

"Let's go to work," Hopkins said just before floating out of the airlock as the space station sailed 260 miles above eastern China.

Assuming the repair work goes well and a third spacewalk is not required, two Russian cosmonauts will venture outside Friday for an already planned excursion to install cameras on the Zvezda command module that will be used by a Canadian company to beam down high-definition Earth views to subscribers around the world.

Today's spacewalk is the 258th by U.S. astronauts, the 176th devoted to station assembly and maintenance since construction began in 1998, the 10th so far this year, the eighth for Mastracchio and the second for Hopkins.

The goal of the excursion is to install a replacement ammonia pump module in coolant loop A, one of two cooling systems used to dissipate the heat generated by the station's electrical systems. A valve in the loop A pump assembly malfunctioned Dec. 11, partially disabling the system and forcing flight controllers to power down non-essential systems.

More important, the malfunction left the station one failure away from a more drastic powerdown -- and possible evacuation -- were the lone operational coolant loop break down.

During a five-hour 28-minute spacewalk Saturday, Mastracchio and Hopkins disconnected the suspect ammonia pump module on the right side of the station's main power truss, pulled it from its slide-in rack in the S1 segment of the truss and mounted it on a nearby storage fixture to complete phase one of the coolant system repair job.

Because of an accidental switch throw inside the airlock at the end of the spacewalk, a small amount of water got into the plumbing of Mastracchio's backpack, raising the possibility that potentially damaging ice could form during the second EVA.

As a result, Mastracchio is wearing a different upper torso and backpack, No. 3005, for the second spacewalk while Hopkins is using the one he wore Saturday, No. 3011. That's the same suit that developed a potentially dangerous leak during a July spacewalk.

After exhaustive troubleshooting, engineers concluded the leak was caused by contamination that clogged a filter. While the root cause of the contamination has not been determined, the astronauts replaced suspect components, and both suits performed normally during Saturday's spacewalk.

During their second spacewalk Tuesday, Mastracchio and Hopkins plan to take a spare pump module from a storage pallet attached to the S3 truss segment, install it in place of the faulty unit and reconnect four ammonia lines and five power cables.

Assuming the spare unit works as expected, flight controllers will power up the systems that were shut down earlier, restoring the space station to normal operations.

The work marks the second time in three years station astronauts have had to replace the coolant loop A pump module.

In August 2010, two other astronauts needed three spacewalks to install the unit that was removed Saturday after the pump in the original module suffered a failure and stopped working, taking down the entire coolant loop and forcing the crew to implement widespread powerdowns.

This time around, the pump in question was in good condition, but a flow control valve in the system's plumbing malfunctioned, resulting in lower-than-allowable ammonia temperatures. Engineers attempted to restore coolant loop A to near-normal operation using a software "patch," but NASA managers ultimately decided to replace the pump module.

During the 2010 spacewalks, the astronauts ran into problems with ammonia line quick-disconnect fittings, but applying lessons learned, Mastracchio and Hopkins had no trouble Saturday, getting far enough ahead of schedule to go ahead and remove the pump module, work originally planned for the second spacewalk.

Assuming the replacement pump gets installed and works properly, NASA will forego a third spacewalk, leaving the faulty pump unit where it was mounted Saturday for the next several months.

At some point, a future team of spacewalkers will need to move it to a more secure storage location, but there's no hurry. A thermal analysis shows the pump module can remain where it is until next summer.

In the meantime, two Russian cosmonauts, Expedition 38 commander Oleg Kotov and Sergey Ryazanskiy, are gearing up for the spacewalk of their own on Friday to install the high-definition and medium-resolution cameras for a Canadian company, UrtheCast, and to replace external materials science experiments.

They are expected to open the hatch of the Pirs airlock module around 7 a.m. Friday to begin the year's 11th and final planned space station spacewalk.