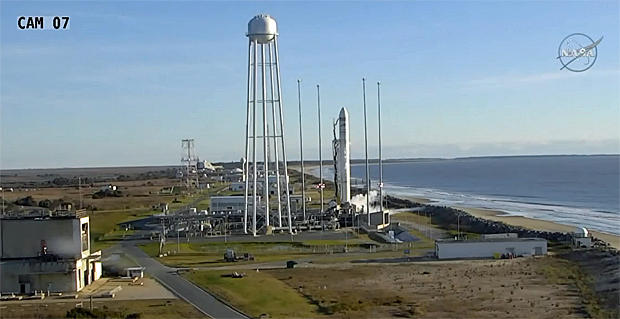 The launch of an Orbital ATK Antares rocket carrying a Cygnus cargo ship bound for the International Space Station was scrubbed at the last minute Saturday when an aircraft strayed into the restricted launch danger zone.

The countdown was ticking smoothly toward zero at 7:37 a.m. EST (GMT-5) when a flight controller suddenly called out to the launch conductor, saying "LC, LC, we are red. We have an aircraft in the hazard area."

It was not immediately known whether the intruder was a private plane or a commercial aircraft. The FlightAware website showed several commercial jets in transit over the Atlantic Ocean east and southeast of the launch site, but it was not known if any of them were to blame.

In any case, flight rules for rocket launches forbid takeoff if there is any chance a malfunctioning booster could threaten life or property.

If all goes well, the Cygnus will reach the space station around 4:45 a.m. Tuesday, roughly the same time NASA and United Launch Alliance plan to launch a Delta 2 rocket from Vandenberg Air Force Base, Calif., to put a NOAA polar orbiting weather satellite into orbit.