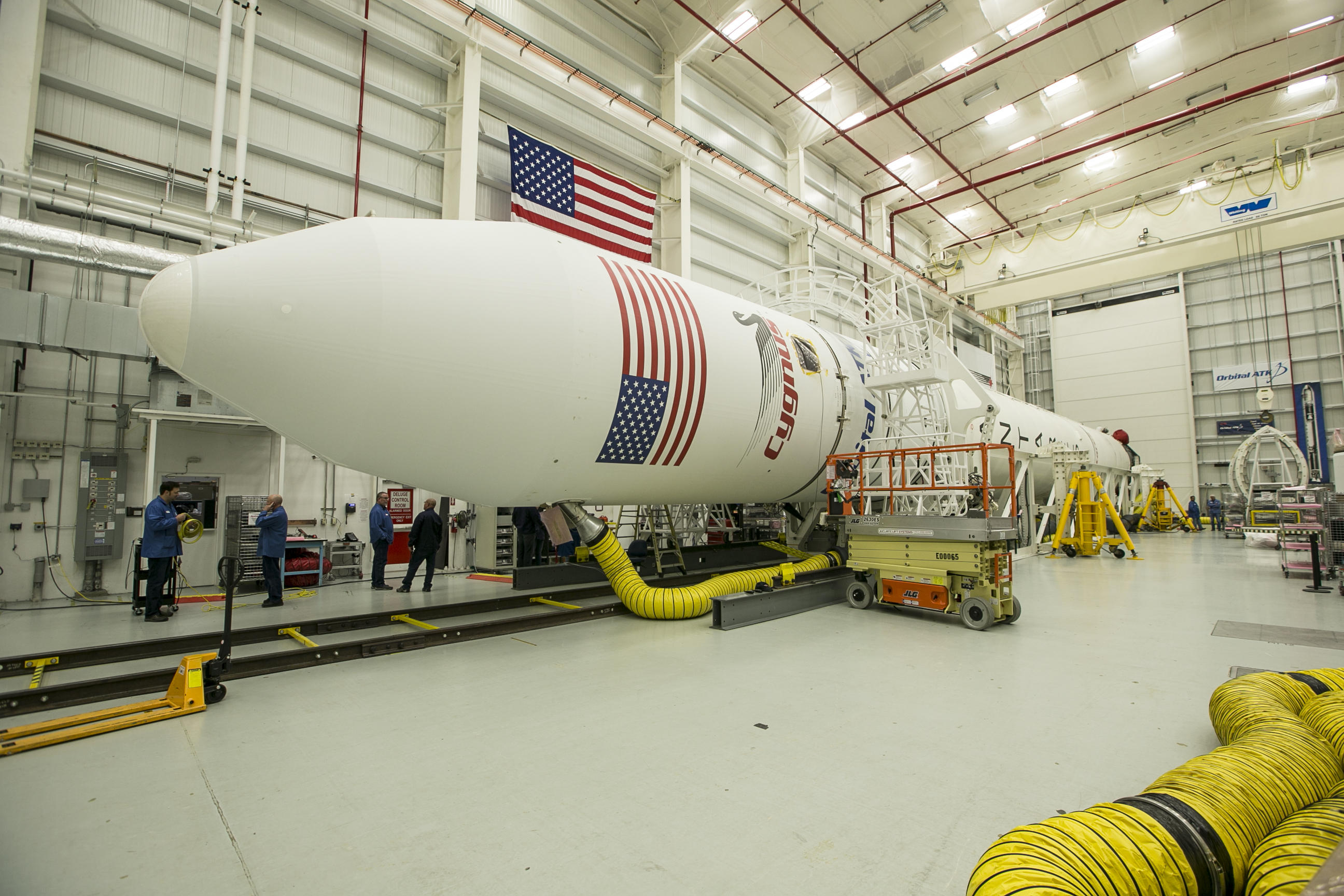 Orbital ATK engineers are readying an upgraded Antares rocket for a sub-freezing launch from the Virginia coast early Saturday to boost a Cygnus cargo ship into orbit loaded with 7,400 pounds of equipment and supplies bound for the International Space Station.

Liftoff from Pad 0A at the Mid-Atlantic Regional Spaceport (MARS) at NASA's Wallops Island, Virginia, flight facility is targeted for 7:37:25 a.m. EST (GMT-5), roughly the moment Earth's rotation carries the launch site into the plane of the space station's orbit -- a requirement for rendezvous missions.

Forecasters predicted a 95 percent chance of good weather, and engineers said the expected launch-time temperature of around 25 degrees Fahrenheit posed no problems for the Antares rocket.

"We are looking forward to a very exciting morning tomorrow," said Dan Hartman, deputy manager of the space station program at the Johnson Space Center in Houston. "We have Cygnus completely packed full of cargo on this mission, 7,400 pounds of cargo."

In addition, two small "cubesats" will be moved into the station for launch later from the Japanese Kibo module along with three others already on board the lab.

The Cygnus is carrying 14 other cubesats that will be launched after the cargo ship departs the station on Dec. 4, including one to test high-speed laser communications technology and another to demonstrate an integrated solar array-antenna system.

Research materials and equipment carried up in the Cygnus will help support some 300 investigations that "span all the scientific disciplines that ISS supports, including human research, physical sciences, biology and biotechnology, technology demonstration, Earth and space science and eduction," said Camille Alleyne, a science planner at the Johnson Space Center.

Assuming an on-time liftoff, the Cygnus should reach the station early Monday, pulling up to within about 30 feet of the lab complex and then standing by while Italian astronaut Paolo Nespoli, operating the station's robot arm, locks on to a grapple fixture.

From there, flight controllers in Houston will take over arm operations, pulling the Cygnus in for berthing at the Earth-facing port of the station's central Unity module. The astronauts will begin unloading the spacecraft the next day.

One piece of equipment going up on the Cygnus is a "cold box" packed with fresh food for the crew.

"On every mission, we have crew care packages we send up from family members," Hartman said. "It's the first time we've flown ... a long-duration cold box ... and we have packed that full of fresh vegetables, fresh fruit, so the crew's going to get some treats when they open up the hatch."

If all goes well, the Cygnus will be detached from Unity on Dec. 3. Before it is released, the station arm will position it within a few feet of a docking port atop the Harmony module, one of two that will be used by commercial crew ferry ships being built by Boeing and SpaceX.

The Cygnus will serve as a stand-in of sorts, allowing engineers to assess whether visiting spacecraft might interfere with station's ability to receive Global Positioning System navigation signals. The Cygnus will be held in place near Harmony's upper port for about 12 hours before being released from the arm on Dec. 4.

The cubesats will be launched from the Cygnus after separation. The cargo ship, loaded with several tons of space station trash and no-longer-needed equipment, then will plunge back into the atmosphere, burning up over the Pacific Ocean.

Saturday's launching will mark NASA's fifth space station supply run so far this year. It is Orbital's eighth Cygnus flight since 2014 and the company's fifth since an earlier version of the Antares booster exploded seconds after launch in October 2014.

That failure was blamed on the rocket's original first-stage engines, left over from the Russian moon program in the 1970s. In the wake of the mishap, Orbital switched to state-of-the-art Russian-built RD-181 powerplants, buying three United Launch Alliance Atlas 5 rockets as a stop-gap measure before successfully launching the first re-engined Antares 230 in October 2016.

Saturday's flight will be the second for the upgraded Antares with four more missions on tap through April 2019 under Orbital's current resupply contract. At least six additional flights are expected under a second NASA contract.

Space station managers plan to follow up the Cygnus flight with launch of a SpaceX Falcon 9 rocket Dec. 4 from pad 40 at the Cape Canaveral Air Force Station.

That pad was heavily damaged when a Falcon 9 exploded five minutes before a planned pre-flight engine test in September 2016, but the complex has been repaired and the NASA resupply launch will mark the pad's return to active status.