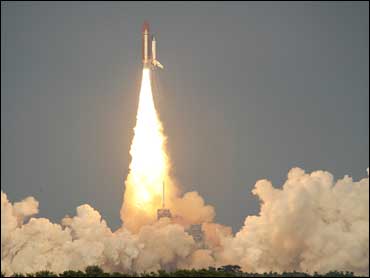 Space shuttle Endeavour blasted in orbit Wednesday carrying teacher-astronaut Barbara Morgan, who after more than two decades is finally carrying out the dream of Christa McAuliffe and the rest of the fallen Challenger crew.

Endeavour and its crew of seven rose from the seaside pad at 6:36 p.m., right on time, and pierced a solidly blue sky. They're expected to reach the international space station on Friday.

Once Endeavour was safely past the 73-second mark of the flight, the moment when Challenger exploded shortly after the call "Go at throttle up," Mission Control exclaimed, "Morgan racing toward space on the wings of a legacy."

Immediately after the shuttle reached orbit, Mission Control announced, "For Barbara Morgan and her crewmates, class is in session."

Morgan was McAuliffe's backup for Challenger's doomed launch in 1986 and, even after two space shuttle disasters, never swayed in her dedication to NASA and the agency's on-and-off quest to send a schoolteacher into space. She rocketed away in the center seat of the cabin's lower compartment, the same seat that had been occupied by McAuliffe.

"Good luck, godspeed and have some fun up there," launch director Michael Leinbach said.

Snakes used to have arms and legs – until these mutations

More than half of NASA's 114 Teacher-in-Space nominees in 1985 gathered at the launch site, along with hundreds of other educators, all of them thrilled to see Morgan continue what McAuliffe began.

Also on hand was the widow of Challenger's commander, who said earlier in the day that she would be praying and pacing at liftoff and would not relax until Morgan was safely back on Earth in two weeks.

"The Challenger crew — my husband, Dick Scobee, the teacher Christa McAuliffe — they would be so happy with Barbara Morgan," said June Scobee Rodgers. "It's important that the lessons will be taught because there's a nation of people waiting, still, who remember where they were when we lost the Challenger and they remember a teacher was aboard."

NASA Administrator Michael Griffin met Tuesday night with several members of the Challenger astronaut families in town for the launch — although not the McAuliffe family — and said they did not seem worried.

"They didn't act like they came to see another tragedy," he said. "They're here to celebrate her having a chance to fly."

Griffin knows better than most that NASA could lose another teacher in flight.

"Every time we fly I know that we can lose a crew," he told The Associated Press hours before the launch. "That occupies a large portion of my thoughts. Unless we're going to get out of the manned space flight business, that thought is going to be with me every time we fly."

For NASA, the launch is about more than closing a chapter on Challenger, reports CBS News correspondent Kelly Cobiella. The countdown clock is ticking on the shuttle program, with the last flight set for 2010. And there are worries about what's next: nearly five years of Americans relying on Russia to get U.S. astronauts into space until another U.S. vehicle is ready to fly.

A week into the flight, Morgan, 55, will speak with schoolchildren in Idaho, where she lived and taught before joining NASA in 1998 as the first teacher to undergo full astronaut training. She'll also answer questions from students in two other states if the mission is extended from 11 days to 14 days as planned. The crew will test a new power converter that should allow the shuttle to remain docked to the station longer than ever before.

Endeavour is fresh from an overhaul that's kept it grounded for nearly five years. Besides the power transfer system, the shuttle has been equipped with complete satellite navigation and improved main engine monitoring equipment.

Liftoff had been scheduled for Tuesday, but last week NASA delayed the flight by a day because of a leaky valve in the crew cabin that needed to be replaced.

NASA is hoping a successful flight will draw some attention away from the rash of embarrassments it's faced this year, most recently a NASA-commissioned medical panel's report suggesting astronauts were intoxicated on launch day on at least two occasions.

Griffin said Wednesday that NASA is investigating the anonymous allegations. The space agency's top safety official has gone back 10 years through every shuttle flight and can find no flight surgeon, astronaut or document hinting at launch day drinking by a crew member, he said.

"This is not a credible scenario. They're on TV. We just watched them having breakfast," Griffin said, referring to the Endeavour astronauts.