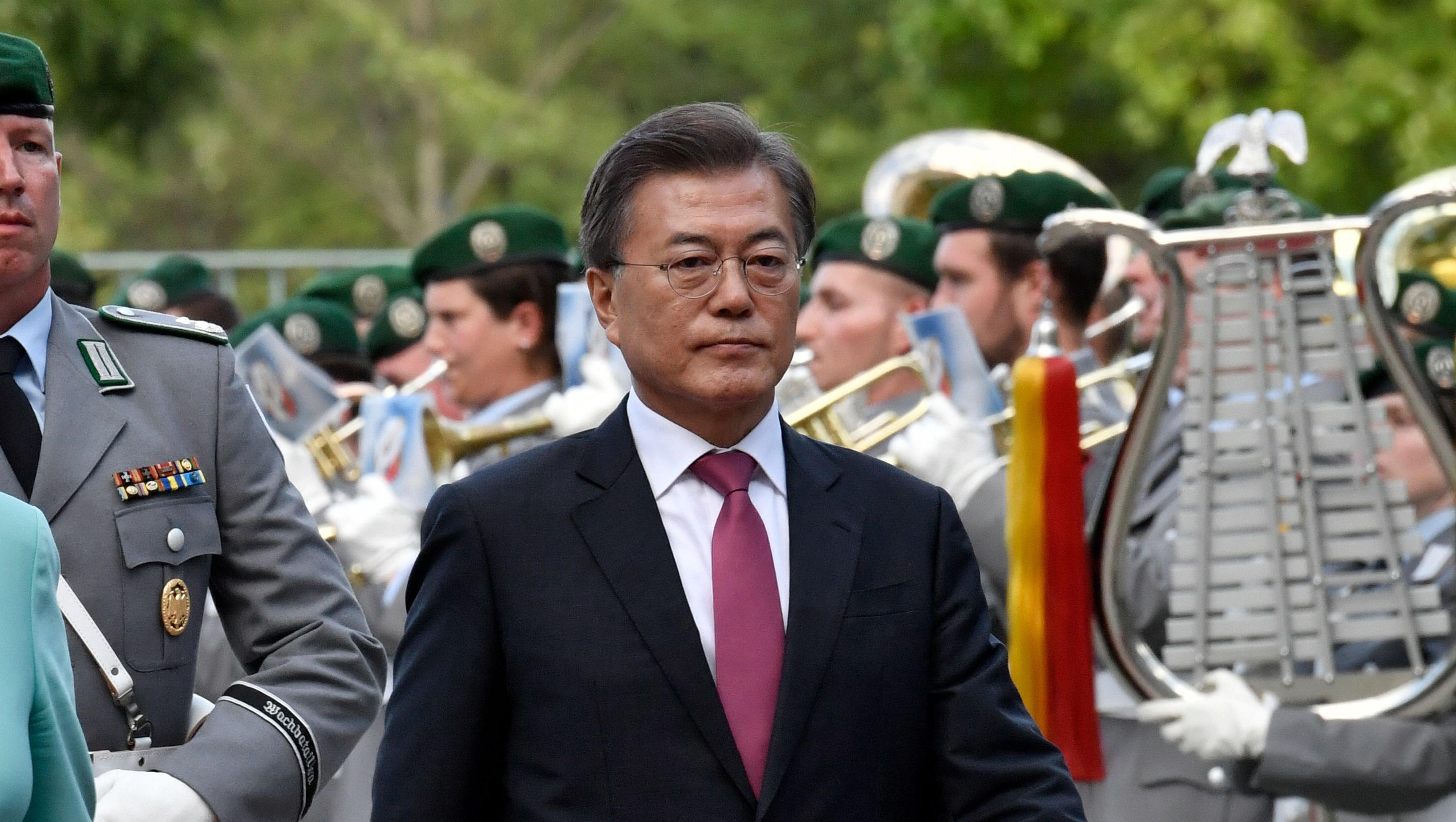 SEOUL, South Korea -- South Korea President Moon Jae-in said Wednesday that the world should look at tougher sanctions against North Korea and insisted the problem over the country's nuclear and missile programs must be solved peacefully.

Speaking through an interpreter in Berlin before the Group of 20 summit, Moon called North Korea's successful test of an intercontinental ballistic missile (ICBM) "a big threat and provocation" and that there should be consideration of "more intensive possibilities of sanctions."

Kim Jong Un, the North Korean leader, vowed Wednesday his nation will "demonstrate its mettle to the U.S." and never put its weapons programs up for negotiations, a day after the provocative test, the country's first successful launch of an ICBM.

The hard line suggests that North Korea will conduct more weapons tests until it perfects nuclear-armed missiles capable of striking anywhere in the United States. Analysts say Kim's government believes nuclear weapons are key to its survival and could be used to wrest concessions from the U.S.

Tuesday's ICBM launch, confirmed by U.S. and South Korean officials, was a milestone in North Korea's efforts to develop long-range nuclear-armed missiles. But the North isn't there yet, and many analysts say it needs more tests to perfect such an arsenal.

Worry also spread in Washington and at the United Nations, where the U.S., Japan and South Korea requested an emergency U.N. Security Council session Wednesday. U.S. Secretary of State Rex Tillerson said the U.S. response would include "stronger measures to hold the DPRK accountable," using the acronym for the nation's formal name, the Democratic People's Republic of Korea.

U.S. Ambassador Nikki Haley warned China against trading with North Korea in violation of existing sanctions. "Such countries would also like to continue their trade arrangements with the United States," Haley said. "That's not going to happen."

North Korean state media described leader Kim as "feasting his eyes" on the ICBM, which was said to be capable of carrying a large nuclear warhead, before its launch.

"With a broad smile on his face," Kim urged his scientists to "frequently send big and small 'gift packages' to the Yankees," it said, an apparent reference to continuing the stream of nuclear and missile tests Kim has ordered since taking power in late 2011.

North Korea was also pleased that its test came as Americans celebrated Independence Day. State media said Kim told "scientists and technicians that the U.S. would be displeased to witness the DPRK's strategic option" on its Independence Day.

Kim also said North Korea "would neither put its nukes and ballistic rockets on the table of negotiations in any case nor flinch even an inch from the road of bolstering the nuclear force chosen by itself unless the U.S. hostile policy and nuclear threat to the DPRK are definitely terminated," the Korean Central News Agency reported.

The missile launch was a direct rebuke to President Trump's earlier declaration on Twitter that such a test "won't happen!" and to Moon, who was pushing to improve strained ties with the North.

South Korea's Defense Ministry said it was unable to verify whether North Korea has mastered re-entry technology for an ICBM. It said North Korea may now conduct a nuclear test with "boosted explosive power" to show off a warhead to be mounted on a missile.

The U.N. Security Council could impose additional sanctions on North Korea, but it's not clear they would stop it from pursuing its nuclear and missile programs since the country is already under multiple rounds of U.N. sanctions for its previous weapon tests.

"An attempt to curb Kim Jong Un's nuclear and missile ambitions has clearly failed. I think North Korea won't stop its nuclear drive until it feels that it has reached the level that it wants to reach," said Lim Eul Chul, a North Korea expert at South Korea's Kyungnam University. "I don't know when North Korea can reach that level. But I would say it's imminent."

There is a consensus among many analysts that Kim's government won't give up its nuclear program because it believes it guarantee its survival from outside threats. But once it possesses functioning ICBMs, it would also have a stronger bargaining position and might propose talks with the United States on reducing those threats, possibly in exchange for freezing but not dismantling some of its nuclear or missile activities, the analysts say.

North Korea might seek a downsizing or suspension of joint U.S.-South Korean military exercises that it views as rehearsals for an invasion, or the signing of a peace treaty officially ending the 1950-53 Korean War that could be used as pretext for demanding the withdrawal of the 28,500 American troops currently in South Korea. The war ended with an armistice, not a peace treaty, leaving the Korean Peninsula technically still in a state of war.

If the United States were to hold talks with a North Korea capable of attacking the entire U.S. mainland with nuclear weapons, those negotiations would be like "arms reduction talks," Lim said.

North Korea already has a reliable arsenal of shorter-range missiles and is thought to have a small number of atomic bombs. Some outside civilian experts believe the North has the technology to mount warheads on shorter-range Rodong and Scud missiles that can strike South Korea and Japan, two key U.S. allies where about 80,000 American troops are stationed. But it's unclear if it has mastered the technology needed to build an atomic bomb that can fit on a long-range missile.

Regional disarmament talks on North Korea's nuclear program have been stalled since 2009.