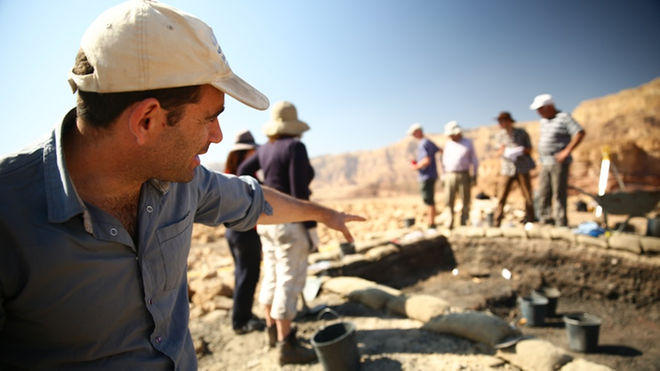 Archaeologists in Israel say they’ve discovered elements of a sophisticated gatehouse at a mining camp that dates back to the biblical era of King David and King Solomon in the 10th century B.C.

Recent excavations at the hilltop copper-smelting factory known as Slaves’ Hill in the Timna Valley have revealed a fortified gatehouse with donkey stables. The archaeologists, led by Erez Ben-Yosef of Tel Aviv University, think these features show that this Iron Age settlement had a highly organized defense system and depended on an impressive network of long-distance trade.

The vast copper deposits in the southern Levant have been exploited by humans for hundreds of years. This particular camp was first identified in the 1930s by the famous American biblical archaeologist Nelson Glueck. He called it Slaves’ Hill, theorizing that the massive walls that surrounded the perimeter were meant to keep enslaved laborers from escaping into the desert.

Previous research by Ben-Yosef’s team, however, found that the laborers did not have a typical slave’s diet; instead, the metalworkers ate good cuts of meat, pistachios and fish imported from the Mediterranean, suggesting they had a rather high status and were valued for their craft.

For the newest study, published in the Journal of Archaeological Science: Reports, Ben-Yosef and his colleagues focused on the only entrance to the mining camp and the end of the steep path to the top of the mesa. Excavations in 2014 revealed a prominent gatehouse with two rooms on each side of the main passageway that led through the camp’s walls. The gatehouse probably would have been a prominent landmark in the area, serving an important administrative —and defensive —function: to control and track the flow of goods and people into and out of the camp, the researchers said.

“While there is no explicit description of ‘King Solomon’s mines’ in the Old Testament, there are references to military conflicts between Israel and the Edomites in the Arava Valley,” Ben-Yosef said in a statement.

The Bible describes a battle between the Edomites, a seminomadic tribal confederacy, and King David’s army in the Arabah (also spelled Arava) Valley. The historical accuracy of this account is debated, but the discovery of elements of a sophisticated fortification at Slaves’ Hill suggests that copper might have been the resource at stake during military struggles in the region, Ben-Yosef said.

“Copper was a rare product and very challenging to produce,” Ben-Yosef said. “Because copper -- like oil today, perhaps -- was the most coveted commodity, it landed at the very heart of military conflicts. The discovery of the fortification indicates a period of serious instability and military threats at that time in the region.”

The researchers also found intact dung piles outside both rooms of the gatehouse and interpreted those areas as donkey stables. The researchers even investigated the contents of the dung, which revealed that the donkeys were not fed straw but hay and grape pomace (the skins, pulp and stems of grapes), likely delivered from the Mediterranean region, hundreds of miles away.

“The food suggests special treatment and care, in accordance with the key role of the donkeys in the copper production and in trade in a logistically challenging region,” Ben-Yosef said.

The dung also appeared to be deliberately piled against a wall of the gatehouse, suggesting it might have been collected and used as fuel for the copper-smelting furnaces, the researchers wrote.