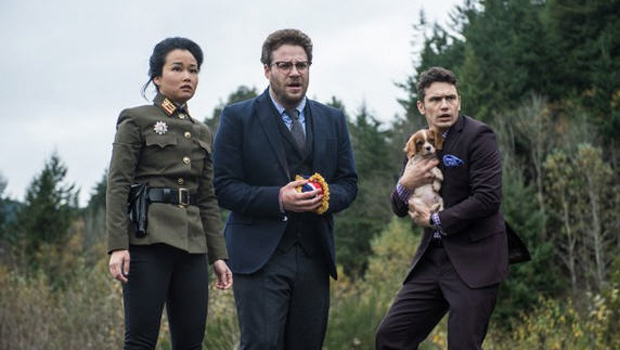 If you don't want to go to any of the movie theaters showing "The Interview" on Christmas Day, you can now watch the comedy from the comforts of your own home.

Sony Pictures announced Wednesday that the film will be available for rental on a variety of digital platforms including Google Play, YouTube Movies, Microsoft's Xbox Video and the dedicated website www.seetheinterview.com beginning Wednesday.

The news comes a day after Sony announced a limited theatrical release of "The Interview," putting back into the theaters the comedy that prompted an international incident with North Korea, threats of violence and outrage over its canceled release. The decision not to release the film was widely criticized, with President Barack Obama one of Sony's harshest critics.

"It has always been Sony's intention to have a national platform on which to release this film," Sony Pictures chair and CEO Michael Lynton said in a statement Wednesday. "Negotiations with digital providers began last Wednesday, and, as of this morning the film will be available in around 300 independently owned theaters starting Thursday.

"We never stopped pursuing as wide a release as possible for "The Interview." It was essential for our studio to release this movie, especially given the assault upon our business and our employees by those who wanted to stop free speech. We chose the path of digital distribution first so as to reach as many people as possible on opening day, and we continue to seek other partners and platforms to further expand the release."

"Last Wednesday Sony began contacting a number of companies, including Google, to ask if we'd be able to make their movie, 'The Interview,' available online. We'd had a similar thought and were eager to help -- though given everything that's happened, the security implications were very much at the front of our minds," Google's Chief Legal Officer David Drummond wrote in a post on the company's official blog. "Of course it was tempting to hope that something else would happen to ensure this movie saw the light of day. But after discussing all the issues, Sony and Google agreed that we could not sit on the sidelines and allow a handful of people to determine the limits of free speech in another country (however silly the content might be)."

"As the president made clear on Friday, we do not live in a country where a foreign dictator can start imposing censorship here in the United States. With today's announcements, people can now make their own choices about the film, and that's how it should be," Schultz said.

"The Interview" stars James Franco and Seth Rogen both spoke out on social media after the announcement.

"You wanna watch The Interview?? You can RIGHT [expletive] NOW!! Go to http://www.theinterview-movie.com . Thanks Sony for making it happen. Booyah," Rogen tweeted, adding, "I need to say that a comedy is best viewed in a theater full of people, so if you can, I'd watch it like that. Or call some friends over."

The unusual release marks one of the first times a studio movie will be shown simultaneously in theaters and video on demand. Usually, larger studio films aren't made available on digital platforms for at least a few months after the initial theatrical release, to ensure maximizing theater box office.

"This release represents our commitment to our filmmakers and free speech," said Lynton. "While we couldn't have predicted the road this movie traveled to get to this moment, I'm proud our fight was not for nothing and that cyber criminals were not able to silence us."