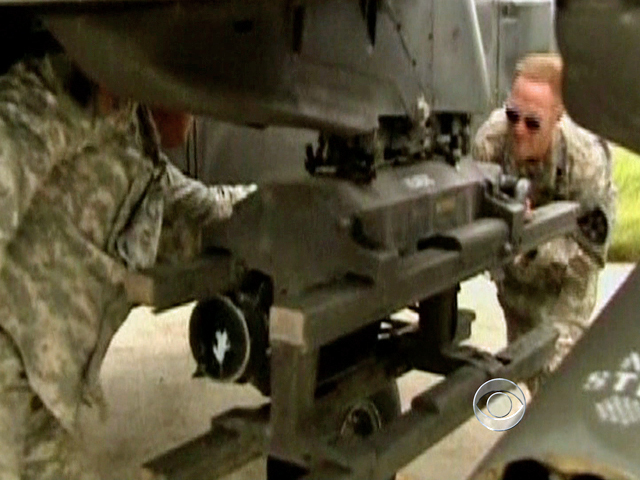 (CBS News) WASHINGTON The cybersecurity issues aren't the only U.S. concern has about China. The Pentagon is growing increasingly worried about relying on military components made in China.

The hellfire missile -- launched from helicopters, jets and predator drones -- has been a critical weapon in the war on terror. But the propellant that fires the missile must be imported from China.

It's not the only area where the Pentagon military depends on imports. The glass in U.S.-made night vision goggles requires a soft white-colored metal called lanthanum, 90 percent of which comes from China.

"We need to onshore our critical defense supply chains," said retired Army Gen. John Adams. He is the author of a new report, which lists 14 categories where the military relies on imported minerals or technologies. Some of those supplies, Adams said, could be stopped during a conflict.

"We need to make sure that our most advanced and our most critical weapons systems don't depend upon our strategic competitor to supply those components to us," he said.

A Pentagon spokesman tells CBS News by email that the military has a process "to determine where U.S.-sourced components are necessary for security reasons. But where they are not, the U.S. taxpayer expects...cost-effective procurement, including sourcing from foreign companies..."

But the Pentagon has grown concerned over Chinese imports. During a diplomatic clash between China and Japan over a disputed island chain, China stopped exports of rare minerals that Japan needed for manufacturing.

"We've already seen glimmers of where a country like China decides to use the supply chain and its economic muscle for diplomatic and geopolitical purposes," said CBS News national security analyst Juan Zarate.

Pentagon officials say they have already addressed two of the areas identified in the report. Officials have ordered the Pentagon to purchase more domestically-produced minerals for use in night vision goggles, and they have invested in a new domestic supplier to make propellant for the hellfire missile.