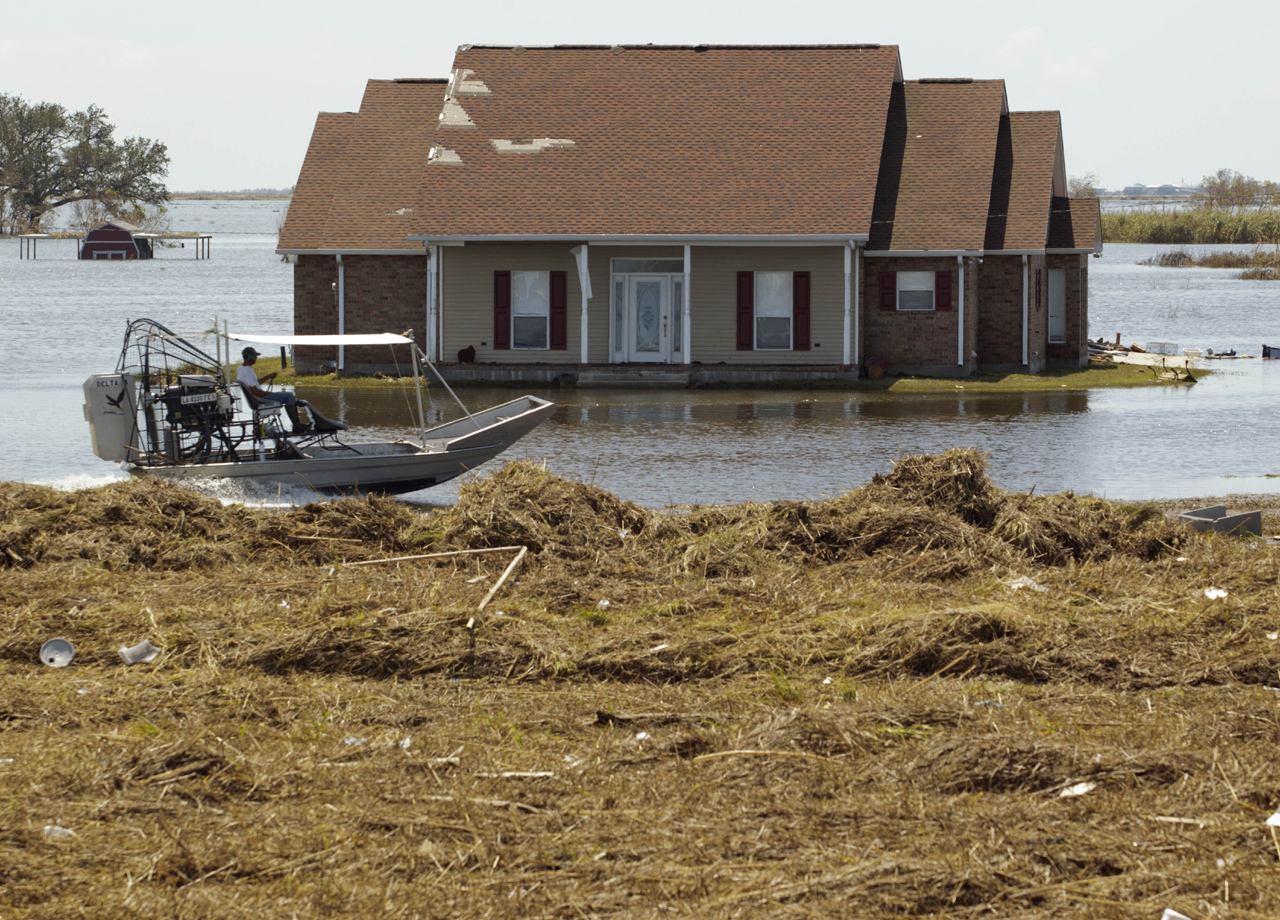 (AP) LAPLACE, La. - At the urging of residents who have long felt forgotten in the shadow of more densely populated New Orleans, the Army Corps of Engineers says it will look into whether the city's fortified defenses pushed floodwaters provoked by Hurricane Isaac into outlying areas.

However, the Corps has said it is unlikely scientific analysis will confirm that theory, suggested not only by locals, but by some of the state's most powerful politicians. Instead, weather experts say a unique set of circumstances about the storm — not the floodwalls surrounding the New Orleans metro area — had more to do with flooding neighborhoods that in recent years have never been under water because of storm surge.

Isaac was a large, slow-moving storm that wobbled across the state's coast for about two and a half days, pumping water into back bays and lakes and leaving thousands of residents under water outside the massive levee system protecting metropolitan New Orleans. It was blamed for seven deaths and damaged thousands of homes on the Gulf Coast.

The Corps' study was prompted by the suggestion that Isaac's surge bounced off the levees and floodgates built since Hurricane Katrina in 2005 and walloped communities outside the city's ramparts.

Blaming the Army Corps of Engineers is nothing new in southern Louisiana, a region that is both dependent on the Corps and by instinct distrustful of an agency that wields immense power in this world of harbors, wetlands, rivers and lakes, all of which fall under the agency's jurisdiction.

The Corps was roundly criticized after Hurricane Katrina, which pushed in enough water to break through the levees that had surrounded New Orleans. Much of the city was left under water, and since then the government has spent millions rebuilding the system of floodwalls protecting the metro area.

Before that, the Corps was blamed for the unraveling of coastal marshes by erecting levees on the Mississippi River.

In towns including the bedroom community of LaPlace, people want answers. There, communities were under water even though they had never before flooded because of storm surge.

"It has a lot of us questioning," said Ed Powell, a 47-year-old airport emergency worker who's lived in LaPlace for 15 years and had never seen flooding on his street until Isaac hit.

On Friday, U.S. Sen. David Vitter asked the Corps to commission an independent study to determine if the new floodwalls, gates and higher levees around greater New Orleans caused water to stack up elsewhere.

The Corps is expected to complete its study within two months, said U.S. Sen. Mary Landrieu, D-La., who joined Vitter in calling for the study. The Corps said it was too early to say how much the study would cost. The agency said Corps researchers would conduct the study and that it will be peer-reviewed.

In a statement, the corps said it expects the study will find "minimal" changes in surge elevation because of its works around New Orleans. It based that assessment on previous modeling. The agency said it would not comment further until the scientific work is done.

Isaac came ashore as a Category 1 storm, but that classification is based on wind speed, not surge predictions. In the past, much stronger storms have produced much smaller surge levels. Isaac had a broad wind field — at times, more than 200 miles from its center — that made it capable of scooping up a lot of water, said James Franklin, the chief of hurricane operations at the National Hurricane Center in Miami.

Really strong hurricanes can sometimes produce small surge levels while weaker hurricanes — ones like Isaac — can kick up massive surge. For example, in 2004, Hurricane Charley hit Florida as a compact Category 4 storm and produced a surge of only about 7 feet. By comparison, Isaac created storm surge of more than 6 feet at Lake Pontchartrain, according to U.S. Geological Survey sensors. It reached about 12 feet near Braithwaite, a community flooded to its rooftops in Plaquemines Parish.

"It was like scooping up water with a broad shovel rather than a pencil point," he said, comparing Isaac to a more compact storm like Charley.

Furthermore, the storm's size, slow speed and the way it angled into the state "worked together to produce incredibly high surge," said Jamie Rhome, a surge specialist with the National Hurricane Center.

"The water piled up," he said.

Other scientists agreed it was unlikely New Orleans' fortified defenses caused flooding in neighboring communities. Instead, numerous factors combined to create ideal flooding conditions. For instance, the storm was virtually stationary for a time and dumped rain far longer than many other tropical systems.

"We started on late Monday fighting this storm and finished on Thursday," said Windell Curole, the head of the South Lafourche levee district south of New Orleans. "That's not a normal storm."

With the storm sitting so long over the coast, wide-open inland lakes became extremely turbulent, with water being sloshed from one side to the other and splashing onto land.

Furthermore, residents along the coast have for years spoken of feeling forgotten in New Orleans' shadow; it's a theme that emerges virtually every time a hurricane causes flooding in southern Louisiana. Vitter said communities outside the metro levee system started worrying about additional flooding as soon as work started on ramping up protection around New Orleans after Katrina hit in 2005 and breached poorly designed levees.

Vitter said he was thankful the Corps was quick in building up the New Orleans area but said it needs to keep its promise to provide protection for outlying communities.

"The problem is now that the main post-Katrina system has been built those other programs are either being canceled outright or being slowed to the normal Corps snail's pace," Vitter said.

The call for more levees is more urgent among residents, too — people like Dawn Brady, who said her 45-year-old home had never flooded until Isaac sent about 4 feet of water into the area.

"My house is raised," Brady said. "I don't understand. This is so overwhelming. It's horrible."

And some say that unusual destruction is what makes the Corps study worthwhile.

"It's definitely possible that any modification to a levee system can have an effect on the region on the whole," said Peter Sheng, a storm surge expert at the University of Florida. "Some areas might be better off, some areas might have more risk."