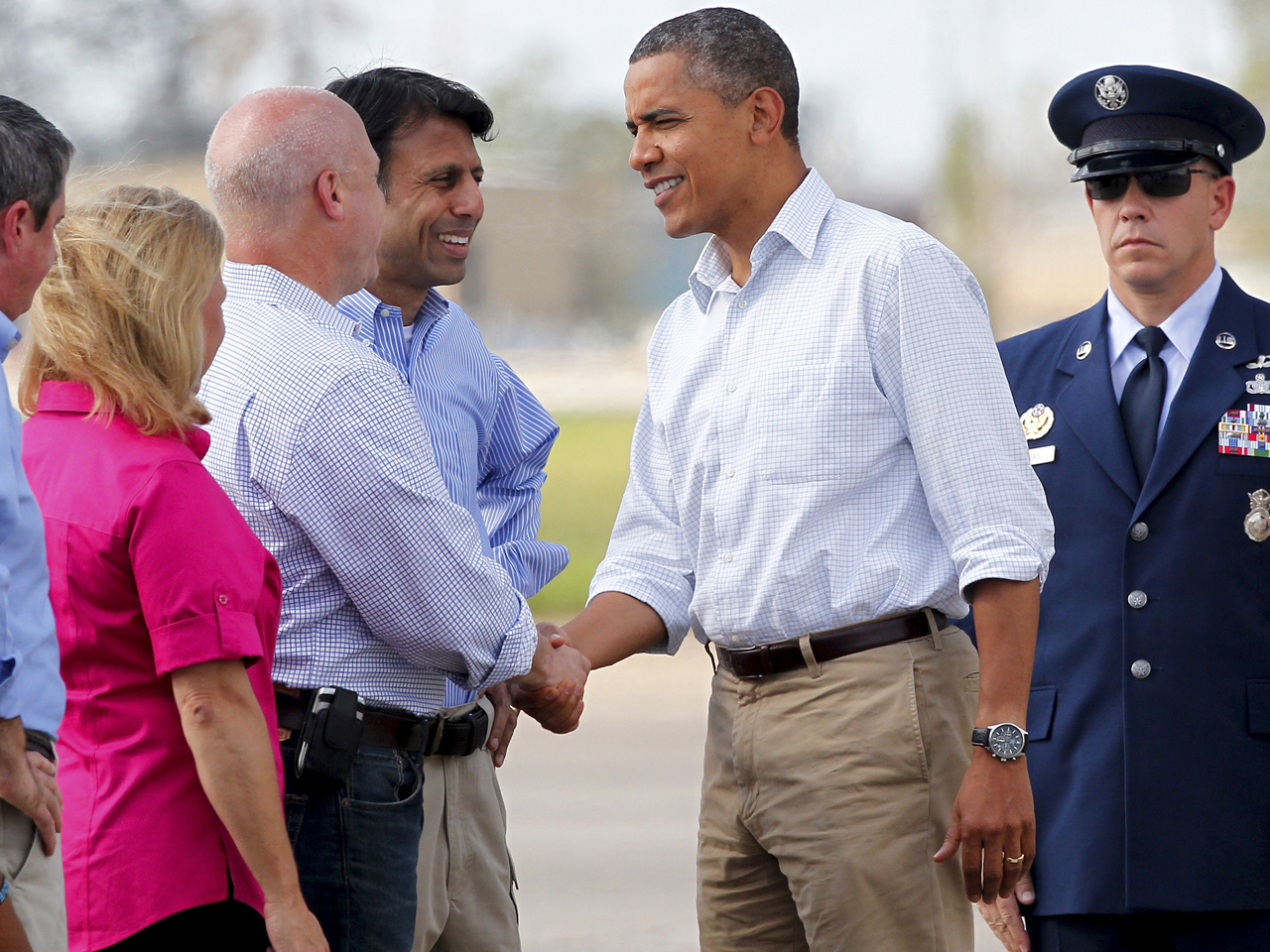 (CBS/AP) NEW ORLEANS - Tens of thousands of customers remained in the dark Monday in Louisiana and Mississippi, nearly a week after Isaac inundated the Gulf Coast with a deluge that still has some low-lying areas under water.

Most of those were in Louisiana, where utilities reported more than 100,000 people without power. Thousands also were without power in Mississippi and Arkansas.

President Barack Obama visited southern Louisiana on Monday, a day ahead of the Democratic National Convention, and walked around storm damage in St. John the Baptist Parish, where subdivisions were soaked in water from Isaac.

"What I've pledged to these folks is we're going to make sure at the federal level we are getting on the case very quickly about figuring out what exactly happened here and what can do to make sure it doesn't happen again and expedite some of the decisions that may need to be made," Obama told reporters after touring the region, 30 miles outside of New Orleans.

Joined by Republican Gov. Bobby Jindal and members of Louisiana's congressional delegation, Obama walked through the Ridgewood neighborhood of brick homes and front yards that were a painful reminder of last week's hurricane. Orderly piles of water-logged debris - bedding, insulation, furniture and toys - filled the yards.

The president shook hands with residents in La Place, where several neighborhoods were inundated by water and some residents were rescued from rooftops by boats.

"Better now," one man shouted back.

In the sticky heat, the president walked from house to house, asking residents about what happened and posing for photos. There was debris but no signs of lingering water.

"We're here to help," the president said at another home.

Obama praised the coordination of federal, state and local officials and pointed out that his administration issued disaster declarations well in advance to ensure officials "weren't behind the eight ball." In highlighting the work, Obama was drawing a contrast with President George W. Bush's widely criticized response to Hurricane Katrina seven years ago.

In St. John the Baptist Parish, residents spent the Labor Day holiday dragging waterlogged carpet and furniture to the curb and using bleach and water to clean and hopefully prevent mold.

St. John the Baptist Parish residents Calvin and Constance Woods told CBS News correspondent Manuel Bojorquez their home had taken in five feet of water. The floors are soaked, the roof is ruined -- even the doors are swollen shut. (At left, watch Bojorquez's report for CBS Evening News on Hurricane Isaac recovery.)

The Woods lost their home to Katrina and now Isaac has done the same. There is a reason they waited until Monday to see the damage: Woods, the pastor at Liberty Baptist Church in New Orleans' Ninth Ward, felt his congregation needed his Sunday service.

"That was more important," Woods said.

LaPlace resident Barbara Melton swept mud and debris from her home, which was at one point under two 2 feet of water. The garbage, debris and standing water - combined with heat reaching the 90s Fahrenheit - created a terrible stench.

"It's hot, it stinks, but I'm trying to get all this mud and stuff out of my house," she said.

Melton was grateful for the president's visit.

"I think it's awesome to have a president that cares and wants to come out and see what he can do," Melton, 60, said.

A few houses away, Ed Powell said Isaac was enough to make him question whether to stay.

"I know Louisiana's a gambling state, but we don't want to gamble in this method because when you lose this way, you lose a lot."

Powell said even if Obama comes up with a plan or solution to the flooding problem in his area, time is not on the residents' side.

More than 2,800 people were at shelters in Louisiana, down from around 4,000. State officials were uncertain how many people would eventually need longer-term temporary housing. Kevin Davis, head of the state's emergency office, said housing would likely include hotels at first, then rental homes as close as possible to their damaged property.

Progress was evident in many places, though lingering flooding remained a problem in low-lying areas.

Crews in the town of Lafitte intentionally breached a levee Sunday night in an effort to help flooding there subside, Jefferson Parish Councilman Chris Roberts told The Times-Picayune newspaper.

Much of Plaquemines Parish, a vulnerable finger of land that juts into the Gulf of Mexico, remained under as much as five feet of water, Parish President Billy Nungesser said. The Category 1 hurricane walloped the parish, and for many, the damage was worse than that from Hurricane Katrina in 2005.