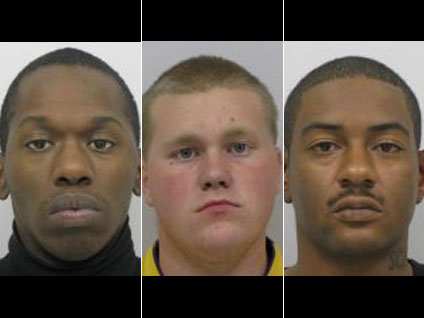 COLORADO SPRINGS, Colo. (CBS/KCNC) Sounds like this heist was dreamed up with a little help from Mary Jane.

Three active duty soldiers at Fort Carson in Colorado Springs are being held on $10,000 bond after they allegedly tried to rob a marijuana dispensary but got locked inside, and it was all caught on tape.

Police say Ramone Hollins, Cory Young and Darius Thomas broke into Rocky Road Remedies just after 2 a.m. on Saturday. They reportedly broke the lock on the back door but what they didn't know was that the door locks automatically from the inside.

But that wasn't the end of their troubles. At the same time, police officers were next door responding to an unrelated call when they noticed the burglars inside, according to CBS affiliate KCNC.

Authorities say that the surveillance video shows Hollins, Young and Thomas, dressed in black, trying to break the front door of the dispensary once they realize the back door has locked them in. But the door and the windows are reinforced with metal bars, so they try to go back the way they came only to find that door locked, too.

At one point one of the alleged burglars decides to dive through a small interior sliding glass window instead of walking through the open door right next to it.

"It's definitely humorous because in the videotape you see them running back and forth, back and forth, kind of realizing that they're trapped and they are going to get caught," dispensary owner Renze Waddington told KCNC.

The three men were finally able to break free of the marijuana labyrinth and were being held in the El Paso County Jail, facing charges of second degree burglary.