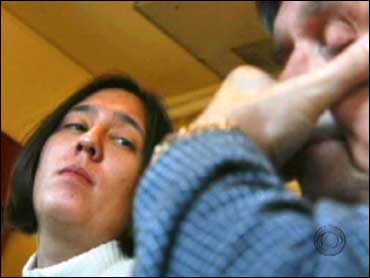 CBS News broke the story of the epidemic of suicides and attempted suicides among veterans in November.

New internal Army figures illustrate how serious the problem has become among active military servicemembers. It's part of an exclusive report that will appear in Thursday's Washington Post and on washingtonpost.com.

CBS News national security correspondent David Martin has one soldier's harrowing story - and that of her struggle to get help.


Lt. Elizabeth Whiteside was admitted to the psychiatric lockdown ward at Walter Reed Army Medical center after trying to kill herself earlier this week, Martin reports.

"She took two weeks worth of medicines - four different medications... and she took them all at once," her father, Tom Whiteside, said.

He holds a note she left, reading in part: "I'm very disappointed with the Army."

He says her suicide attempt was brought on by the stress of waiting to find out if she would be court-martialed for an earlier attempt to kill herself.

"It became sodistressing to my daughter, it just drove her over the edge and, um, she attempted to take her own life," Whiteside said.

Lt. Whiteside is the latest in the epidemic of attempted suicides and self-injuries by soldiers.

According to internal Army documents, the number has gone from less than 500 in 2002 to more than 2,000 last year. The number of actual suicides is also climbing, and the Army's suicide rate is higher than at any time in the past 25 years.

But Lt. Elizabeth Whiteside is more than just a number. Hers is a shocking story of how the Army dealt with one case of mental illness.

She first tried to kill herself a year ago while serving in Iraq.

"I had a psychotic break and shot myself," she said. "I also ... discharged my weapon twice and put two bullets in the ceiling."

She told her story to Washington Post reporter Dana Priest, who was the first to report that the Army wanted to courtmarshall Whiteside for brandishing her weapon.

Said Priest: "Her commander said in the charges that he brought, 'I realize that people have said that you were mentally ill, but this is an excuse for your actions.'"

The hearing officer dismissed the charges, but that ruling had to be approved up the chain of command, and the Whitesides were left dangling.

"I want them to make a decision," Tom Whiteside said. "They have driven my daughter into suicide. I would like to get this issue resolved."

Minutes after the interview ended, Whiteside received a call telling him the charges against his daughter have been dropped."

"But what a God damn shame that we had to go to this extent," he said into the telephone.

He left immediately for the hospital to give his daughter the news - although he won't be able to see her because she's still in lockdown.