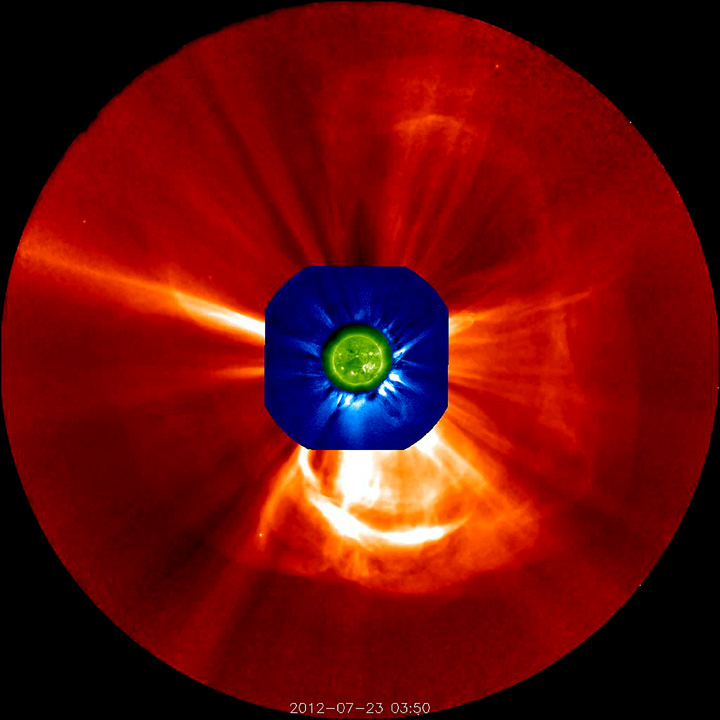 "If it had hit, we would still be picking up the pieces," Daniel Baker of the University of Colorado said in a statement released by NASA this week.

The solar storm, which happened on July 23, 2012, was the strongest one ever recorded -- more than twice as powerful as any solar storm recorded in the last 15o years. Scientists say it was actually two storms that combined their energy into one superstorm and followed the track of another storm days earlier.

It was a close call for Earth -- the solar storm tore through Earth orbit only a week after our planet had passed by that segment of space. If we had been in its path, NASA says it would have had a "catastrophic effect," blowing out electrical systems, GPS, radio systems and other technology worldwide, plunging billions of people into a blackout that could take years to repair.

A study by the National Academy of Sciences estimates that the total economic impact of such a disaster could exceed $2 trillion.

Baker told NASA, "I have come away from our recent studies more convinced than ever that Earth and its inhabitants were incredibly fortunate that the 2012 eruption happened when it did ... If the eruption had occurred only one week earlier, Earth would have been in the line of fire."

Solar storms do not pose a physical threat to people or animals or plants, just to our way of life. The real danger is a disruption of our electrical grid, satellite systems and use of modern electronics devices.

Baker and his colleagues published a study of the event in the December 2013 issue of the journal Space Weather. The storm cloud was recorded by NASA's sun-orbiting STEREO-A spacecraft.

In the February 2014 edition of Space Weather, physicist Pete Riley of Predictive Science Inc. warned that the odds of a serious geomagnetic storm hitting Earth in the next ten years was 12 percent. Riley told NASA, "Initially, I was quite surprised that the odds were so high, but the statistics appear to be correct. It is a sobering figure."

Scientists have been tracking space weather, including solar breezes and storms, for at least 150 years.

Sunspots and solar flares lead a few hours later to a bright display of the Northern Lights. A solar wind bathes Earth all the time with a gentle, steady stream of particles. But solar storms, like analogous Earth storms, are more violent. The sun is on an 11 year solar storm cycle, with a peak for this cycle reached in 2013.

Storms have two components: large areas of violent activity called coronal mass ejections (CMEs) that are somewhat analogous to hurricanes; and powerful, focused high-speed solar flares you might think of as the solar equivalent of a tornado. Both send large numbers of high energy particles shooting away from the sun.

The Earth is surrounded by its own large magnetic field, the same field that makes a compass needle point north. Earth 's magnetic field deflects solar particles to a certain extent, but the strength of the Earth's magnetic field is decreasing, affording us less protection decade by decade.

Scientists calculate the force of a solar storm on the Earth in units called nanoTeslas (nT), with small, harmless storms hitting values near -50 nT. Prior to the July 2012 event, the most powerful known solar storm, in 1859, was estimated at -800 nT to -1750 nT, although modern measurement techniques were not available then. It knocked out telegraph machines across America.

The worst geomagnetic storm since then knocked out power across Quebec in March 1989 and registered at -600 nT. The July 2012 event would have delivered a whopping -1200 nT.

Geomagnetic storms of that magnitude could cause widespread electrical blackouts. Transformers would be destroyed if they absorbed large, sustained blasts of solar radiation that pushed them to temperatures for which they were not designed. Older transformers and those in urban areas worry experts the most since they are most sensitive to electromagnetic overloads and are hardest to replace.

Any satellite in the path of a strong solar flare could be damaged. A less serious storm harmed a pair of Canadian communications satellites in 1994; it took 6 months to repair the damage.

How do we prepare?

The U.S. National Academy of Sciences convened a workshop in 2008 to address the question: "Are our institutions prepared to cope with the effects of a 'space weather Katrina,' a rare, but according to the historical record, not inconceivable eventuality?"

By that point, many industries were already thinking about the impact of adverse space weather on their assets and operations. Since then, more technologies and procedures have been implemented. For example, the FAA can route flights away from the poles during a solar storm, and electrical grid managers can ratchet down power flow through vulnerable equipment.

The NASA spacecraft STEREO-A was able to withstand a full blast of solar radiation near the sun without harm. But not all satellites currently in use would survive. And STEREO will need to take a planned breather from its daily detailed forecasts as it moves into an unfavorable alignment with the sun this year. NASA notes there are other instruments to track solar activity, and flares should be at their low point in the solar cycle. Nonetheless, this year space weather will not be tracked in as much detail as it had been since 2006 when the pair of sun observing satellites STEREO-A and STEREO-B were launched.

But at least for the next few days, we don't have to worry. The space weather prediction is quiet, with a slight chance of a few small flares.