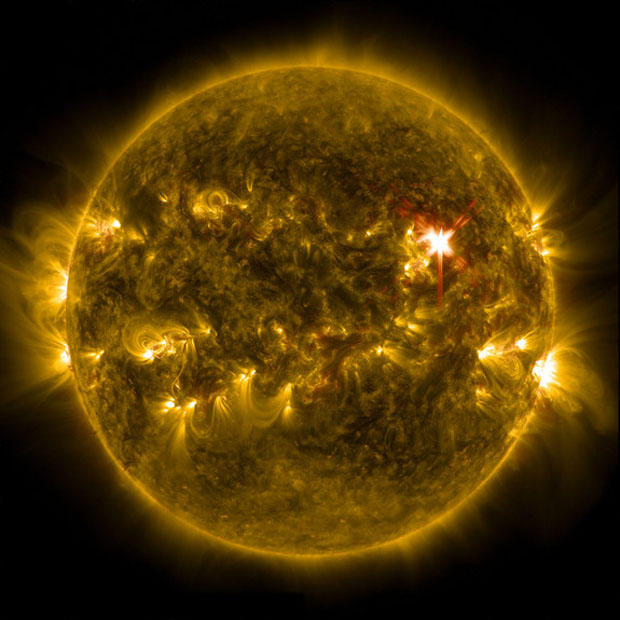 The brief X1-class flare erupted from the now decaying sunspot AR2017 at 1:48 p.m. EDT (1748 GMT) on Saturday, according to a report from the NOAA-led Space Weather Prediction Center. Although AR2017 is dissipating, it may still produce more solar flares in the coming days, the report stated. NASA's Solar Dynamics Observatory caught sight of the solar blast, capturing video of the huge solar flare.

"Solar flares are powerful bursts of radiation," Karen Fox of NASA's Goddard Space Flight Center wrote in a statement. "Harmful radiation from a flare cannot pass through Earth's atmosphere to physically affect humans on the ground, however -- when intense enough -- they can disturb the atmosphere in the layer where GPS and communications signals travel." [Biggest Solar Flares of 2014: Sun Storm Photos]

According to NOAA's update, the weekend solar flare and several recent eruptions of super-hot solar plasma (called a coronal mass ejections) could trigger a minor geomagnetic storm on April 2. The storm may amplify Earth's northern lights displays, astronomer Tony Phillips wrote on Spaceweather.com. The northern and southern lights are created when charged particles from the sun come into contact with particles in Earth's atmosphere. The particles from the sun are drawn to the Earth's poles by the planet's magnetic field, creating the dancing lights in northern and southern latitudes.

When pointed directly at Earth, powerful solar flares can pose a threat to astronauts, satellites and other spacecraft in orbit.

The sun is in an active phase of its 11-year solar cycle. The star shot off an X-class flare at the beginning of January and another powerful X-class solar flare in February.