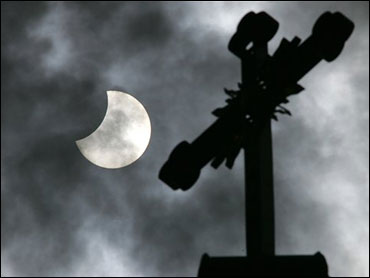 An enormous swathe of western Siberian was submerged in darkness Friday afternoon as the moon completely blocked out the sun, enrapturing huge crowds of Russians and foreign tourists.

There, forecasts of cloudy skies turned out to be wrong, and tens of thousands of people who had flocked to the center of town were able to observe the rare total eclipse of the sun - which lasted two minutes, 23 seconds - in its full beauty.

Crowds wearing protective eye wear cheered and whistled once the moon completely blocked out the sun and day became night.

Lucas Heinrich, a physics student from Berlin who traveled to Novosibirsk with classmates, described it as "unbelievable."

"It became cold and dark, and suddenly it was light again. I am very happy - it was worth the trip," Heinrich said.

The NTV news channel reported that more than 10,000 foreign tourists arrived in Novosibirsk, the largest city under the eclipse's path, to watch it.

Friday's eclipse began in Arctic Canada, and then passed over Greenland, western Siberia, Mongolia and China. The first Russians to witness the eclipse were on the Arctic island of Spitzbergen north of Norway.

In Novosibirsk, the airport announced that it turned on nighttime landing lights to provide illumination and handled 14 regular flights and departures during the partial and total darkness of the eclipse, which lasted more than two hours.

Cloudy weather in other parts of Western Siberia prevented many from enjoying the stunning spectacle.

Residents of Nadym, a small town not far from the Arctic Circle, were treated to rain and full cloud cover at the moment of total eclipse. Still, the weather didn't stop many from enjoying the festive mood and throwing barbecue parties.

It was not immediately clear how many people suffered eye injuries, despite repeated warnings to wear protective glasses.

In Moscow, there was a partial eclipse - half the sun was blocked - but thick cloud cover prevented Muscovites from enjoying the view.

People have been recording solar eclipses for perhaps 4,000 years, and they typically inspire a combination of dread, fascination and awe - especially for those standing in the path of a total eclipse.

News agencies are reporting that Russia will next see a solar eclipse in 22 years.

According to NASA, the world's next total eclipse is expected July 22, 2009, starting in India and moving across Nepal, Bangladesh, Bhutan, Myanmar and China and over the Pacific Ocean.

Meanwhile, millions of Chinese along the ancient Silk Road gathered to gaze at the eclipse, an event traditionally fraught with superstitious meaning coming one week before the start of the Beijing Olympics.

China's carefully planned Olympics year has been shaken over and over by natural disasters. Freak snowstorms. The deadliest earthquake in a generation. Flooding. A massive algae bloom at the Olympic sailing site.

Eclipses were seen in imperial China as ominous occurrences, but Friday's was welcomed - a sign of how the desire for a successful games is in some cases, literally, turning day to night.

"These days, we don't think it's bad or lucky, it's just natural," said Joy Yang, who joined hundreds of people on the massive stone city wall in the ancient capital and Silk Road terminus now called Xi'an. The crowd broke into shouts and cheers during the total eclipse - China's first of this century - which has been christened the "Olympics eclipse" by state media.

The local newspaper instructed residents to protect their eyes by looking at the eclipse through dark film. Yang, like others, gazed at the sun through X-rays of teeth and other body parts, tearing large pieces of film into smaller bits to share with others.

Thousands of tourists also gathered in different areas of the far-western desert in Xinjiang in search of the best view, according to state media.

Despite the ruling Communist Party's emphasis on scientific thinking, China still has its superstitions. The date and time of the Olympics' opening ceremony on Aug. 8 are stuffed with as many eights as possible because "eight" in Chinese sounds like "fortune."

But adopting Friday's solar eclipse as a good sign meant stripping away the ancient superstition about it being the unluckiest event in the sky.

When eclipses happened, emperors were blamed and had to apologize for angering the heavens.

Being able to predict solar eclipses and show control over the skies became so political that some eclipse reports apparently were manipulated, said John B. Henderson, a history professor at Louisiana State University who has written about Chinese cosmology.

"Eclipses were reported where none took place, in areas of political or bureaucratic strife," Henderson said. "It may have been a means of voicing dissent."

The urge to seek links between the Olympics and natural phenomena such as the eclipse is understandable, if not exactly rational, said Jiang Xiaoyuan, a social sciences professor at Shanghai's Jiaotong University who has written about astronomy research and patriotism in China.

"We'd already known about this eclipse many years before we got the right to host the Olympics, so how can we explain this is retribution?" Jiang said.

In the world of feng shui and astrology, the eclipse will bring fluctuations, but it's more about the stock market and people's moods, said Raymond Lo, a feng shui master in Hong Kong.

Just in case, hanging a metal wind chime in the south of the house can help, Lo said.