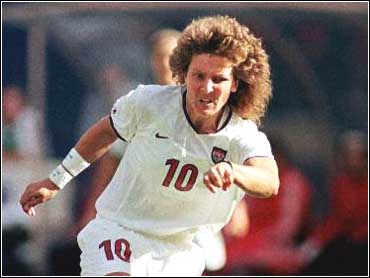 Ice packs were as much a part of Michelle Akers' uniform as her soccer cleats. While other players guzzled Gatorade, she took IVs.

Somehow, she always played through the pain. Despite chronic fatigue syndrome, broken bones and dozens of operations, Akers was one of the world's top players for 15 years, leading the United States to two World Cups and an Olympic gold.

But after reinjuring her shoulder earlier this month, Akers realized her body had given all it could. She said Thursday she's retiring from international competition, and won't play at the Sydney Olympics next month.

"I finally said to myself, `This is insane,'" Akers said. "I was battling at my absolute gut level to just get through the day, and finally, the last straw was that I reinjured the shoulder. I just said, enough is enough. I am no good to myself like this, and I am certainly no good to my team."

She still plans to play for the new WUSA franchise in Orlando, which starts play next April. There was no immediate word on her replacement with the Olympic team.

Akers missed almost all of the tuneup matches for the Sydney Games while recovering from April shoulder surgery. She'd dislocated the shoulder in September 1998, reinjured it giving high-fives to fans during last summer's World Cup and dislocated it again in March while training.

On Aug. 15, she jammed the shoulder in a match against Russia.

"It is a rare thing for someone with her injuries and illnesses to battle as hard and long as she has to stay on the best women's soccer team in the world," said Dr. Mark Adams, the national team physician. "However, this combination of problems and setbacks makes it very difficult for Michelle to play to the level that she expects of herself. She's a warrior in every sense of the word, but it became clear to the team medical staff and to Michelle that this was the time to step back."

Akers, 34, retires as the all-time leading scorer of the Women's World Cup (12 goals), and as one of only four players in history with 100 or more career goals. With 105 goals, 37 assists and 247 total points, she trails only Mia Hamm in all-time scoring for the U.S. national team.

She has made 153 appearances for the United States, and holds U.S. records for most goals in a game (five), most goals and points in a calendar year (39 goals in 1991) and most consecutive games with a goal (nine).

"What she has been able to achieve over the last five years has been a miracle," said April Heinrichs, coach of the national team. "I'm sure that her team, like myself, supports her decision. It is always tough to make that decision to retire and even tougher with the Olympics just three weeks away.

"Michelle has carried the flag for this country and her departure is the equivalent of a John Elway retiring. We will miss Michelle's heart, soul and courage."

At 5-foot-10 and with a flowng mane of curls, Akers was the face of women's soccer before Hamm and Brandi Chastain. She's an original member of the U.S. women's national team, scoring her first goal in the team's second game, a 2-2 tie with Denmark on Aug. 21, 1985.

In the first Women's World Cup in 1991, she scored 10 goals and became the first American to win a Golden Boot, soccer's MVP award. She was the first female player with a shoe contract.

"Up to this point, I haven't had the opportunity to look back over my career," Akers said. "But I have to say all the trophies and championships are a far second to all the incredible people I have played along side and worked with over the years. ... They are a big part of the reason I have lasted 15 years as a national team player."

As good as she was on the field, Akers' perseverance over her physical problems was even more impressive. For most of her career she has had chronic fatigue syndrome, a disease so debilitating it leaves many without the energy to get out of bed.

She's had more than a dozen knee operations and countless concussions. In a tuneup for the World Cup in February 1999, she fractured her cheekbone and two other bones near her left eye when she collided with another player.

In the World Cup final last summer, she played more than 90 minutes before leaving the game with heat exhaustion and a slight concussion after colliding with a Chinese player. She needed an IV and said she was so woozy that she hardly remembered the medals ceremony.

"After winning the gold medal in 1996, I promised myself to never again play in the condition I was in during those Olympic games," Akers said. "Since then, retirement has been a big issue with me and the decision to continue on with the national team has always been a prayerful and careful one. ...

"After battling back from a messed up shoulder and making the Olympic team, I found myself at the end physically and mentally with a body ready for a MASH unit. It has been a hard-fought year, and the decision not go to Sydney was just as agonizing, but I have huge peace in knowing I fought to the very end and have nothing else to give."