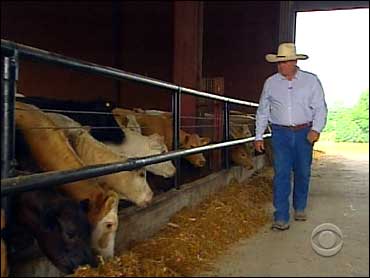 Steve Foglesong raises 4,000 head of cattle at the Black Gold Ranch in Illinois.

David Hale helps mind the chickens on his family's farm in Texas.

What do they have in common? Skyrocketing prices for feed, CBS News correspondent Hari Sreenivasan reports.

"This used to be 50 bucks for the full barrel," Hale said, pointing to a barrel of chicken feed.

"All these cattle will eat 40 lbs. of feed a day and it went from two cents to nine cents a pound for that feed, that's a big big difference," Foglesong said.

Corn prices are at the highest levels they've ever been; and meat farmers are hit especially hard.

"Chicken feed is supposed to be an idiom for 'cheap,' right?" Hale said.

But not any more. The mountains of corn it takes to feed Hale's chickens and Foglesong's cows are getting more expensive, because of increased domestic demand from ethanol plants, higher overseas demand thanks to a weak dollar, increased transportation costs - and let's not forget tight supplies.

The recent floods in the Midwest wiped out an estimated two million acres of corn and soybean crops.

"The only thing a guy's got the opportunity to do is cut back on the number of cows he's carryin', because he doesn't have any feed for 'em," Foglesong said. "So those cows go to market."

And that means sticker shock at the grocery stores, as farmers fold under pressure of high feed prices.

"That reduction in supply, yes, would result in an increase in demand and that in effect would raise prices at the grocery store level," said Agricultural Economist Mark Welch.

Farmers say they have to pass the costs on to consumers in order to survive.

"You get to the point where there's just no where else to go, you've burned what you've got and the only option is to cease doing business," Foglesong said.

As they try to make ends meet, farmers all over the country hope you won't chicken away from those higher prices.