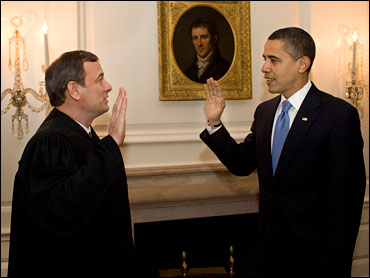 When Chief Justice of the United States John G. Roberts, Jr. was summoned to the White House Wednesday evening to take his mulligan on swearing in the new president it was both a smart and symbolic gesture.

It was symbolic because President Barack Obama was already "President Obama" by the time Chief Justice Roberts finally and "faithfully" got his constitutional text sorta right.

The 20th Amendment, ratified in 1933 to shorten the gulf between presidential elections (in November) and the old transfer date (March), clearly states that a new term of office for a new president begins at noon on January 20th.

Since President Obama "won" that Electoral College vote back in December, he was legally and constitutionally and for all other purposes the president this past Tuesday even before he and Roberts did their Abbott and Costello routine.

And the second swearing-in was also preemptive, and in my view very wise, because it stopped in vitro any chance for the sorts of idiotic lawsuits that already have plagued Mr. Obama since the days of his campaign. The same obsessive cranks who still believe that the president isn't a U.S. citizen, and who have been challenging the existence and validity of his Hawaiian birth certificate, no doubt would have been lining up at courthouse doors everywhere to file lawsuits challenging President Obama's authority to serve because the Chief Justice mixed up a few words.

Listen To Mr. Obama Retake The Oath Of Office

It doesn't matter that these lawsuits —like the hapless birth certificate lawsuits — would ultimately be rejected by every sentient judge. Their very existence would waste valuable court time and space and keep alive in the conspiratorial corridors of the Internet, as well as on talk radio, the sort of creepy partisan darkness that already has caused enough damage in this country.

The second oath precludes a cottage industry—Obama is illegitimate!—that we all ought to move beyond anyway.

What's encouraging about the entire episode is that this White House, unlike the last White House, moved swiftly and pragmatically to implement a sensible fix to a solvable problem.

There was no stubborn stone-walling. No assertions of executive power. The Obama Administration, and counsel Greg Craig in particular, realized that a few more minutes of the Chief Justice's time would allow everyone to move past a phony "controversy" so that real stories and priorities (like fixing the economy and changing the course of our legal war on terror) would get their due.

Besides, I am sure that both principals are glad about their do-over. You rarely in this world get a second chance to take your first presidential oath.