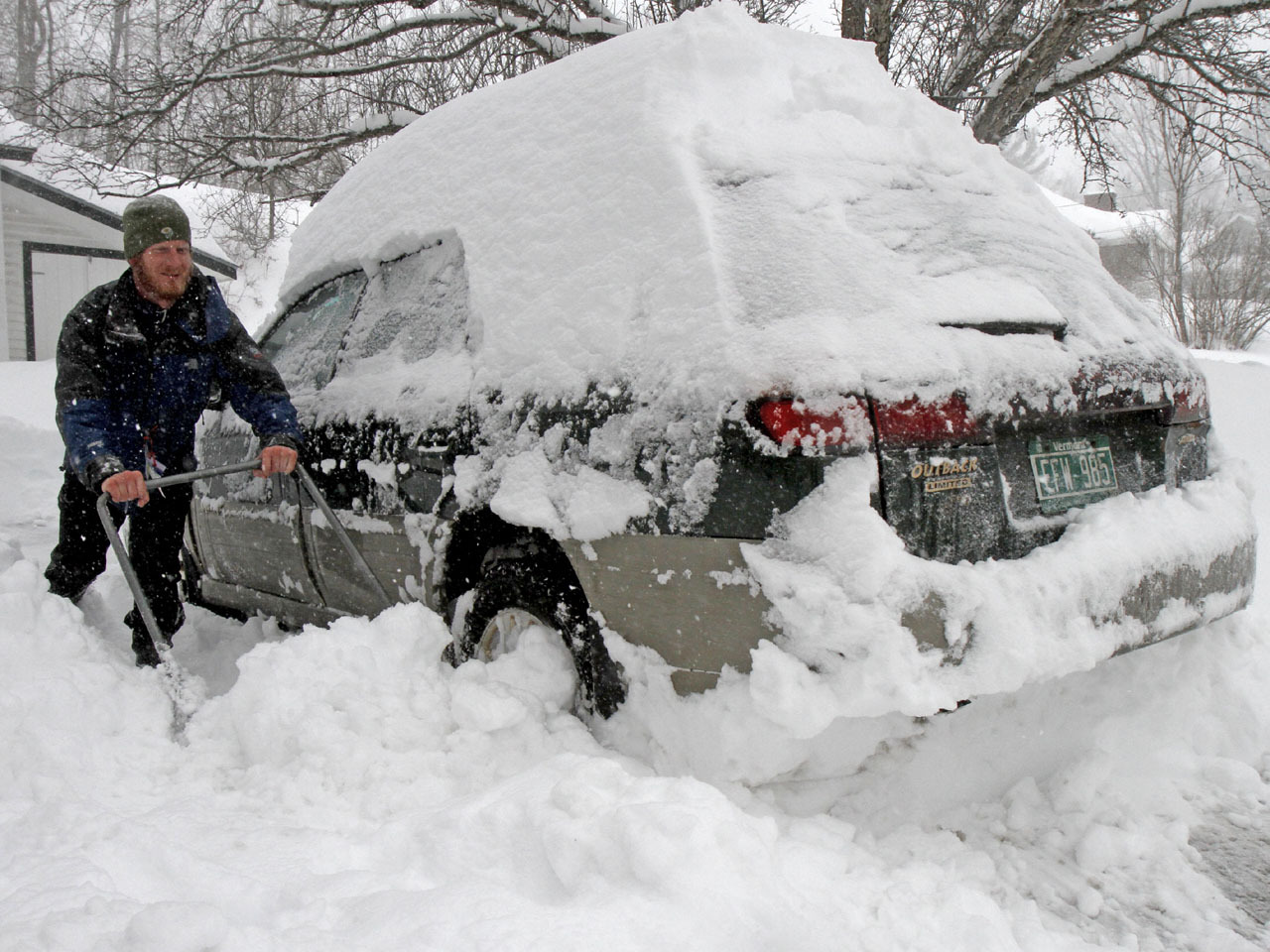 MONTPELIER, Vt. - A fierce winter storm was blanketing northern New England and upstate New York with up to 30 inches of snow Monday, while western Connecticut was deluged with so much rain that parts of homes and cars floated down a swollen river.

As of 1 p.m., 23.3 inches of snow had fallen at Burlington International Airport — the biggest March snowfall there on record and it wasn't finished yet.

At Aubuchon Hardware in downtown Montpelier, the most popular types of snow shovels were sold out, the grass seed was on display and store were readying shelves for more springtime wares.

"Smile, folks — it's coming," Tom Walbridge said of the spring season scheduled to start in just two weeks. Outside told a different story.

The storm helped push the winter of 2010-11 up the record list. Even before the snow stopped, it became the fourth-snowiest winter on record in Burlington, at 121.4 inches, and the storm appeared potent enough to challenge the famous Valentine's Day blitz in 2007 that dumped 25.7 inches on Burlington, Taber said.

In northern Vermont, drifting and blowing snow caused whiteout conditions with near-zero visibility. A 10-to-12-mile section of Interstate 89 was closed for several hours Monday morning in the Richmond-Williston area.

At midday Sunday, the forecast for the area called for 10 to 20 inches, but the report worsened as the day progressed.

"We had almost a tropical air mass across southern New England that was trying to push north at the same time a polar air mass was trying to push south," said National Weather Service meteorologist Bruce Taber. "It was that battleground that created this intense snowfall."

"Everyone was going to be out plowing today — it was just a matter of how long," Bosma said.

Schools and other public facilities closed across the region. Gov. Peter Shumlin announced that nonessential state employees in all but Vermont's two southernmost counties had the day off.

"We tried going to the library, but it was closed. Then we tried La Brioche" — a popular local bakery — "but it was closed, too." Their next, and last, stop was the supermarket down the street.

Parts of upstate New York are buried under more than 2 feet of heavy snow, with freezing rain, sleet and 30 mph winds added to the mix, closing scores of schools and knocking out power to more than 40,000 customers.

The heaviest snow totals were reported in the Adirondack Mountains, in northeastern New York, and areas east of Syracuse.

More than 50,000 power outages were reported at the storm's peak, most of them in the Albany area but also in central Vermont.

In the southern Vermont town of Baltimore, a utility crew was forced to leave an area that needed downed power lines repaired because more ice-laden trees were coming down around them.

In western Connecticut, heavy rains and melting snow combined to cause major flooding and mudslides. Officials in Shelton reported that parts of two homes and two cars were swept into the Housatonic River. The homes and cars appeared to be unoccupied, officials said.

The river was reported to be nearly 21 feet at the Stevenson Dam, about 10 feet above the flood stage. Further upstream, an ice jam on the river broke in Kent and sent ice chunks and water onto Route 7, which closed in both directions.

In Newport, N.H., firefighters used a boat to rescue an adult and three children as the swollen South Branch of the Sugar River rose around their home.

In northern Maine, where residents are accustomed to some of the nation's heaviest snowfall, rain fell for 18 hours and then turned to sleet and heavy snow. That added to the misery for mushers who departed Saturday morning from Fort Kent on a grueling 250-mile dog sled race.

About half the participants in the Can-Am Crown dropped out, but those who persevered began crossing the finish line Monday, said race marshal George Theriault.