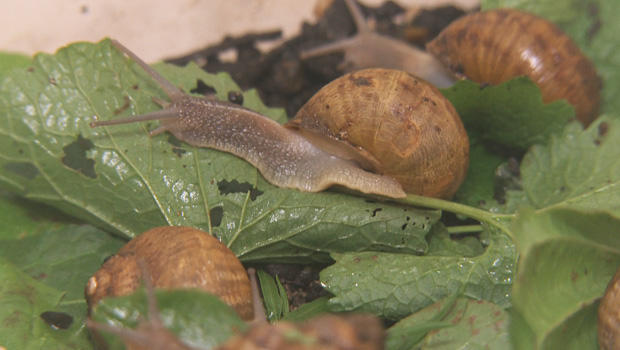 On the North Shore of Long Island in New York, nestled between vineyards growing grapes for pinot noir and a herd of French cows, is a very small farm – only 300 square feet – where Taylor Knapp raises snails.

"We say it's a small farm, but a large snail farm," Knapp said.

In fact, his is the largest snail farm in the country. [To be fair, there are only two.]

"Right now, there's about 50,000 snails in here," he explained to correspondent Mo Rocca.

Knapp calls himself a snail wrangler, and showed Rocca some of his herd, who were hiding: "It's called estivating, when they kind of retract into their shells, and they just kind of hang out on the walls like that."

"Look, that one's moving! They do move!" said Rocca.

Knapp admits that he was not a snail fanatic when he was growing up. "I think the business opportunity of raising something in this country that wasn't being raised at the time was appealing," he said. "The best restaurants in the country, there are snails on their menu. And until we came around, those snails were coming out of a can from Asia or Europe, which is just insane."

Knapp delivers his fresh snails to some of New York City's finest restaurants, like Frenchette, where chef Lee Hanson uses them to make brouillade (a kind of French scrambled eggs) with escargots (escargot is French for snail).

"They're small. They're smaller than maybe some of the snails you've had in restaurants. They're super flavorful," Hanson said. "All those things that Taylor feeds them, you know, the herbs, the wild foraging stuff that he gets."

Yes, these Long Island snails eat well. For snails, that old saying you are what you eat is especially true.

Knapp feeds his snails wild greens picked for them: "Burdock, some dandelion, mustard cress. Little tangerine marigolds, some goldenrod. So, these are all wild plants that you'd find around Long Island to kind of give them this Long Island terroir flavor. We've had Michelin star restaurants ask us to feed them mint, and the snails tasted just like mint."

"Some of them are cute!" said Rocca.

"Yeah, they are. They're good-lookin' animals. We try to avoid the word cute because they become dinner later," he laughed.

Rocca got to hold one: "Where are their ears?"

"No ears on these guys," Knapp said.

"So, this one can't hear me saying how good-looking it is?"

"No, you have to express it in your face."

"And is this one a male or a female?"

"There's no such thing as a lonely snail?" Rocca said.

And though these little creatures do move at a snail's pace, they reproduce very quickly – and they're voracious eaters. "When something is put in front of them to eat, they keep eating it until it's gone," Knapp said. "So, if they were in a crop of vegetables or someone's grapes, for instance, they could do a lot of damage."

And they are uniquely flavorful … with garlic and butter, or in a stew, like babbalucci, or with your eggs on Sunday morning. Bon appétit!