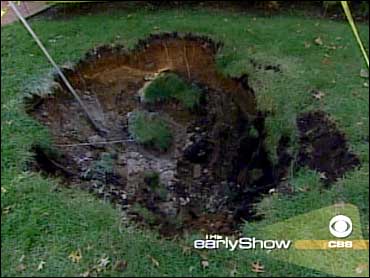 There's danger lurking beneath the yards of tens of millions of homes nationwide, in the form of septic tanks that have been abandoned in favor of sewers.

reports (video)
, the ground above those tanks can collapse without warning, and anyone who happens to be there can fall into the resulting sinkhole and be hurt or even killed.

Brzezinski calls it "one of the scariest stories" she has ever covered, especially because she's a parent.

"Can you imagine," she asks, "your backyard, where your kids play, suddenly collapsing into a deep and deadly sinkhole?"

It has happened and, according to some experts, will happen again in neighborhoods across the United States.

Gerri Carter's 2-year-old son, James, was playing in his backyard in Allentown, N.J., when Carter looked away for a few seconds. James seemingly fell off the face of the earth — into the earth was more like it.

"He just walked over grass … and he walked in the wrong spot, wrong time, and he was gone," Gerri says.

The ground under James had literally collapsed. It turned out he had stepped on top of an abandoned cesspool, a concrete cave hidden under his yard.

Septic tank expert Jim vonMeier says that up to 60 million U.S. homes are vulnerable to having old cesspools cave in without warning.

"A little kid can be walking along, in they go," he says. "And you won't be able to hear them because they're six, eight, 10, 20 feet underground. You won't even know they went down."

He says your home is more likely to have one lurking beneath the surface if it was built before 1970.

"When they built up these neighborhoods," vonMeier says, "they didn't have sewage treatment facilities, so they just used cesspools, which were nothing more than a deep pit you dig in your yard, and that's where you're flushing your toilets to."

As the homes were modernized, the cesspools were abandoned and forgotten. During the years, however, the concrete covers crack and break down, which could lead to a sinkhole in your yard.

Last winter in Stratford, N.J., a 92-year-old woman died after plunging 15 feet into a cesspool behind her house.

That same week in Ingleside, Texas, 2-year-old Maria Carmen Gomez was killed when she fell into an abandoned tank just feet from her front door.

Carter says James was "up to his chin in muck and water" when he fell in.

Knowing she had just seconds to spare, says Carter, she got on her stomach and started screaming.

"I couldn't break the hole anymore, because everything was falling," she says. "All of the debris was falling on his head."

But suddenly, James reached up, far enough that she was able to grab his hand, "And I just pulled him up out of the hole."

Gerri says it was a miracle.

Asked if she feels someone was watching over her, tears came to her eye as she answered. "I do. My mom passed (away) two weeks before."

"So you think she was watching over you?"

Just weeks after James' accident, the Carters had a second cesspool collapse in their backyard. That time, no one fell in.

Experts say it's not uncommon to have more than one potential sinkhole in your yard.

If any are found, Brzezinski says, have the contractor fill them in, so they can't collapse. It costs between $800 and $1,500.