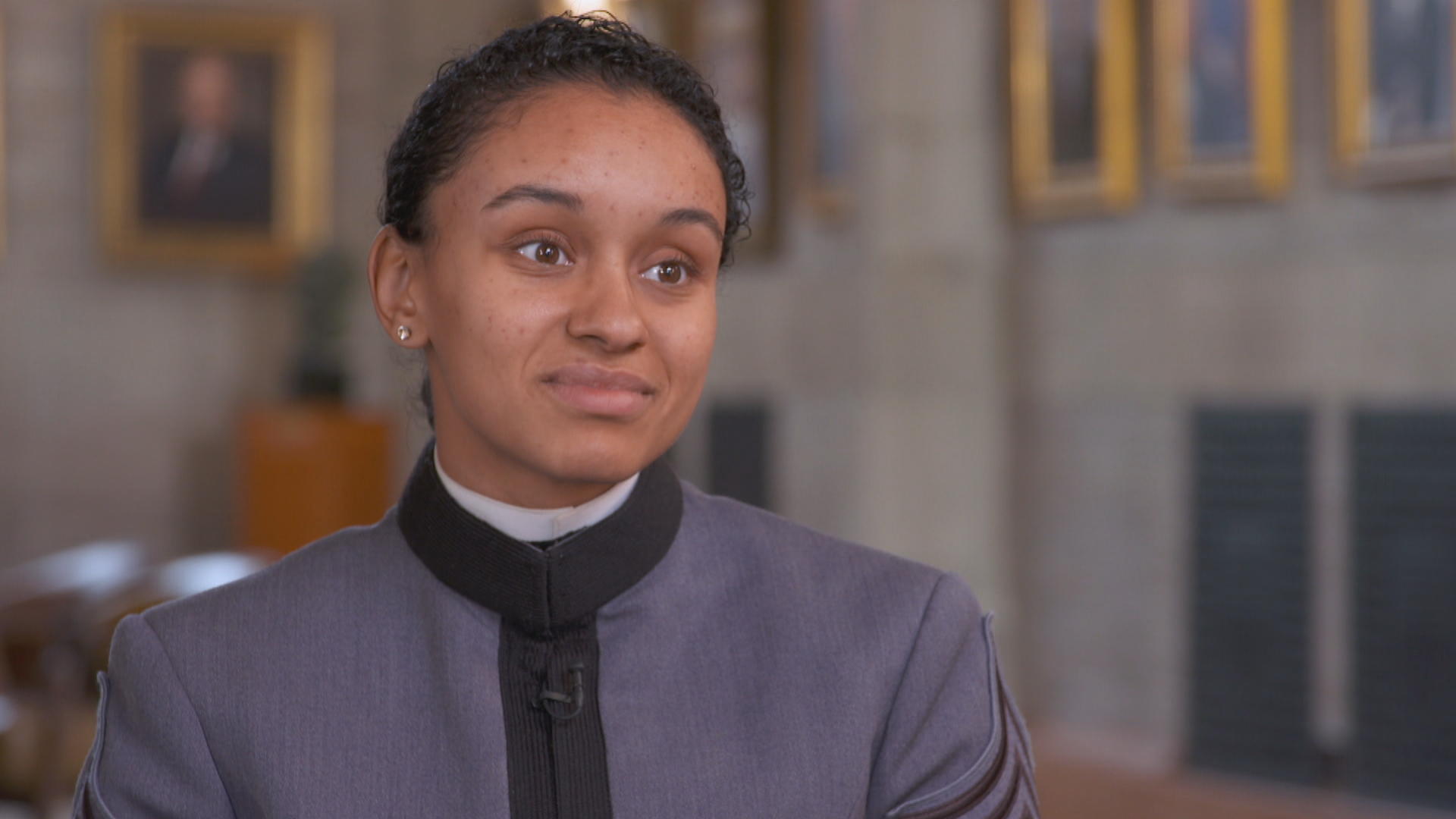 In our new series, Profiles in Service, we introduce you to people who dedicate their lives to helping others.

The United States Military Academy at West Point is America's oldest service academy -- more than 200 years old. But never in its history has it had someone like Simone Askew, reports "CBS This Morning" co-host Norah O'Donnell. At 21 years old, Askew is the first African-American woman selected to serve as first captain of the Corps of Cadets.

She is the highest-ranking cadet at West Point, commanding a brigade of 4,400. It's a role previously held by Gen. Douglas MacArthur, and four-star Army generals who currently command forces in South Korea and Afghanistan.

"My focus now is really to be the best first captain I can be regardless of gender or race, and that when the first class graduates in May… I'm remembered as a good leader and not necessarily as a good African-American female leader," Askew told O'Donnell.

Yet, gender and race do set her apart. As the child of a white mom and a black dad, Askew said she often felt excluded.

"It forces me, at a young age, to be OK with my own sense of identity. So in all senses, it was a positive thing," Askew said.

At West Point, 22 percent of cadets are women and less than four percent are black women.

"Seeing someone at least at the surface who you can relate to provides a motivation," Askew said.

"It makes everything that you do, that you endure worth it," Locke said.

In 1980, Locke was one of the first two African-American women to graduate from the academy.

It's a dedication to service Askew learned from her mom.

"What does service mean to you?" O'Donnell asked.

"Definitely giving when there is not a foreseeable benefit – or beneficial outcome to yourself," Askew replied.

"So when did that idea of selfless service come to you?"

"It was definitely the example of my mom," Askew responded.

"That is service to a community that she doesn't receive benefit from, or at least, initially does not have any connection to," Askew said. "Seeing her do that and be committed and devoted to that was something I knew I wanted to do when I grew up just to be exactly like her."

"And how much do you credit your mother with where you are today?" O'Donnell asked.

"About 110 percent of it. I mean, every, every single ounce of it. My mom kept me busy. And she'll tell you it was to keep me away from boys and out of trouble. And it worked," Askew said with a laugh.

She credits a big volleyball tournament in high school with helping her learn what she calls one of the most important qualities of leadership: temperament.

"It was down to maybe the last game point. And I freaked out," Askew said. "I didn't feel comfortable. And we lost the game. And I credited a lot of that to my inability to remain calm and that lesson alone among with many others taught me a lot about what I valued in leaders and also the type of leader I wanted to be."

Now, Askew says she is trying to be a leader her fellow cadets deserve.

"After listening to you, I keep thinking about how temperament leads to performance leads to success," O'Donnell remarked.

"It's so important because it sets a climate in your own head but also in the atmosphere around you," Askew observed. "Making sure you make other people feel comfortable is really the key to success in a lot of what we do in the Army, 'cause it is a people business."

Askew was also one of 32 American students awarded the prestigious Rhodes Scholarship this year to continue her studies at the University of Oxford in England. After that? She says she'll stay in the military as long it will have her.