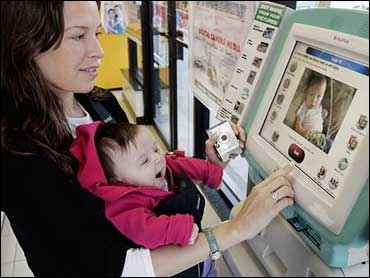 In the brave new digital-photography age, cherished pictures of pets, landscapes and loved ones are showing up in unusual places — on swimming pool tiles, furniture and even tombstones.

As digital cameras find their way into more than half of America's homes, one old habit has taken hold again: Most people now send their digital pictures out to be developed rather than print them at home. And they don't just order 4-by-6-inch snapshots at the corner pharmacy.

In the lucrative print business, the number of digital and film images converted into conventional prints has been slipping since 2000 and could dip another 5 percent to 25 billion this year, according to Photo Marketing Association International, a trade group whose annual convention opens Feb. 26 in Orlando, Fla.

Overall revenues are rising, however, as alternatives blossom, from putting computer reproductions of images onto posters, postage stamps and postcards to T-shirts, chairs, wallpaper and bronze plaques.

"Images are no longer good enough in a frame on the wall," said Mitch Robison, 46, whose Sierra Custom Design studio in Bishop, Calif., transfers photos onto ceramic tile to add sparkle to Jacuzzi rooms, restaurant murals, tabletops and fireplace mantels.

"It's functional art versus just decorative art. People like to touch it. It's a little more personal."

In addition, putting images on wood, stone, plastic and metal as well as paper of all kinds — birthday cards, calendars and storytelling photo books that "people actually use instead of just keeping around for storage or display" — brought in an extra $1.5 billion, Delis guessed.

The digital revolution has sidelined film, and the reverberations are being felt worldwide. Film behemoths led by Rochester-based Eastman Kodak Co. are racing to transform themselves into catchall digital players but relying more than ever on high-margin inks, chemicals and paper that go into making prints.

To get there, they must battle head-on with consumer electronics heavyweights like Sony Corp. and Hewlett-Packard Co. in the rapidly evolving digital camera market. The latest camera models, even the cheapest ones, have improved to the point where picture quality is mostly taken for granted — sending the crowd looking for extras beyond megapixel resolution and liquid-crystal-display screens.

"We're at an inflection point where the easy stuff, putting cameras in people's hands, is winding down," said Chris Chute of IDC, a market research firm in suburban Boston. "Now it's going to take skill, innovation, a lot of creativity, to make money off of all these cameras. It may mean printing personalized coffee-table books, managing your own photo archive online, finding new ways to share pictures on displays."

In under a decade, digital cameras have landed in just over half of the nation's 110 million households. That penetration could reach 55 percent to 60 percent this year and top out at around 70 percent by 2009, analysts say.

The more ubiquitous digital technology becomes, the more likely that old printing routines will be resurrected — and surprising new ones will emerge, Delis said.

In the United States, prints ordered from retailers and Web sites or made at home fell from a peak of 30.3 billion in 2000 to about 26.3 billion in 2005. But that downward path should bottom out in 2007 and begin ascending again in 2008 as the bulk of shutterbugs shift over from film cameras, Delis predicted.

Online photo services, which have been whittled down to a handful of big players, printed about 1 billion images, or 13 percent of the market. And digital orders at retailers, who look likely to re-emerge soon as the kings of printing, jumped to 3 billion prints from 1.9 billion in 2004.

Kodak, which has nearly 75,000 photo kiosks installed at retail businesses worldwide, is bringing in a more versatile film-and-digital kiosk system this spring that can handle up to 900 prints an hour.

"Retail is actually the fastest growing segment of digital printing right now," said Nicki Zongrone, Kodak's general manager for kiosk systems and services. "Early adopters were more techno-savvy, spent a lot of times fiddling with images, printing some but not all of them. As that mainstream consumer has moved to a digital camera, they want to be able to get their high-quality prints as easily as they've been used to."

Propelled by price battles among retailers led by Wal-Mart Stores Inc. and Costco Inc. and online photo-storage sites like Snapfish.com and Shutterfly.com, prints from digital cameras could swell to 10.9 billion this year and outnumber prints from film cameras by 2007.

The average price for a digital print has dipped to 17 cents online and 21 cents in retail outlets, Delis said, and some online services offer a stash of free prints for registering as an incentive.

While often a good deal more expensive, images reproduced by customized-photo specialists such as Zazzle.com, Photopetgifts.com and Matthewsbronze.com are generating a buzz.

Matthews International Corp., a casket, memorial and cremation-equipment maker, started a business in September that turns favorite photos of departed relatives into cast-bronze plaques. A grave might simply be adorned with someone's face or a fond scene of them playing golf or fishing or surrounded by family, said Dave Hewitt, president of the Pittsburgh company's bronze division.

"People want to be able to look back and remember that person, the things they enjoyed doing when they were alive," Hewitt said.
By Ben Dobbin