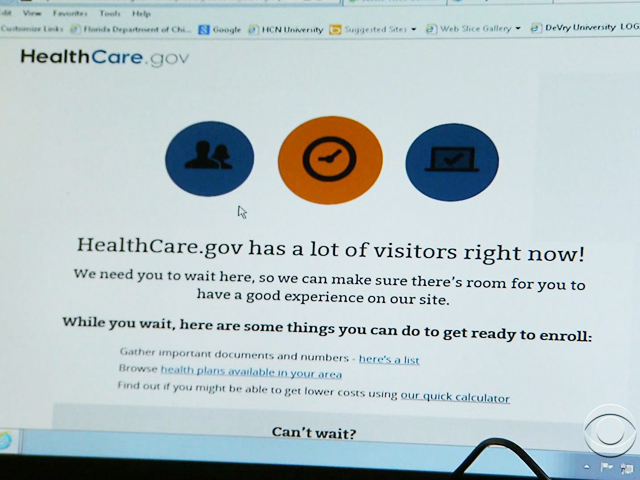 WASHINGTON -- The health care website faced its first big test Monday since the Obama administration said it met its deadline to make HealthCare.gov work smoothly for the vast majority of shoppers. Trouble since the site's debut in October has cut into enrollments.

CBS News learned that about 100,000 signed up online in November for a total of more than 206,000 so far, but that's 1 million short of the projected enrollment.

The administration says 375,000 people tried to shop on HealthCare.gov before noon Monday. Officials called that a strong sign of interest, but that high number created some problems.

When June Miles-Mays tried to sign up for Obamacare at a Miami health center, the website put her on hold.

"We need you to wait," the site advised, "so we can make sure there's room for you."

It was her third attempt at signing up.

"It's very frustrating to me, because I need insurance so badly, and it seems like something in the system or something is not working," Miles-Mays says.

The "need you to wait" prompt is a new feature of HealthCare.gov. When the system is overloaded, it puts applicants in a queue and promises an email when it's their turn.

Sebelius' Obamacare plea: Don't give up on us

But despite promises the website could handle 50,000 users at the same time, the queuing system was turned on Monday at approximately 35,000 users. Officials said they had to "maximize the smooth user experience" for those who applied first.

There are also potential problems for the thousands who have signed up for new plans. Officials are just now building the system for how insurance companies will be paid, and the companies say their enrollments are slow because of bad information coming from the government.

"They're still receiving files that are duplicative, including missing or inaccurate information, and in some cases, they are not getting those enrollment files at all," he says. "The concern that everybody wants to avoid is a situation where somebody thinks that they're enrolled, but in fact they're not."

The White House still argues the website is better than ever and is enrolling an average of several thousand people every day. Two months ago, 375,000 visitors would have crashed the system, but on Monday, it held up and was able to put people in line.

After trying to sign up on the website, June Miles-Mays finally filled out a paper application. She'll likely learn about her enrollment in a week or two.