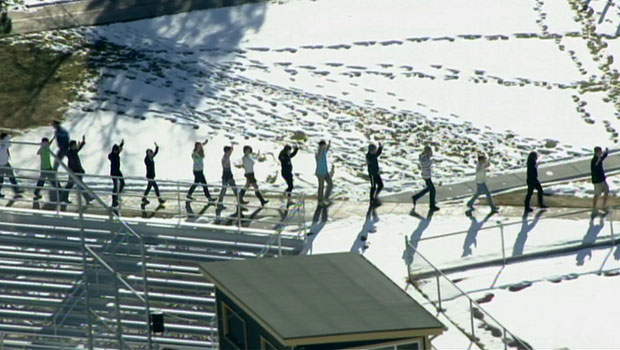 The student who police say opened fire inside a Colo. high school Friday brought a shotgun into the school and asked for a specific teacher by name, but ended up shooting a fellow student and, apparently, himself, said Arapahoe County Sheriff Grayson Robinson.

Robinson said that when the teacher heard the student was looking for him, he exited the building "in an effort to encourage the student to also leave the school."

Friday night Robinson identified the shooter as Karl Halverson Pierson, 18. Robinson said that authorities believe he acted alone and died from a self-inflicted gunshot wound inside the school.Two Molotov cocktails were apparently left behind in the school, the Associated Press reported.

Robinson said one of the devices found at Arapahoe High School detonated but the other didn't, according to the AP.

The sheriff said that the shooter "made no effort" to conceal his shotgun inside the school. Although initial reports indicated that he shot a student who confronted him, Robinson said Friday that the 15-year-old girl who was shot was "simply in the area of the shooter."

She was taken to a local hospital in critical condition and underwent surgery.

Robinson said authorities were in contact with the shooter's family.

"We will conduct a thorough and complete investigation...which includes a search of the suspect's home," said the sheriff.

The school was placed on lockdown and students exited the building with their hands up in a single file line. As each filed past law enforcement they were patted down and then allowed to put their arms down.

A shotgun that was found was the one believed to have been used in the shooting, said the sheriff. He also said that the shooter was "down" inside the school within 14 minutes of the initial call, which came in at 12:33 p.m.

According to CBS Denver, Arapahoe High School has more than 2,000 students. It is located about eight miles from Columbine High School, scene of a mass school shooting in 1999.

Tomorrow marks one year since the school shooting in Newtown, Conn. that claimed the lives of 20 first-graders and six adults at Sandy Hook Elementary School.